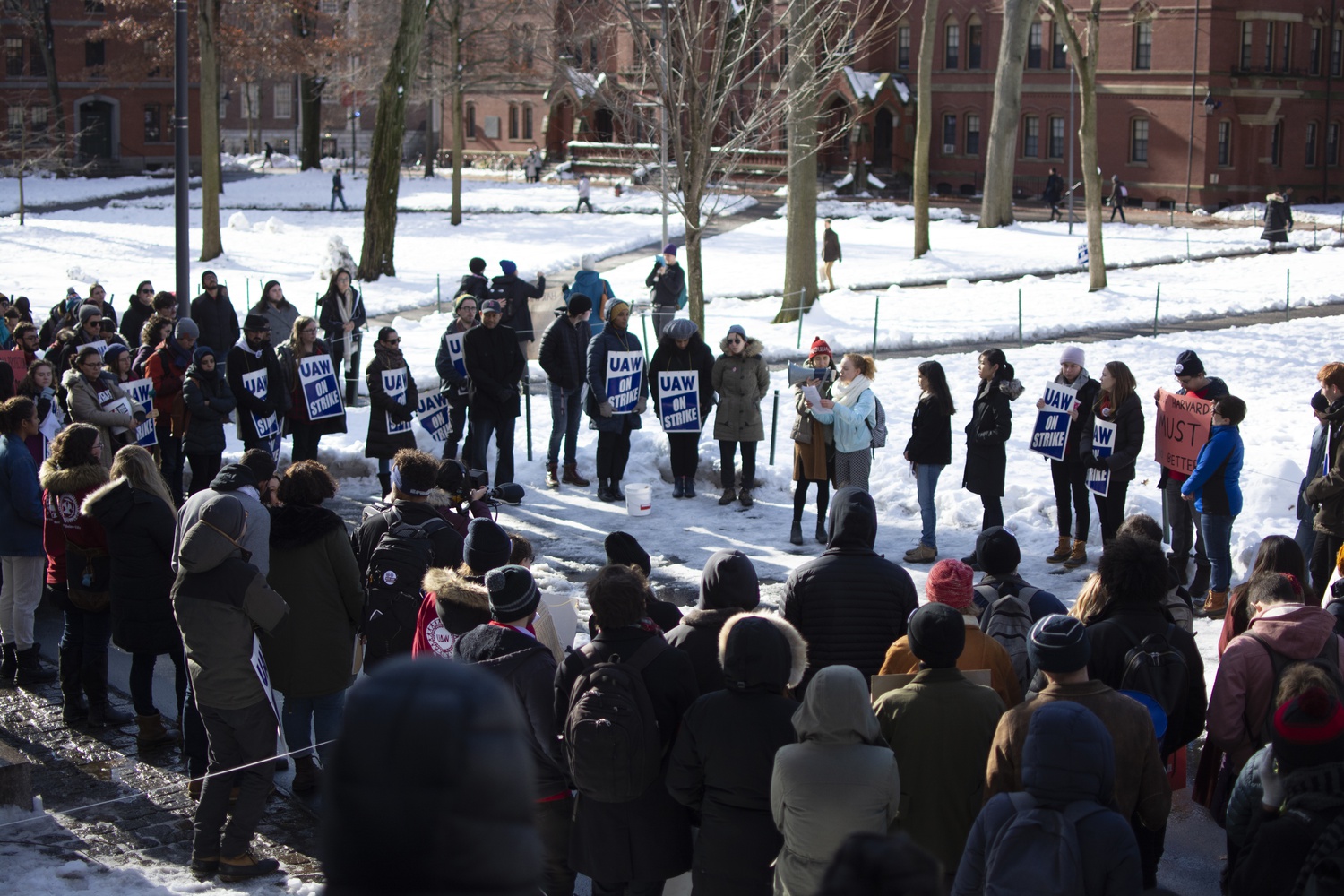 HGSU-UAW rank-and-file members — seen here on strike in December 2019 — who attended recent bargaining sessions with the University said they were disappointed in Harvard's positions. By Owen A. Berger
By Cara J. Chang and Meimei Xu, Crimson Staff Writers

After attending bargaining sessions with Harvard to negotiate the graduate student union’s second contract, rank-and-file union members said the University’s bargaining team was resistant to the union’s proposed changes, especially on the topics of compensation and procedures for handling complaints of identity-based discrimination and sexual harassment.

HGSU-UAW and the University have held four bargaining sessions since March 18, and agreed to open the bargaining sessions on April 9, April 19, and April 26 to union members. Approximately 40 to 80 members observed each of the three open sessions, according to HGSU-UAW Vice President Marisa J. Borreggine. The May 6, May 18, and May 24 sessions will also be open to observers, and more open sessions could be added.

“[At each session] you saw dozens of student workers who had the crimson background as a sign of solidarity and support for the union,” HGSU-UAW member and Law School student Sebastian B. Spitz said.

According to members in attendance, each side screenshares its proposed contract changes. Harvard and the union bargaining committee members then discuss the provisions. After proposals are made, the other party returns at a later session with its edits in a counter-proposal, which is discussed.

“When you see these documents, it’s quite visible in black and white and red,” Reeder said. “It stands out when the counter-proposal [from the University] is removal of all the [union’s] changes.”

Harvard spokesperson Jason A. Newton declined to comment on any criticisms from union members who observed the sessions.

HGSU-UAW is still calling for cases concerning discrimination, harassment, and academic retaliation to be open to third-party arbitration. Under the current contract, such complaints are “processed in accordance with the internal policies and procedures developed by the University or the individual schools.”

HGSU-UAW member and Slavic Languages and Literature Ph.D. candidate Maya A. A. Garcia said it was “frustrating” to see what she felt was the University picking apart or dismissing the union’s proposals. According to Garcia, seeing Harvard’s bargaining team face-to-face, though virtually, has been an “emotional experience.”

“There’s all these communication issues in the sense that their lawyers don’t take us seriously or question us to an extent that, if you aren’t super confident in yourself and the unionization effort, you might start to waiver,” Garcia said.

Five of the members who observed a session said they viewed union members’ access to third-party arbitration for complaints of discrimination and harassment as one of their top priorities for the contract. During the April 9 session, the union presented their proposal on this issue, calling for additional categories to be protected under the contract’s non-discrimination provision, such as caste, medical conditions, personal appearance, class and class background, accents, and prior criminal convictions.

Spitz, Garcia, and History of Art and Architecture Ph.D. candidate Juliana Ramírez Herrera criticized the University for extensively questioning the addition of these protected categories.

Spitz added he and other members were “very disappointed” that the University was “stalling” by asking for definitions of each category.

“It seemed to me like they were wasting time and that someone who’s representing Harvard University can figure out what the definition of caste is and what it is we’re referring to without having a 20-minute discussion,” he added.

Ramírez Herrera said she believes the University would only consider providing non-discrimination protection for these additional aspects of identity if the union provided precedent — from a previous contract or past instances of discrimination — to justify it, which she found “odd.”

“Why are we waiting for these instances to emerge for them to be then considered discrimination?” Ramírez Herrera said. “Why can’t we be proactive in foreseeing potential moments?”

At the April 26 session, the University rejected the union’s proposed changes to discrimination and harassment procedures, according to a union bargaining update. HGSU-UAW member and Population Health Sciences Ph.D. candidate Matthew M. Lee wrote in an email that he felt “disappointed, though not entirely surprised” by Harvard’s rejection.

The union also started introducing its economic proposals during the April 26 session, opening the negotiations with substantial proposed changes to compensation, such as an initial 9.74 percent wage increase. Members noted gaps between their experiences and the University’s positions on those issues, particularly regarding childcare and rent.

“You have to become a bit of a numbers person as a grad student in terms of budgeting,” Garcia said. “I kept track of every dollar I spent, every coffee I bought, and had strict limits on everything so that I could make that stipend work in the Cambridge market.”

Garcia said she plans on testifying at upcoming sessions about the necessity of compensation increases. Jennifer L. Cruz, a union member and Population Health Sciences Ph.D. candidate, said she does not believe the University is considering the toll rent takes on her livelihood.

“That is not acknowledged in these sessions,” Cruz said. “This is just a paycheck that they’re sending into the abyss and they aren’t acknowledging the impact that it has.”

The next bargaining session open to members is scheduled for Thursday. HGSU-UAW member Anna Yu Wang, a Music Ph.D. candidate, said she would like to see Harvard more willing to “empathize” with student workers in the future.

“I think that open bargaining is such an important way of maintaining accountability to how the University is approaching these negotiations,” Yu Wang said. “Their attitude, their disposition at the bargaining table, tells us a lot about who the University is and what their values truly are.”