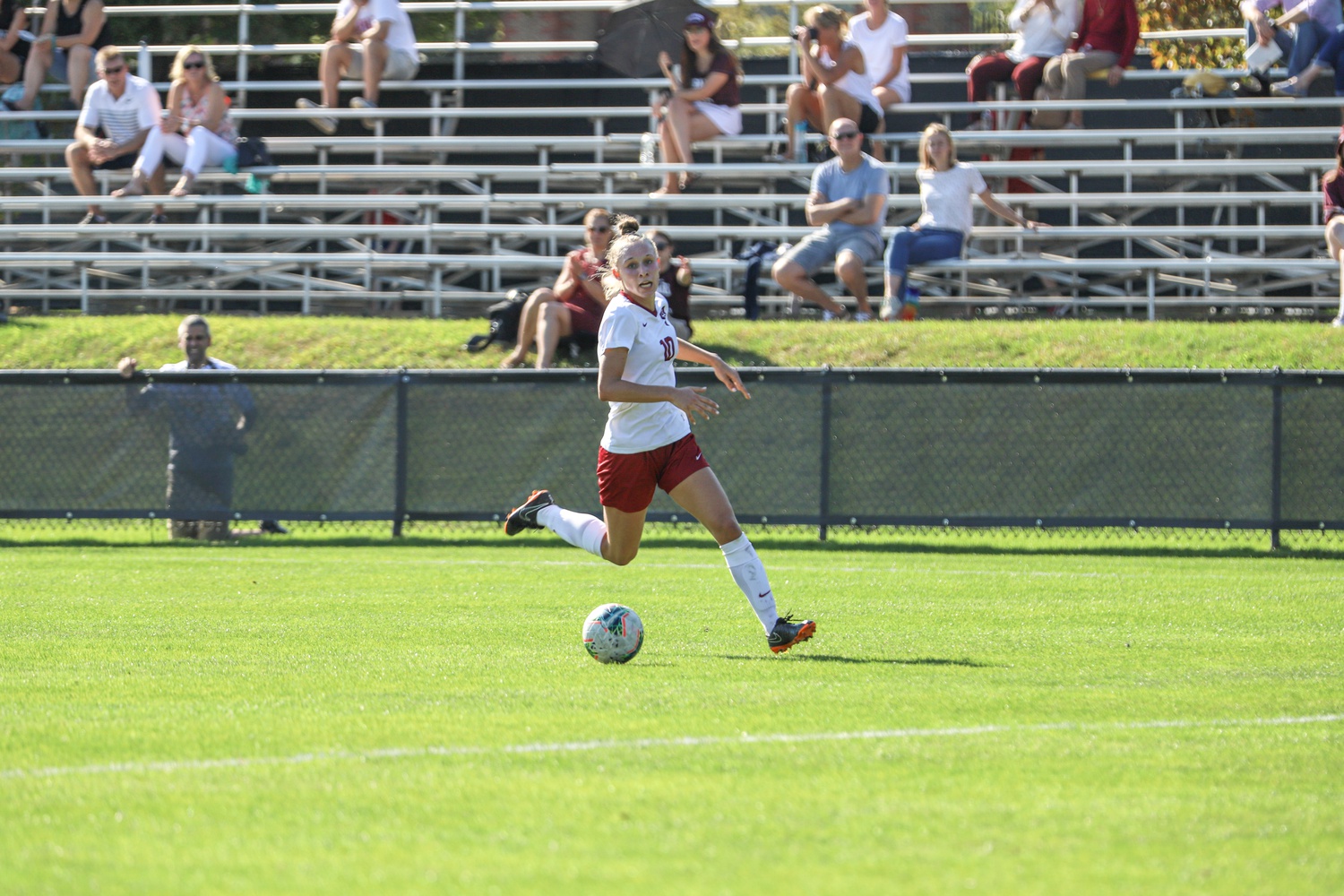 Angela Caloia, Friday's goal-scorer, will look to build off a first-year campaign that saw her find the score sheet 17 times in 16 games (six goals and 11 assists). By Quinn G. Perini
By Lev Cohen, Crimson Staff Writer

After a hiatus of nearly two years, Harvard women’s soccer returned to action on Friday with a 1-0 home win over Fairfield University in front of an enthusiastic crowd at Ohiri Field. The Crimson (1-0) dominated the game and could have scored much more than the goal junior forward Angela Caloia tallied in the 10th minute in what was the first home Harvard sports game since the onset of the pandemic, making it a monumental event for the women’s soccer team and Crimson sports as a whole.

“There were a ton of people at the game, there were probably over a thousand people there,” head coach Chris Hamblin said. “It was really, really cool. Such a fun environment to be in. It’s been great being back. The excitement and the energy are through the roof. The players have been bouncing off the walls with excitement to be back in preseason, to be back playing, back with friends.”

The fan support topped Harvard’s expectations, with Hamblin estimating attendance at over a thousand people. The onlookers provided an energy that the Crimson hopes will surround its season going forward.

“It was pretty surreal,” junior captain Sophie Hirst said. “I know I was anticipating it a lot over the past two years, not being able to be with the team at all in person. Then on Friday when we got to suit up, it was very, very cool to see how many people were just as excited as we were to see sports return to campus. We had a great crowd and so much support, and there’s nothing more fun than to play in front of so many people. I was not expecting it to be so amazing for our first game out, and it just really made it cool for us.”

Harvard treated its fans to a strong all-around performance. The Crimson conceded only three shots against the overmatched Stags, making it a relatively easy day for goalkeepers junior Hannah Gardner and sophomore Anna Karpenko, who combined for the shutout. Harvard controlled possession and peppered 22 shots at Fairfield’s goal, with first-year forward Ainsley Ahmadian leading the way with seven shots in her first collegiate game.

Caloia, the Italian U19 international who burst onto the scene in her first year in 2019 with six goals and 11 assists in 16 games, broke the early deadlock with an opportunistic dart into the box. She capitalized on a defensive misjudgment by Fairfield, running onto a bouncing ball and producing a tidy first-time finish past the Stags’ goalie from about 10 yards out. Sophomore midfielder Megan Mackey later hit the post as the Crimson ratcheted up the pressure, but Harvard would not be able to add to its lead.

The Crimson’s performance was not as smooth as Hamblin would have liked, something that he said was only natural in all of the participants’ first competitive college game in a year and 10 months.

“The energy was exceptional — we were the first team back in, and there were probably some things that a calmer approach would have helped us solve sooner,” Hamblin said. “But I think in the grand scheme of things, it’s really difficult to take a group that hasn’t played in two years and have them be calm. I don’t think it’s possible. But I think having that first game under our belt and learning from some of the things that we could have done better has been really helpful the last few days.”

As would be expected after two long years, the Harvard lineup featured a lot of new faces. Four first-years started and five more first-time players got substantial playing time off the bench. Among the underclassmen are a litany of players with experience on their respective senior national teams, including Danish midfielder Josefine Hasbo, Canadian defender Jade Rose, and Iceland teammates Hildur Hakonardottir and Aslaug Gunnlaugsdottir.

Integrating the geographically diverse group of new faces has been a priority for captains Jillian Wachira and Hirst.

“We’re trying to incorporate everyone’s experience, and we’re trying to make sure that everyone feels comfortable,” Wachira said. “I think we’ve done a really good job of setting aside time for team-bonding activities and really just trying to get to know our underclassmen.”

Also returning are most of the Crimson’s standout stars from a team that lost just three games and nearly won the Ivy League title in 2019, including Caloia, senior midfielder Murphy Agnew, Hirst, sophomore forward Gabby DelPico, and junior midfielder Lara Schenk. The result is a roster deep with talent and experience, and one that hopes to get over the hump and win its first Ancient Eight title since 2016, a hunger that was only intensified by the season nixed by the pandemic. 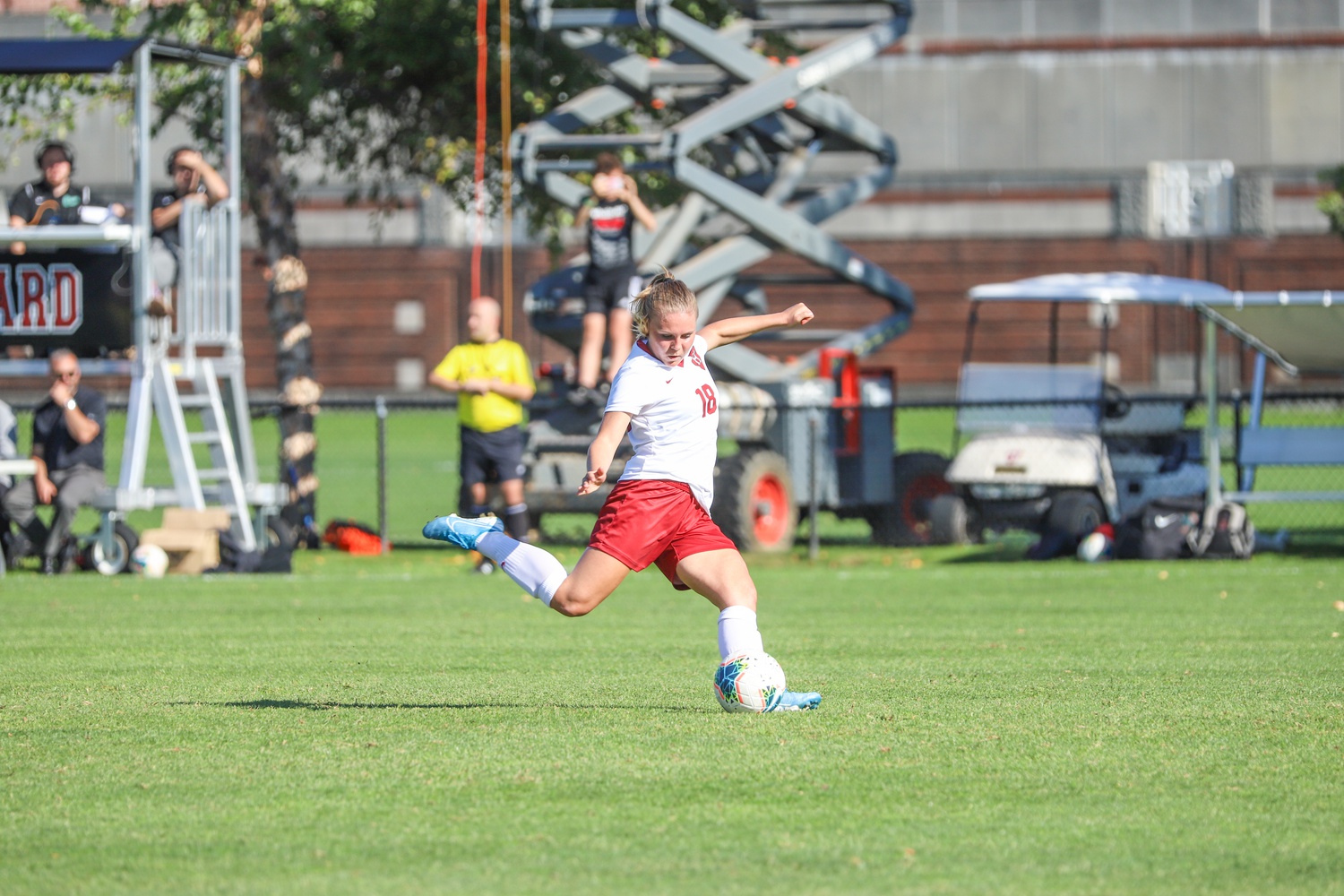 Lara Schenk, a key contributor to the 2021 Crimson squad, steps into a strike during the 2019 campaign, the end of which was the last time on the field for Harvard before last Friday. By Quinn G. Perini

“For us, winning a ring — we lost a year basically and we haven’t won a ring in a while, so that’s definitely at the forefront of everyone’s mind,” Wachira said. “After the tough time we’ve had apart, that would be the cherry on top, to come back and have a successful season and win the Ivy League we’ve been itching for for years now.”

Given the team’s depth and talent, the Crimson should have a good chance to do what they could not in 2019. Harvard returns to action on Thursday at Boston University before coming home to face St. John’s University in what will be only the second-ever meeting between the teams.