‘You Belong Here Now’ Review: A Casual Read Lacking a Touch of Detail 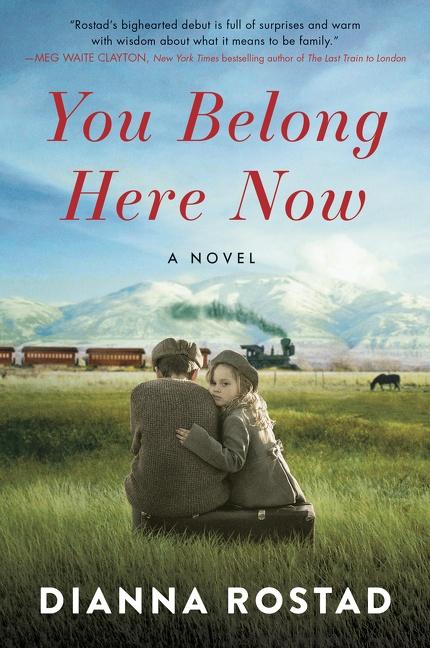 “You Belong Here Now,” Dianna Rostad’s debut novel, tells the story of three orphans from New York who are welcomed into a cattle-farming family in Montana. Released in early April, the book is a casual read that should appeal to a wide audience, though pickier readers might find the novel slightly less attractive for its lack of detail and sophistication.

As its title might suggest, “You Belong Here Now” is a book primarily about family and belonging. Set in 1925, the story alternates between narration from the perspectives of Charles — the oldest of the three orphans with a dark and obscure background — and Nara — the youngest daughter in the Stewart family. The book begins as Charles, Patrick, and Opal flee from the “orphan train,” a trip to help find homes for orphans out west, for fear of being sent home to the New York hell they have just escaped. When Charles tries to steal a horse to help the group along on its journey, he is caught by Nara, whose family decides to let the three children work at the ranch as punishment. As one might expect, the orphans’ stay on the Stewart ranch lasts longer than planned, and they are slowly welcomed into the family.

When reading this novel, it is clear that Dianna Rostad has made a concerted effort to make her story accessible to a wide audience. Her novel is made easy to read by her simple and direct language, and its underlying themes are not difficult to pick out. Rostad steers clear of any plot elements that might be too suggestive or traumatizing for a young audience and limits herself to only a handful of expletives — which, frankly, the book could even do without.

But perhaps what broadens the appeal of “You Belong Here Now” is its cast of characters, which includes kids, teens, adults, and even seniors. All of these characters struggle with their own unique conflicts as the plot moves forward, giving readers of all ages a figure with whom to identify and from whom to learn.

Unfortunately, this bounty of characters also reveals one of the novel’s biggest weaknesses. Indeed, the characters and conflicts that Rostad introduces into her book are so numerous that they can be hard to follow. With so many characters, she is simply unable to dedicate the time to develop each to its fullest. The book’s character development lacks nuance, and any growth or change seems almost forced. Even Nora and Charles feel underdeveloped at the end of the novel. As a result, “You Belong Here Now” finds itself missing the element of verisimilitude that would make its story that much more moving.

The characters, however, are not alone in lacking detail. The setting of the novel also feels rather undeveloped, and the book goes far too long without giving the reader any clear indication that its action takes place almost a hundred years ago. There is also significant sensory detail missing from descriptions of the Stewarts’ farm and the surrounding Montana landscape. This is a shame, as Rostad’s choice to favor simplicity has left the novel without the descriptions of the breathtaking Montana mountains, fields, and farms that would really transport the reader into this story.

The plot, too, suffers from a lack of refinement. Though at times it can be touching or suspenseful, the plot’s shifts feel abrupt, jumping and skipping between the uncountable conflicts Rostad has tasked herself with managing. Some plot elements, such as Charles’ inability to control his temper and violence, feel belabored, and the timeline also feels unrealistic: It is truly hard to believe that Charles would become a near expert rancher after living with the Stewarts for less than a year.

In the end, “You Belong Here Now” is a novel that suffers from a paradox of complexity: at times too simple, and at others too complicated. Its plot, characters, and setting feel underdeveloped, but mostly as a result of Rostad’s attempt to cram too much into what would have been better left as a simpler story. On the other hand, her language is easy to read, and all the many characters offer each reader, no matter their age, someone to relate to.

The bottom line: If one can overlook Rostad’s problem with detail, then “You Belong Here Now” is indeed a novel worth reading.