Double Overtime Ends in Heartbreak for Men’s Soccer as Harvard Falls to Northeastern, 2-1 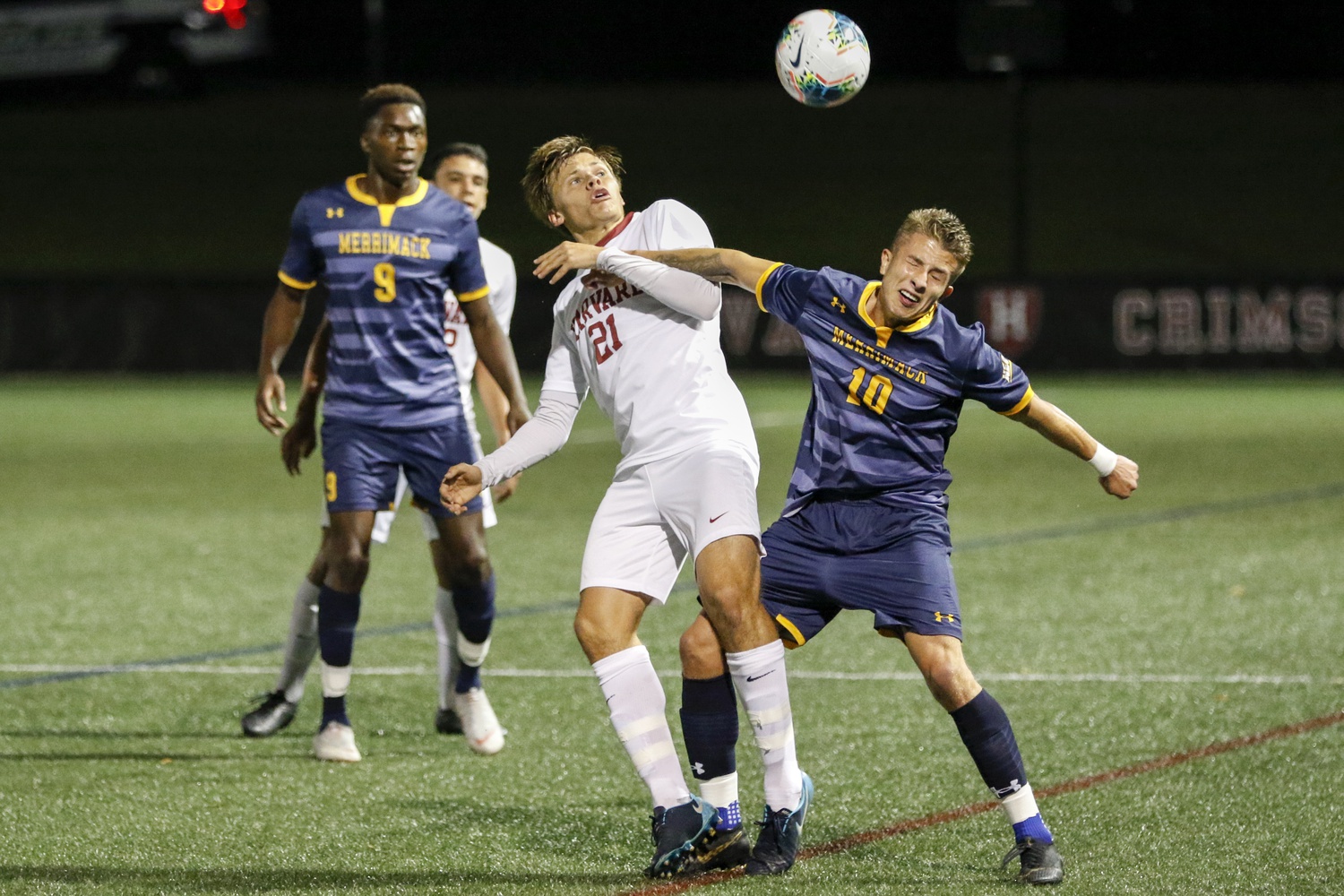 On Tuesday night, Harvard played out a heartbreaking 2-1 extra-time loss versus Northeastern in its first game back on Jordan field since 2019. There was no shortage of action for fans in attendance, as the game featured a red card, a saved penalty, and multiple disallowed goals, but the crowd ultimately was not able to rally the Crimson to a victory.

Despite holding out for 54 minutes while down a man, Harvard (1-1-1, 0-0 Ivy) was not able to hold on for the tie against cross-town rivals Northeastern. Following an intense first period of extra time, the Huskies headed home a corner in the 103rd minute to end the match and break Crimson hearts.

Harvard was reduced to ten men early in the second half after senior forward Alfred Perez was shown a straight red card for a two-footed tackle in the 49th minute. Tempers flared following the challenge, as the Northeastern players got in the face of Perez as he pleaded his innocence, but no further action was taken by the referee, and the Crimson was down to ten players.

“We make a mistake, and we get punished for it, and then it was all about resilience and fight and grit,” coach Josh Shapiro said. “And I think our group showed a ton of that. So you know, obviously not ideal and a loss is never good, but there are things we can take from that that we feel good about.”

The game had gotten off to an uneasy start for Harvard as the Huskies nearly took the lead with only twenty seconds played. Northeastern thought it had found an early lead following a scramble at the back for the Crimson which ended with senior forward Dan Munch finishing into the bottom corner, but the goal was disallowed as the referee had called a foul just outside the box on the preceding pass. The Huskies hit the post on the ensuing freekick and had the rebound cleared off the line by first-year Crimson defender Jan Riecke, all within the opening 30 seconds.

After the game settled down, Harvard took the lead through sophomore midfielder William Ebbinge, the first goal of the season for the Queenstown, New Zealand, native. Ebbinge shot from just inside the corner of the box after being played in by senior midfielder Cornelius Bencsik, with his shot squeezing through the arms of Northeastern’s goalkeeper and into the back of the net to put the Crimson up 1-0.

The pace of the game changed following the red card, as what had been an end-to-end affair became more lopsided. Harvard dropped into a more defensive shape and tried to break on the counter as the Huskies took the lion’s share of possession. Despite sitting back, the Crimson remained dangerous, registering four shots in the second half, two of which were on target.

Northeastern eventually took advantage of its numerical superiority, leveling the game in the 63rd minute. Senior forward Benjamin Klingen picked up the ball at the edge of the box before turning, cutting inside, and firing into the far corner to level the game at 1-1.

The game was almost decided in the 90 minutes of regulation as the Huskies were awarded a controversial penalty kick in the 87th minute. Northeastern crossed a ball from wide which hit senior defender Fernando Docters in the arm, who was standing just inside the box on the endline. Harvard players immediately mobbed the referee, as the arm seemed to be in a natural position, but he would hear no appeals on the call.

The referee had to check with the linesman to confirm Docters was in the box, but the call stood, and the Huskies had a chance to end the game in regulation. Junior goalkeeper Oskar Nilsson had other plans though, as he came up with a strong save on his right side to keep the Crimson in the game and continue his great run of form.

Despite the heroics of Nilsson and the boost Harvard gained from it, the Crimson could not hold on for 20 minutes of extra time, eventually falling in the 103rd minute to a powerful header from a corner.

“If you’re able to steal a draw there, then there's so much resilience to gain from that. But regardless, we hung on for 54 minutes in a really difficult situation,” coach Josh Shapiro said. “There's a lot of positives we have to be able to take away from this. This is gonna hurt, it should hurt, when you lose a game like this, when you've left it all on the line. At the same time, I think there are things we can take from it.”

Harvard heads back on the road for its next time out, facing Quinnipiac in Hampden, Conn., on Saturday at 2 p.m.