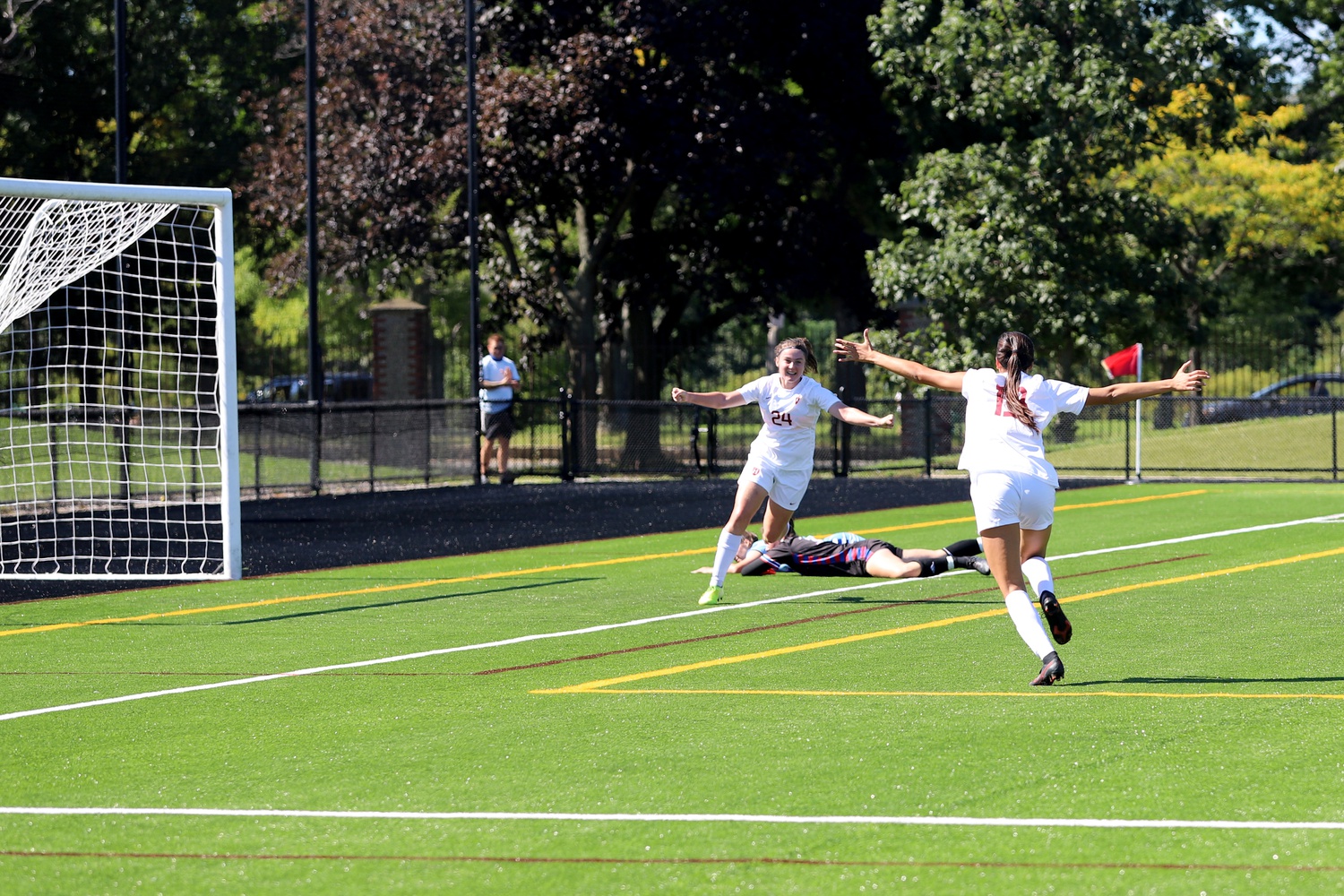 Harvard women’s soccer defeated Kansas 2-1 at Jordan Field on Sunday in a tight, cagey affair marred by several injuries. The Crimson maintained its undefeated record, improving to 6-0-1 in its final game before Ivy League play kicks off next Saturday.

Harvard (6-0-1, 0-0 Ivy League) did its damage in the first half, with junior Ava Lung and sophomore Megan Mackey scoring their first career goals about 13 minutes apart. First, Lung pounced on a loose ball in the box following a corner by first-year Hannah Bebar and scored past the Jayhawks’ goalie. Then, with under 30 seconds left in the first half, Lung found Mackey, who finished well into the side netting to increase the lead to 2-0.

“It was nice that I got on the end of the scoresheet for my first collegiate goal,” Mackey said. “It’s hard work paying off, especially since we have such a competitive squad, it’s nice to get on the field and take an opportunity to show what I can do.”

Mackey played a season-high 56 minutes off the bench on Sunday and was one of 11 Harvard substitutes to contribute at least 15 minutes as the Crimson was stretched thin by injuries. The center back partnership of first-year Jade Rose and junior Lara Schenk again played the whole 90 minutes as they continue to develop a good defensive understanding. Schenk has played all 673 of Harvard’s minutes this season and is the only one to play over 600.

As has been the case in several games this season, the Crimson controlled the first half, had the better chances, and earned a halftime lead. But Kansas (5-4-1, 0-0 Big 12) fought back in a big way in the second half, and Harvard made a few defensive mistakes. The most glaring of which was an error by junior goalkeeper Hannah Gardner that led to the Jayhawks’ lone goal about halfway through the second period. Kansas’s Maggie Gagne pressured Gardner, forced a turnover, and deposited the ball into an open net.

Kansas then had a few chances to tie the game, the best of which was a shot that blazed over the net in the 85th minute. In all, the Jayhawks registered 11 shots in the second half after taking just two in the first stanza. Kansas upped the intensity in the second half and as a result found much more space in the final third. The Jayhawks might feel unfortunate not to have tied the game.

“It was kind of what we expected, which was a battle,” head coach Chris Hamblin said. “Actually it was probably more of a battle than we expected because we took some lumps in that game, more than we would have liked to. But very proud of how we started the game, we put them on the back foot, created some good chances. And I think we dictated play for the first half an hour.”

In the end, the Crimson withstood the pressure and held on to the 2-1 lead, ensuring that it would end its non-conference schedule undefeated despite some uneven performances.

“They showed up on day one, competed, and we’re really proud of the effort,” said Hamblin, summing up the non-conference season. “We keep finding ways to win and that’s a good thing to have.”

Harvard lost four players to injury in the game, including two attackers, senior forward Murphy Agnew and first-year forward Ainsley Ahmadian, in the first 10 minutes. Then, later in the first half, influential first-year midfielder Josefine Hasbo took a cleat to the face and had to depart the game. In the second half, substitute goalkeeper Anna Karpenko, who came on at halftime, collided hard with a Kansas player and remained on the field for a few minutes before being helped off the field. The prognosis for the quartet of injured Crimson players is unclear, but none returned to the game.

Harvard returns to action next Saturday when it begins the Ancient Eight season with a home game against Penn. The Crimson defeated the Quakers 1-0 in the teams’ last matchup in 2019 and will look to improve to 22-7-3 in the all-time series. Stout defensive performances have characterized past Harvard-Penn matchups as there have been just three total goals scored in the last four games between the two teams. However, the Crimson has given up a goal in five consecutive games after starting the season with two clean sheets, so the squad will look to tighten up its defense as the Ivy League season gets underway. If the past is any indicator of Saturday’s contest, then the game with the Quakers could provide Harvard that opportunity.