Women’s Volleyball Bounces Back from Loss to No. 13 Oregon, Defeats Howard and American 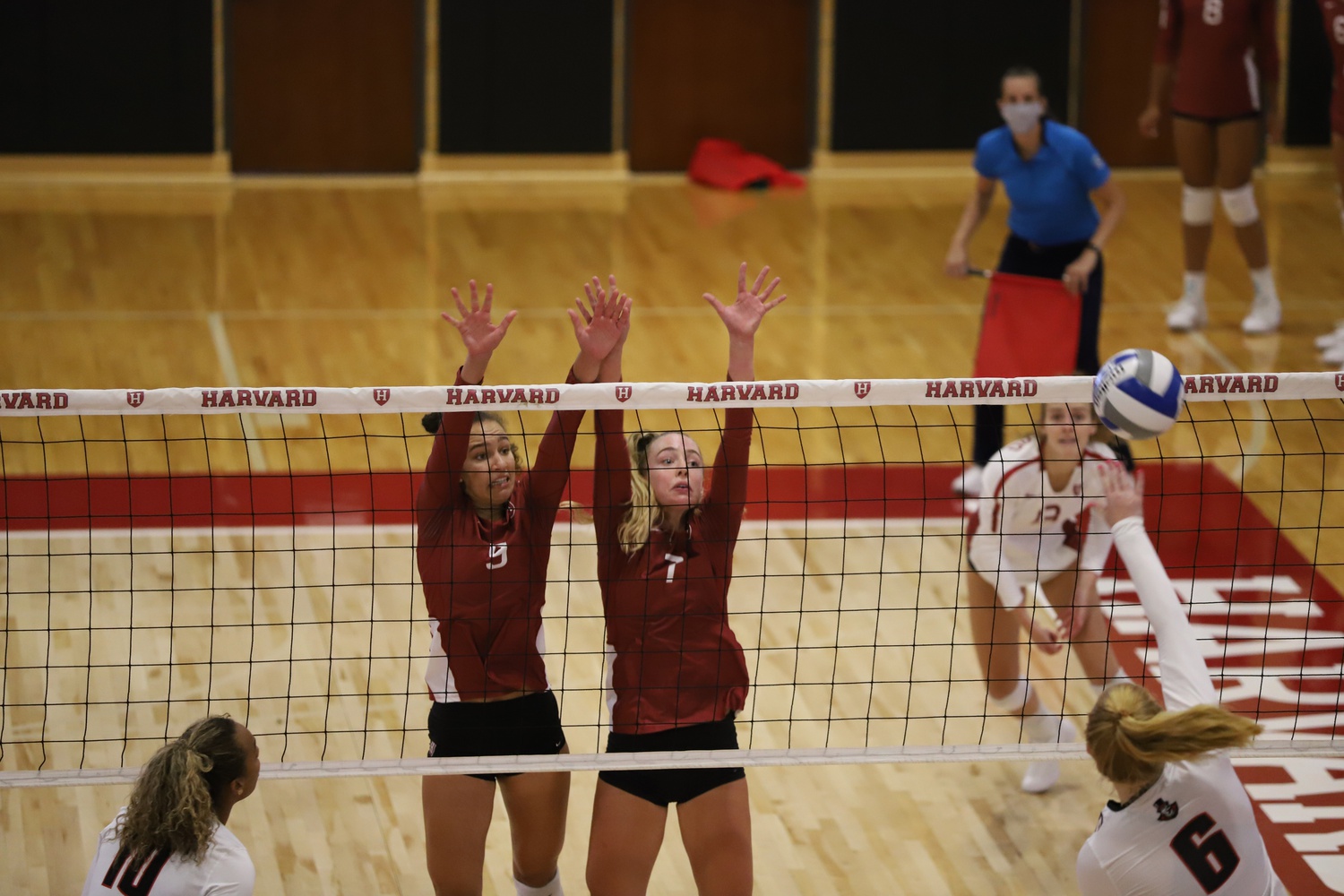 Time stood still as first-year outside hitter Corrine Furey soared through the air, drawing back her hand. Flinging it forward, she spiked the ball, sending it sailing past the outstretched arms of the opposing team’s libero before hitting the floor. With this kill, Harvard (3-6, 0-0 Ivy League) erased a two set deficit to defeat American University (5-6, 0-0 Patriot League) and capped off its triple-header at the Howard Invitational in Washington, D.C. this past weekend.

American had gotten off to a quick start, winning a tight first set 25-21 and carrying this momentum into the second by stunning the Crimson 25-13. The third set would prove to be a different story, however.

“We [made] changes in different matchups, and that...clicked for us,” said Harvard head coach Jennifer Weiss. “We did start out slow, we made mistakes right off the bat, and those unforced errors got [us] in a little hole,” she admitted, “so we made adjustments.”

By rotating her players on the court, Weiss gave the Eagles matchups with different, unfamiliar Crimson passers and blockers. This switch allowed Harvard’s outside hitters to take control of the match. Along with Furey, who ended the contest with eight kills, sophomore hitters Katie Vorhies and Ashley Wang produced 16 and 10 kills, respectively. Junior attacker Jaimie Rao also contributed 15 kills in the come-from-behind win.

In the third set, it was now the Crimson’s turn to get out to a quick lead of 6-2. Although American University made a comeback, evening the score at 9-9, Harvard managed to build off their adjustments and cut back on unforced errors to seal the set, 25-20.

The fourth set saw the teams trading blows, with one team never gaining more than a three-point advantage over the other. Harvard went on a five-point streak, going from 6-8 to 11-8 with crucial kills and blocks from Vorhies and fellow sophomore hitter Olivia Cooper. Nevertheless, American slowly stopped this slide and evened the score at 19-19. Two kills from Furey and Wang, however, would eventually end the fourth set, 25-22. Weiss’ strategy was proving successful.

One specific example of taking American out of its comfort zone came with the substitution of junior setter Bella Almanza. Along with 20 assists, she fired off three service aces, providing the team with some much needed momentum.

“[Almanza] served so aggressively, and it got us ahead,” Weiss recalled. “Everyone was excited for her, and the energy was really positive around that. She runs a little bit of a different offense, so that was a big shift,” especially because it occurred in the middle of the match.

Regardless, the junior, along with the other upperclassmen, provided much needed leadership for a young Crimson team of which eight of the 16 players had never played in college before this season.

“Our upperclassmen have the experience of what it’s like to be on this Harvard volleyball team, and they’re a key part of our success,” Weiss commented. “[Almanza] has that experience and that confidence and court awareness to [serve aggressively]. The mentality [of the team] is to compete, so I think that shifted for us in that we got out on a high note, we took [the Eagles] out of their offensive system, and they couldn't run what they wanted to run...because we served at them really well.”

The Crimson would need all of the experience it could muster, as the beginning of the decider was also gridlock. American erased Harvard’s early leads of 6-3 and 8-4, and the Eagles pulled within two points of victory at 13-11. Kills from Rao and Furey brought the score to 13 apiece, and a missed spike from an American hitter and Furey’s final hit ended the five set brawl.

Playing from behind was the theme throughout the invitational. The team fell behind in its first match on Friday against No. 13 Oregon (8-1, 0-0 Pac-12), with the Ducks handily claiming the first two sets 25-14 and 25-19. The Crimson was not discouraged from its slow start, though.

“We had a good attitude,” said Vorhies when discussing the challenge Harvard posed for one of the top-ranked teams in the nation. “Once we got into those first couple sets, we [realized] we had nothing to lose. Our energy level elevated, and we [got] excited for each other and were competitive about every single point.”

The Crimson fought back to win the third and fourth, both 25-23, benefitting from 16 and 15 kills from Vorhies and Rao, respectively. Defensively, first-year libero Lindsey Zhang notched 14 digs, while first-year outside hitter Nicole Prescott saved 11. The team lost in a tight decider 16-14, however.

“I think our energy outmatched Oregon’s, and once we had that element we were able to bring it into the next two matches,” Vorhies concluded.

In the second match of the day, Harvard faced off against Howard University (1-8, 0-0 MEAC). Once again, the Crimson dropped the first set, 23-25. The team quickly adjusted and battled through fatigue, winning the next three sets 25-23, 25-21, and 25-21. Prescott hit a team-best 17 kills along with 14 digs, and many of the team’s other first-years and sophomores posted double-digit assists, kills, and digs.

With nine games under its belt, the team is looking forward to starting Ivy League play on Friday against a strong Dartmouth squad.

“I think we got better every day during...the preseason of non-conference competition,” Weiss asserted. “Dartmouth’s a good team right now, winning a lot of matches, so we’re going to come up with a good game plan, set it up, and go after it, both offensively and defensively.”

“I feel like we really unlocked a new level of energy and competitiveness this past weekend,” Vorhies said, “and we’re all excited to take that into Ivy League games this season.”