Men's Soccer Prevails on the Road at Merrimack, Improves to .500 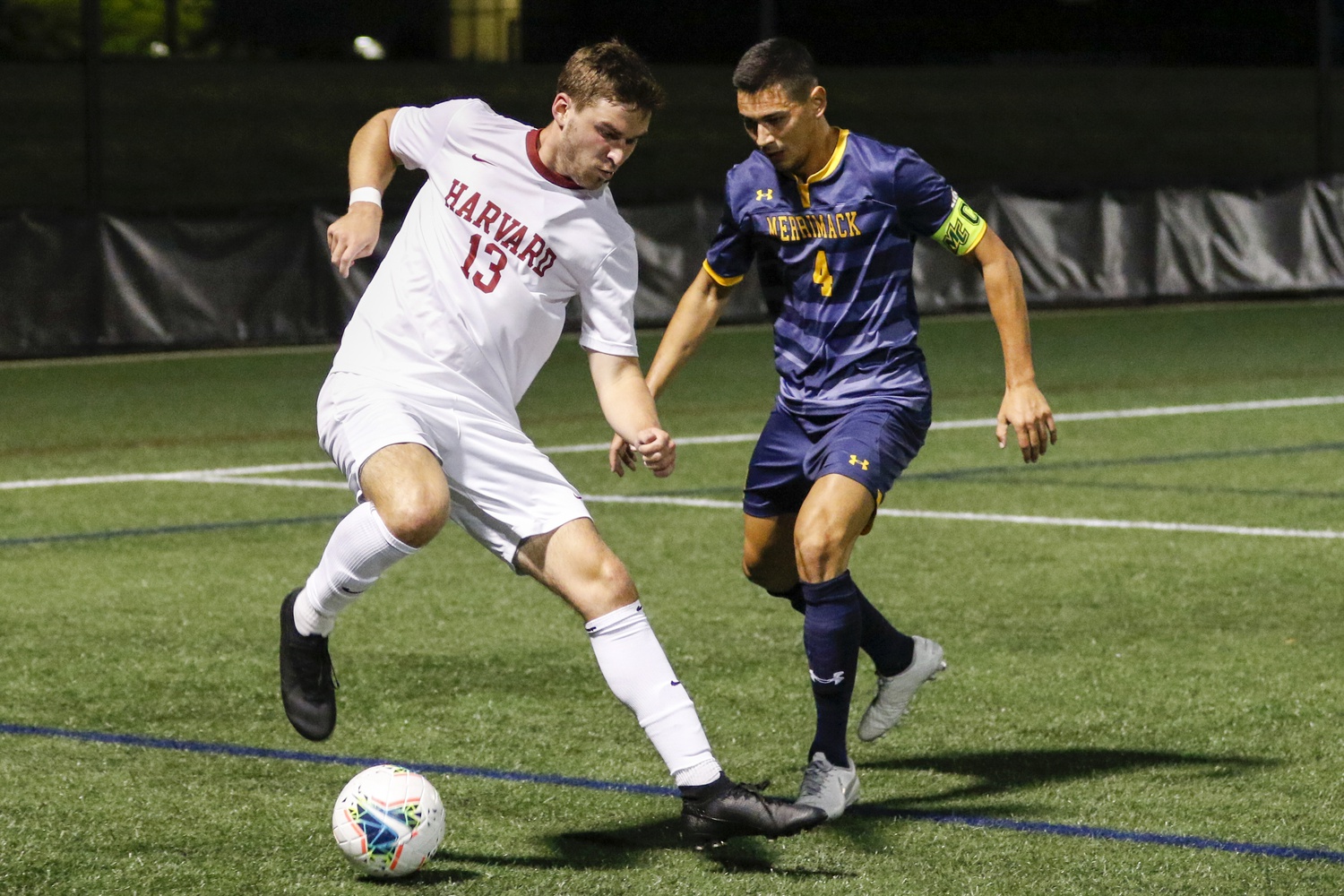 Playing its physically closest away game of the season, Harvard (2-2-1, 0-0 Ivy League) pulled back up to .500 in a night to remember for the visiting squad. Junior goalkeeper Gianluca Trofa made his mark in his first full game for the Crimson, notching an assist as well as 12 saves, one of which came on a penalty kick.

“As a collective, we were able to deal well with their high press, not giving risky opportunities in dangerous areas,” Trofa said of the match. “The back line and defensive midfielders fought with everything they had for tonight’s result.”

Trofa kept Harvard ahead early on in the second half after Merrimack was awarded a penalty in the 48th minute, following a handball in the box from first-year midfielder Marko Isakovic. Trofa got down quickly to his right side, extending a strong hand to push the kick out for a corner and keep the Crimson up 1-0.

Harvard had opened the scoring in the 35th minute, after first-year forward Alessandro Arlotti rose above the opposition on a corner kick to head into the back of the net and put the Crimson ahead 1-0. Senior midfielder and captain Paolo Belloni-Urso notched his first assist of the season on the play, whipping a dangerous inswinger into the six-yard box which left the opposing goalkeeper in no-man’s-land, allowing Arlotti to do the rest.

A strong performance at the back kept Harvard in the game in the face of continued pressure from Merrimack. The Warriors registered 25 shots, 12 of those on target, all of which were saved by Trofa. Merrimack was also awarded 11 corners on the night, compared to the Crimson’s eight.

This strong backline performance was again anchored by the young center back partnership of first-year Jan Riecke and sophomore Nik White, who have played every minute of Harvard’s last four games. They were, as usual, flanked by senior Havard Hjermsted and captain Fernando Docters, who held strong defensively and provided width for the Crimson’s attack.

“Jan and I have definitely formed a great partnership at the back. We support each other on the field and are good friends off of it,” White said of the partnership. “Our back line unit as a whole has been very strong thus far — something we want to ensure holds for the remainder of the season.”

Trofa capped off a dream full-game debut for Harvard in the 79th minute as he registered his first assist in a Crimson jersey. Following a back pass from Riecke, Trofa took a touch and launched a ball upfield that would make Andrea Pirlo or Steven Gerrard proud. Senior forward Alfred Perez picked the ball up just outside the Merrimack box and finished with his second touch past the Warriors' keeper for his first goal of the season.

“We started brightly and kept the ball well in Merrimack’s half. We were very focused defensively and didn’t give them much — but when they did have chances, Gigi came up big for us,” White continued. “Collectively, I thought we had an excellent first half and battled hard to secure the road win in the second.”

The Crimson heads back home for its second home game of the season to face Vermont at Jordan Field on Friday. Kickoff is set for 7 p.m. in the last non-conference home game before Harvard kicks off Ivy League play.