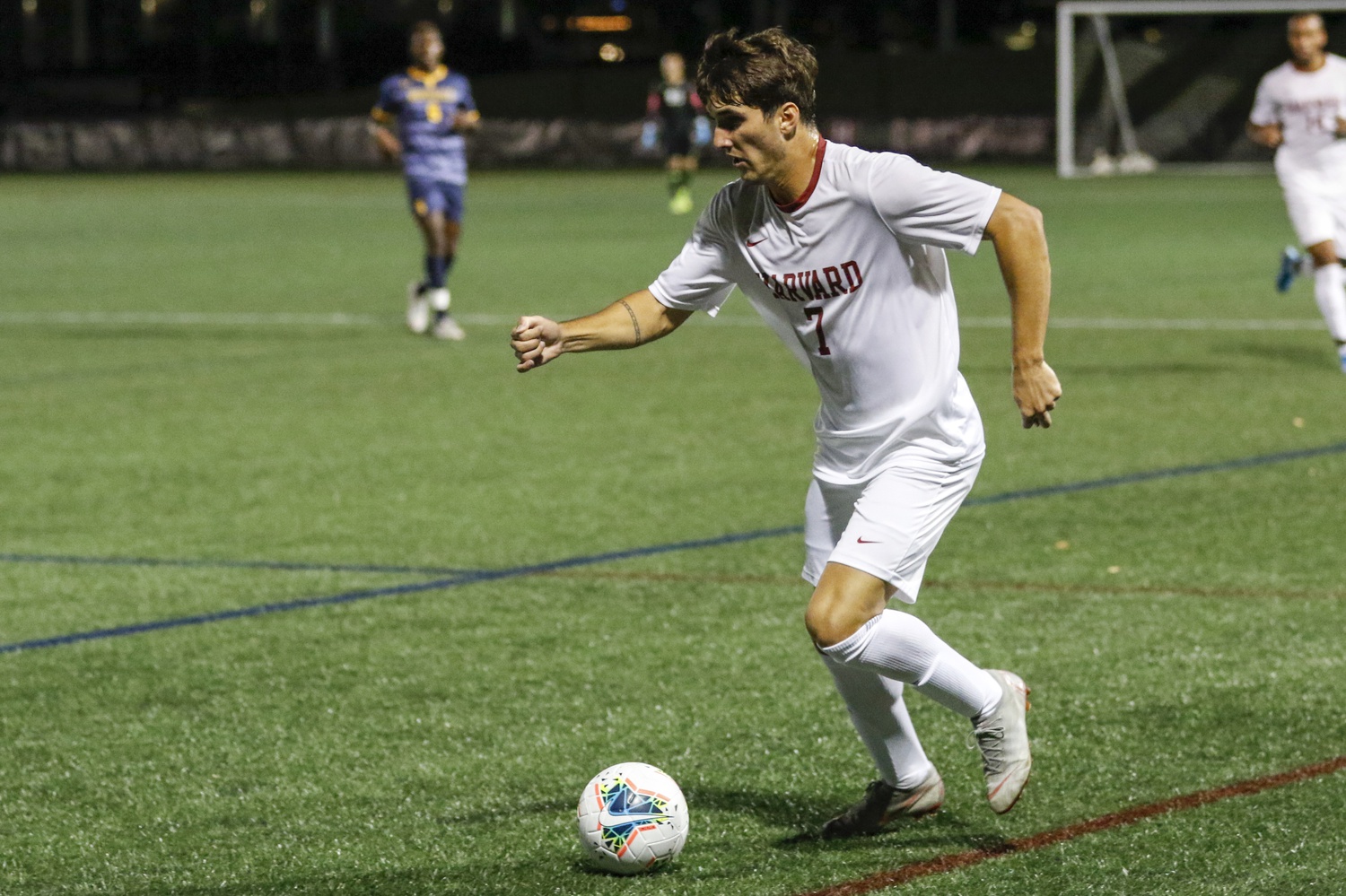 Harvard was victorious in its first match since Nov. 16, 2019, as it cruised to a 4-0 victory over Central Connecticut State University on Sunday. The four-goal margin was the Crimson’s largest victory since 2016, and its largest opening day victory since 2002.

“It's been two years, so we're very excited,” said senior midfielder and captain, Paolo Belloni-Urso. “We've been waiting for this moment to get on the pitch all together, and it was an exciting game. We had a lot of new players come in, and we had the right kind of chemistry. I think they played well, and we got the result we wanted.”

Harvard (1-0-0, 0-0-0 Ivy) wasted no time in getting on the board, with first-year forward Alessandro Arlotti opening his collegiate account only a minute and a half into the game. Arlotti rose higher than the opposition to connect with a cross from senior midfielder Cornelius Bencsik after the Crimson took its first corner of the game short.

Arlotti had his hand in a second goal less than five minutes later as he found junior forward Martin Vician on a perfectly timed overlap run into the box. Vician would do the rest by firing into the bottom corner to make it 2-0. Harvard showed its speed and counter-attacking prowess on the goal, taking the ball from its own box to the opponent’s in a matter of seconds.

“We have a very talented attack this year — we have depth,” senior striker Alfred Perez said. “We just followed what the coaches told us, and things started flowing for us early.”

It was the mixture of experience and young talent that proved to be the winning formula for the Crimson on the night. In fact, Arlotti was one of nine Harvard players making their collegiate debut. Among the others getting their first college minutes was sophomore defender Nick White, who opened his goalscoring account by following up on a loose ball in the box in the 71st minute to seal the game at 4-0.

“A lot of our players didn’t have college experience, but their excitement and them wanting to play definitely helps us a lot,” Belloni-Urso said. “It gave us the energy we needed to perform the way we did.”

Junior forward Duncan Sutherland also got in on the goalscoring action after Central Connecticut’s keeper failed to get strong hands on a cross just before halftime. With the keeper off his line, Sutherland chipped the ball over the goalie and two defenders on the line to give Harvard extra breathing room going into the half at 3-0.

While the weather got progressively worse over the course of the afternoon, the Crimson stayed disciplined on defense throughout. Junior goalkeeper Oskar Nilsson racked up seven saves in 75 minutes, before making way for fellow junior keeper Gianluca Trofa, who made one save and maintained the clean sheet.

It was a day of firsts all around for Harvard, as new head coach Josh Shapiro picked up his first win in his first competitive match at the helm. He joins the Crimson after ten years with Tufts, where he racked up four Division III national titles in that period, in 2014, 2016, 2018, and 2019.

Harvard heads down to Rhode Island to face Bryant University this Saturday at 1 p.m., before returning home to host Northeastern at 7 p.m. on Tuesday in the first men’s game at Jordan Field in almost two years.