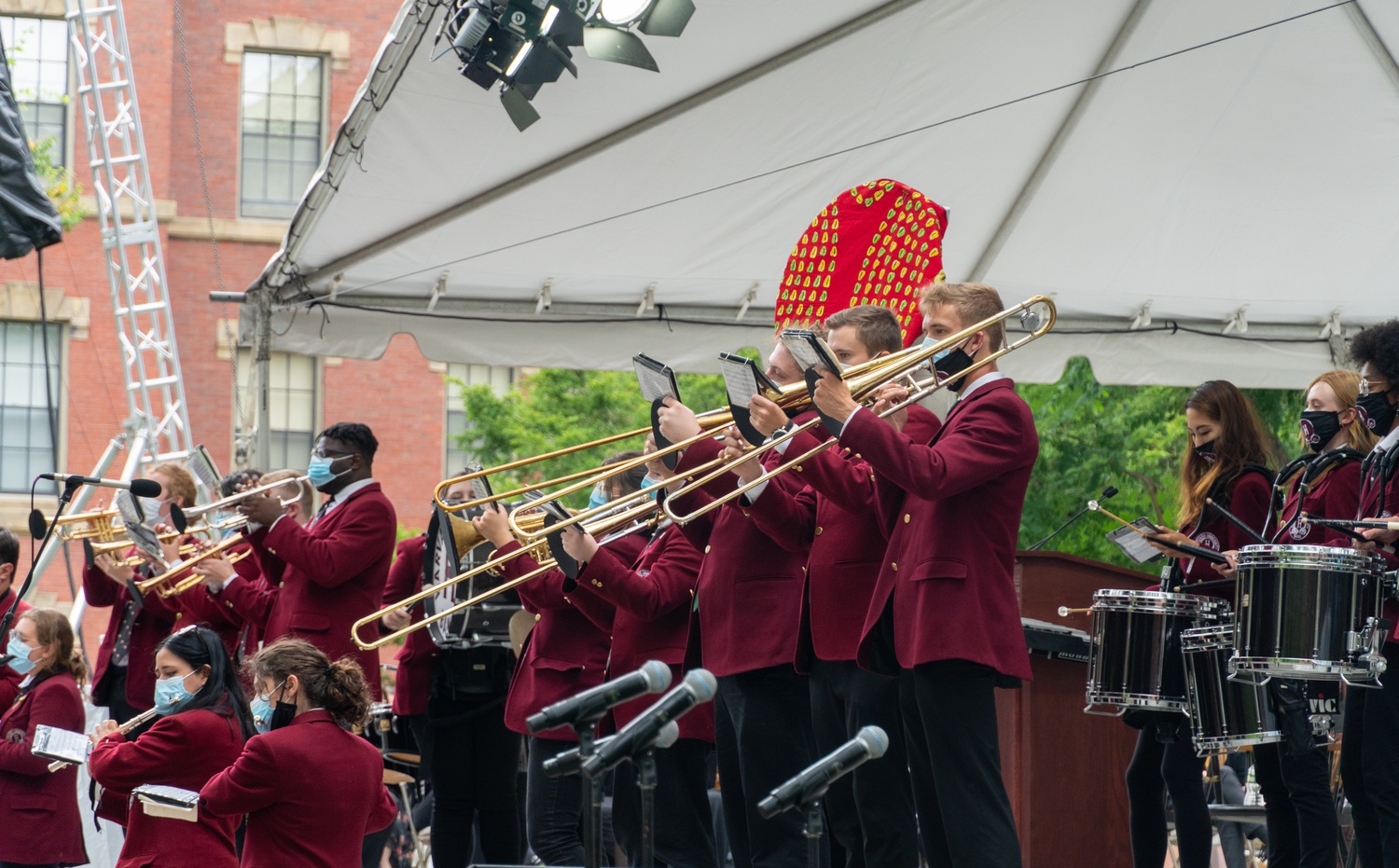 The Harvard University Band plays on the steps of Memorial Church in Tercentenary Theatre during Convocation on Aug. 31. By Zadoc I. N. Gee
By Audrey M. Apollon and Leah J. Teichholtz, Crimson Staff Writers

As this year’s freshmen and sophomores processed into Tercentenary Theatre for their convocations, they may have noticed something out of the ordinary: members of the Harvard University Band playing wind instruments through holes cut in their masks.

These accommodations are just one example of the ways in which this fall’s campus reopening has affected the performing arts scene at Harvard, causing groups to reimagine ways to safely perform and attract audiences who have not attended in-person student performances in 18 months.

Chloe A. Saracco ’21-’22, a leader of the vocal jazz ensemble Harvard VoxJazz, said virtual programming prevented members from being able to interact and rehearse with one another.

“The downside was definitely missing the live interaction, connection, rehearsals and constantly seeing each other in-person,” Saracco said. “Obviously, you can’t do a capella on Zoom.”

Despite not being able to perform in-person, Saracco said Zoom allowed for more “creative freedom” and flexibility.

“The upside was being able to put together a somewhat professional polished recording of two of our songs which is something that our group has never done in the past,” Saracco said. “We could kind of take our time to tweak things and make things as best as they could be.”

Still, the group is looking forward to building the club in the coming year.

“It was definitely a challenge to uphold and commemorate the club as it was a pandemic,” Saracco said.

Isabella E. Peña ’23-’24, a Crimson News editor and vice president of the Harvard Opportunes, wrote in an email that the a capella group continued some group bonding traditions virtually.

But a year ago, the Opportunes did not hold auditions, posting online that the online format “severely limited” the a capella experience. This year, the group resumed in-person auditions for new members.

“Even though we’re singing with masks, it’s so nice to actually be able to sing together at the same time and in the same place,” Peña wrote. “I’m so excited to welcome freshmen and sophomores into our little family!”

Jack Megan, director of the Office for the Arts at Harvard, wrote in an email that the organization is providing support — including guidance, staffing, and financing — to student groups to ease their transition to in-person performances.

“We help them think about how to do their art,” Megan wrote. “With brass players, to name one example, helping them find slotted masks and bell covers that enable them to rehearse with fellow musicians. With acting troupes, discussing staging accommodations while still trying to hold fast to their artistic ambitions.”

Many performing arts groups have been left in a “start-up phase” after going so long without in-person performances, Megan wrote. The Harvard Radcliffe Dramatic Club, for example, will not be producing on the main stage at Loeb Drama Center this fall because of the need for “reinvigorated” theater culture, he wrote.

“Many Harvard students, such as first- and second-years, have no memory of how vibrant the theater scene was and how theater gets done in the first place,” Megan wrote.

A previous version of this article misstated the status of Harvard Radcliffe Dramatic Club's activities this fall. They will be producing, but not on the main stage at Loeb Drama Center.