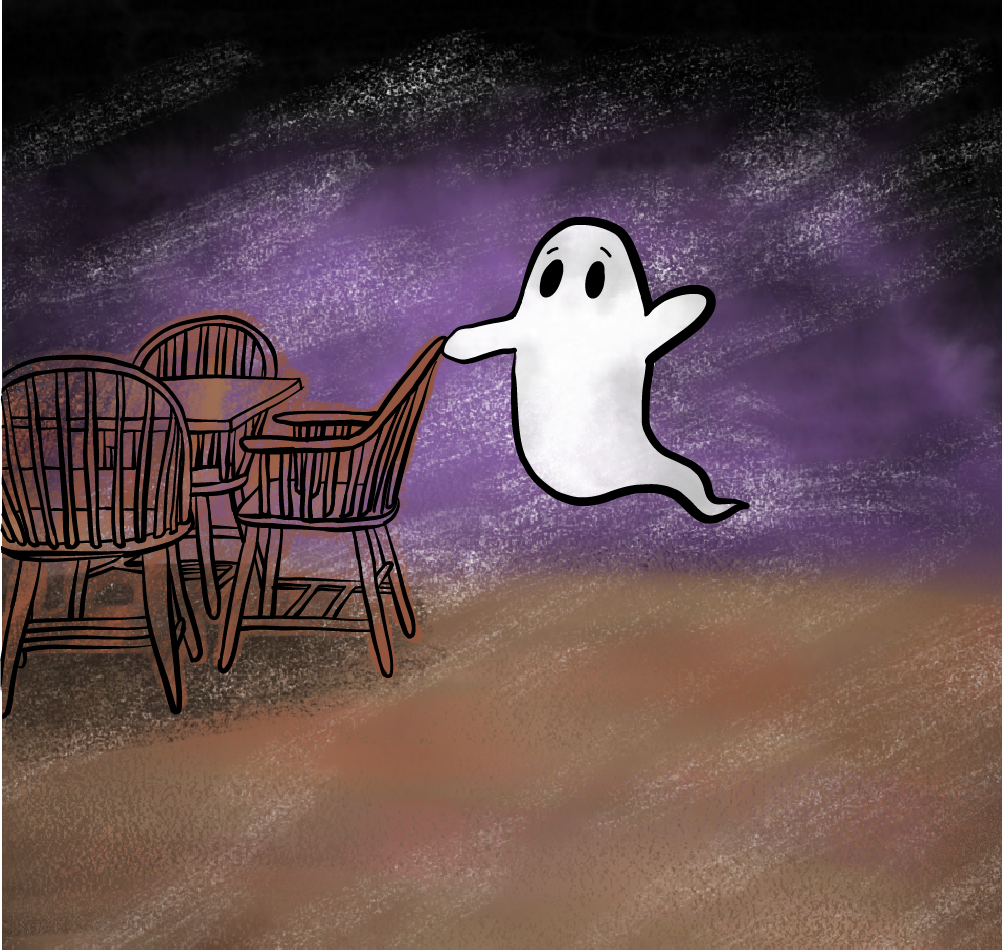 The Ghost of Cabot Past

The voice on the recording was frantic and hushed. “I don’t know how long I have. I’ve been seeing strange things. It's making me doubt my mind. I’m recording this so that maybe I can get proof.”
By Andy M. Wang and Jem K. Williams

It was an ungodly hour of the night — so late that not even a stray psetter would dare to stay awake for much longer — when I heard a knock on my door. For the last time, I thought, I’m not interested in punching The Fly. I opened the door anyway and found no one there except for a recording device laying on the ground. Great. Now, in addition to living in Cabot House, I have to deal with eavesdroppers.

It wasn’t recording when I picked it up. Thank goodness. I could continue in peaceful ignorance of whether or not I snore. I was awake now, and I figured that if someone was going to disturb my peace, I was going to disturb their privacy. So I peeled back the rubber flap on the side of the recorder and pulled out the SD card. “To my fellow Cabotian,” read a sticky note in cursive on the back of the device.

The voice on the recording was frantic and hushed. “I don’t know how long I have. I’ve been seeing strange things. It's making me doubt my mind. I’m recording this so that maybe I can get proof.”

This person was probably high, or had eaten too much HUDS pad thai, or both. Their voice cracks sounded like they’d been smoking stuff (cigarettes, of course) for a while — so vintage of them.

“She’s going to get me with the shovel,” the person croaked between hysterical sobs. I paused the recording. I don’t even think they have a shovel in Cabot. Hadn’t there been a poor girl asking for one on the email list earlier, trying to clean up a mess on the Quad Lawn? I was pretty sure no one responded, so the person in the recording was as good as safe.

I hit play again. “It all started with the Brain Break bandit,” the voice continued. “My roommate had sexiled me, so I was getting a drink in the dining hall, mostly zoned out until I heard a SLAM! like someone was struggling with something heavy. When I turned to look, a figure in white was standing rigidly in the servery door.

“Cabot House Faculty Dean Ian J. Miller sent out an email about a figure in white roaming the dhall earlier in the week, and my roommate asked me if I’d heard anything about it. I said no, but now I wish I had given the wild story more credence.

“The white figure was tall. Her long hair and theater-worthy Victorian white dress that read ‘Hollis Will Change Your Life’ were incredibly worn out. She radiated a piercing coldness that touched my bones. Beneath Cabot dhall’s beautiful phantom chandeliers — the harsh lighting of retirement chic — she cast not a shadow.”

Hearing this, I couldn’t help but think that this poor kid had seen something truly terrifying — scarier than midterm grades. I didn’t expect much from HUDS, but I’d never gotten a ghost with my chicken parm. I kept listening.

“The ghost and I stared awkwardly at each other in front of the soda machine, me clutching my cup of Powerade and the figure brandishing her shovel. I couldn’t see her face until she looked up and whispered, ‘Hi.’ Was she trying to be friendly? I forced a smile and muttered, ‘Have a good night’ before hurrying back to my suite. But the figure has been haunting me since. The next day, I got a note slipped through my door...”

I heard paper uncrumpling as the voice began to read out the note:

“In memoriam: Margaret Coleman Waites. Scholar, teacher, friend. Her death on March 15 has brought deep sorrow to a host of friends.” I recognized that name. “From the beginning of her college course she showed a mind of unusual penetration and firmness of grasp ...”

I heard metal scraping in the background, as the person in the recording erupted into frantic breaths. Suddenly, the tape cut out.

The shovel. I knew it. On Thursday at 1:47 a.m., I received an email from Margaret about her success in her “unusual penetration” from the ground. I connected the dots. The request for a shovel I saw earlier was from Margaret. She must have gotten her “firm grasp” on one. It must have been her coffin that was the “mess on the Quad Lawn” mentioned in her email.

How could she have dug herself up in plain sight of so many windows? Luckily, I was able to connect with Jerry A. Trik, a local elder who “frequents the Quad Lawn at night time” (“not suspiciously,” he gladly added), who verified that something was unusual that night. “It was very cold,” he said. “You young climate activists couldn’t explain this one.”

Hot on this cold trail, I recalled whispers around the house that Margaret was scheduled to make an appearance at Cabot Café that night. I showed up, anxiously clutching my Board Plus pumpkin spice latte amidst a crowd of people all waiting for her to make an appearance. My anticipation had almost boiled over when we heard from the staff of Cabot Café that a black rose had been spotted at the Café’s entrance. At 9 p.m., the music stopped, and all eyes were on the door — but Margaret didn’t show up. A barely audible “see you tomorrow” crackled from the hacked speaker, and the hubbub of the Café resumed.

Although Margaret ghosted us that evening, it was anything but a conclusion. Her memory has always lingered in Cabot’s halls. Now that she has successfully returned from the underworld, the rest of her will, too.