'Not Out of the Woods Yet': Cambridge Looks to the Future of Pandemic Post-Omicron Peak 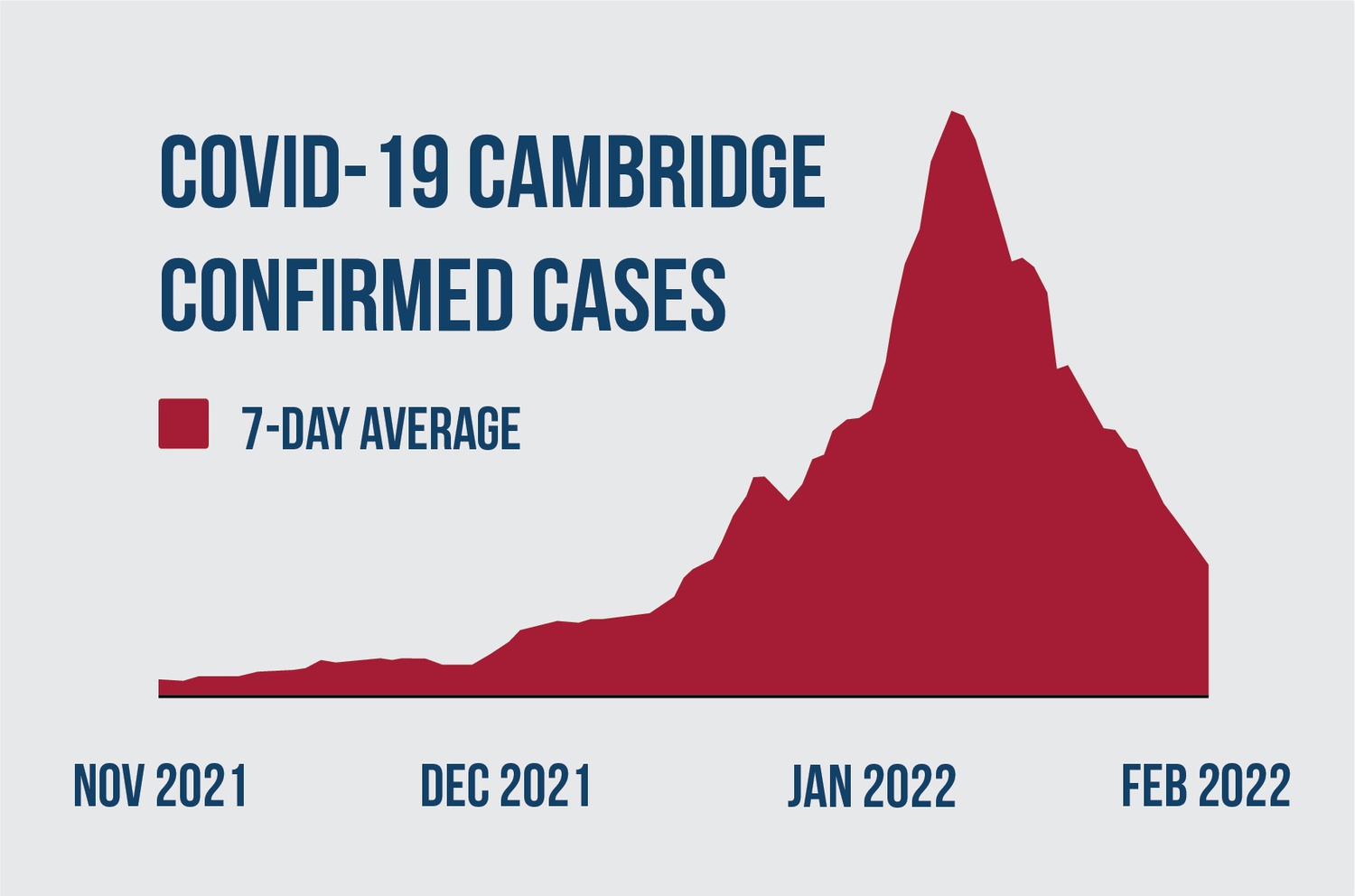 Cambridge reached its peak number of Omicron cases on Jan. 5 and has since seen a decline, according to the city's public health department. By Toby R. Ma
By Katerina V. Corr, Crimson Staff Writer

The Cambridge Public Health Department released findings on Wednesday reporting that the peak of Omicron cases in Cambridge passed on Jan. 5, though Derrick L. Neal, CPHD director, reminded residents that they are “not out of the woods yet.”

“If you look at the case trends for Harvard and MIT since early December, you’ll see that university trends followed a similar pattern as Cambridge and the state, with the peak of Harvard and MIT infections occurring in early January,” the CPHD wrote in an emailed statement.

Amid the nationwide spread of the Omicron variant in December, the Centers for Disease Control and Prevention updated its guidance to state that following a positive Covid-19 test result, individuals should observe a five-day isolation period — a departure from its previous recommendation of ten days — and may leave isolation if symptoms resolve by day five.

Cambridge’s guidance includes a strong emphasis on testing during and beyond this isolation period.

“The Cambridge Public Health Department strongly recommends antigen testing on day 6 of the isolation period because people with COVID-19 can be infectious after day 5, even if they are feeling better,” CHPD wrote in its email.

“At this point in the COVID-19 pandemic, it is more important that people have easy access to testing through home test kits than it is to count every case,” the statement continues.

Last month, the city also announced strengthened indoor masking guidelines and a temporary shift to remote meetings for all public city meetings, excluding those of the City Council and its committees.

During a Jan. 24 City Council meeting, Neal, who serves as the city's chief public health officer, provided updates on the state of the pandemic in Cambridge.

“The level of infection is still great with the drop that we're anticipating and that we’re witnessing at this time,” Neal said.

“Cases are still higher than they were in any other previous surge that we’ve had in Cambridge,” Neal added. “Our analogy that we use in the office today is literally like going 150 miles an hour to around 100 miles an hour.”

During the update, Neal emphasized that the future of Covid-19 in Cambridge – as well as throughout the country – was shifting from a pandemic response to an endemic one.

“The phrase ‘pandemic to endemic’ is an acknowledgment that we can’t defeat Covid, rather Covid will become an endemic disease,” he said. “This means that it will be with us indefinitely.”

During the meeting, Anna Kaplan, CPHD’s director of epidemiology and data services, said she expects it to take “several weeks” before the city experiences a level of transmission that the CDC defines as “substantial,” rather than its current level of “high.”

“I’d like to see us, from an epidemiology perspective, firmly in the moderate or low category – honestly probably in the low category, given the density of our city – before we can feel a little more like we’re in that endemic versus pandemic area,” she added.

Councilors responded to Neal’s presentation with both hope and apprehension about the uncertain future of Covid-19.

“I’m happy to see that you added some more testing availability and that the hour-long lines are not happening anymore,” Councilor Mark C. McGovern said during the meeting. “My fear is that there will be at some point again.”

McGovern filed a policy order on Jan. 10 – which was unanimously adopted by the Council – calling upon the city manager and other city departments to develop a report on how to increase testing availability for Cambridge residents.

Neal wrote in the CPHD’s emailed statement that he acknowledges the city’s keenness to return to business as usual.

“We have been living with COVID-19 for over two years, and it has been a tumultuous, stressful time. Pandemic fatigue is real. College students want a return to normalcy—we all do,” he wrote. “While we can’t change the fact that the virus is still spreading in the community and infection rates are still high, we can make a mental shift in our thinking.”

“We can acknowledge that the situation is improving,” he added. “Meanwhile, students should keep taking actions that keep them from getting the virus and spreading it to others, which includes vaccination and wearing high-quality masks indoors.”