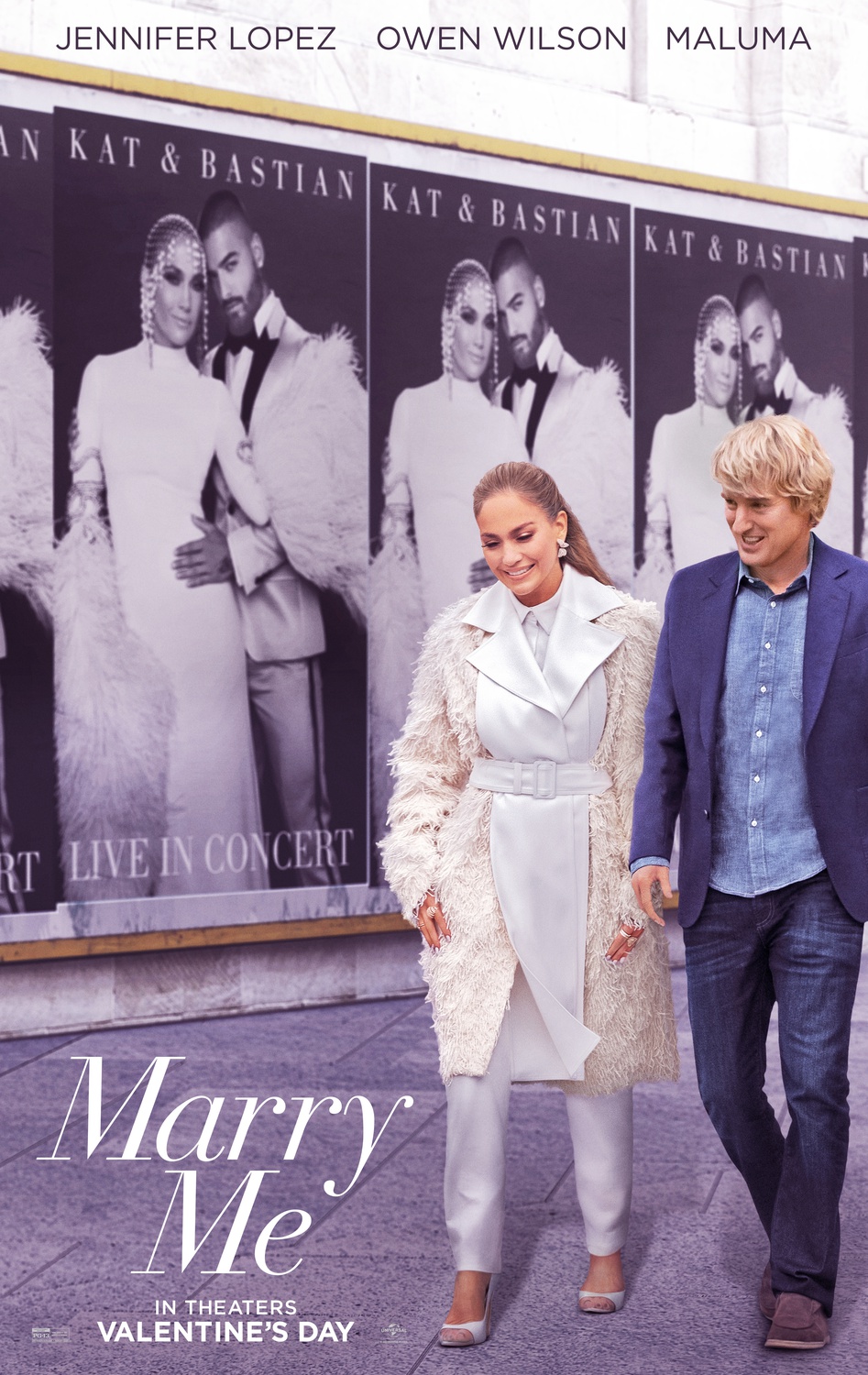 Ever wonder what it’s like to be a celebrity? Give Jennifer Lopez and Owen Wilson two hours, and they’ll tell you in no uncertain terms — give or take a few musical numbers. Kat Coiro’s new romantic comedy “Marry Me” emphasizes the burdens of public attention and glosses over its benefits in an unoriginal glimpse into the lives of the rich and famous.

When the audience of “Marry Me” meets pop sensation Kat Valdez (Jennifer Lopez) — whose life bears a striking resemblance to the actress who portrays her — she is lounging on a chaise as an army of aides buzz around her pristine, Peloton commercial-esque apartment. They are preparing for Kat’s upcoming wedding to fellow star Bastian (Maluma), an onstage event that will be televised to an audience of over 20 million fans and oh-so-conveniently coincides with a performance of their new collaborative project, despite Kat’s insistence that she wants the ceremony to be about “just the two of them.”

Charlie Gilbert (Owen Wilson) is introduced as the quaint antithesis to Kat’s life of luxury and superficiality, poised to rescue her from sycophants and a slimy fiancé. A single father to Lou (Chloe Coleman) and math teacher at the local middle school, Charlie stumbles into Kat’s concert/wedding in an attempt to win back his daughter’s admiration and prove once and for all that he is “cool.” Apparently, this includes accepting Kat’s impromptu proposal after she discovers Bastian’s infidelity and inexplicably fishes into the audience for a replacement groom. Luckily or unluckily, the two marry and embark on an emotionally hollow romance: performing for the paparazzi for the first few weeks, then developing real feelings, though the audience can hardly tell the difference.

In many ways, “Marry Me” seems like a desperate attempt to humanize celebrities to the public at large. Undoubtedly, there are moments of emotional poignancy: Kat’s mortification at discovering Bastian’s infidelity is worsened by video evidence widely circulated on the internet, and the bleak image of Kat crying on the floor of her apartment with only her manager to comfort her is certainly memorable. However, Lopez’s performance fails to deliver an emotional punch at these critical moments, and sympathy has its limits for characters who pick Coach handbags like apples from a tree and cannot complete basic tasks without their assistants’ help.

Lopez shines most in her moments on stage — which are numerous, stretching the film to a hefty run time of nearly two hours despite its threadbare screenplay — reminding the audience exactly why Jennifer Lopez is a beloved multi-hyphenate also known simply as “J. Lo.” Surrounded by gauze, sparkling lights, and occasionally a troupe of dancing nuns, Lopez is mesmerizing. But perhaps this flawless showmanship is exactly what prevents “Marry Me” from achieving emotional resonance. The line where Jennifer Lopez ends and Kat Valdez begins is blurry at best, and as such, the screenplay tiptoes around making Kat a fallible, human character and instead makes her a polished reflection of Lopez’s public persona. The film emphasizes her charitable endeavors and humble beginnings, and Kat Valdez remains as distant from the audience of “Marry Me” as she does from her concertgoers in the film.

Where is Charlie Gilbert during most of the action? Either standing in a corner, mesmerized by his “wife” as she records Instagram sponsorships and hit songs, or acting as the willing partner in yet another romantic montage (there are many). Wilson adequately completes his role as the charming rustic to Lopez’s high achiever, proudly declaring that he has neither social media nor a smartphone — totally unbelievable in the year 2022 — and encouraging Kat to step away from her regimented schedule and draining media responsibilities. What does Charlie get in return? The pleasure of Kat’s company, it is assumed, though the pair’s interactions largely consist of flirtatious gibes and incessant references to just how different their lives are.

Perhaps the greatest failing of “Marry Me” is in establishing Kat and Charlie as two people who actually love each other: Wilson and Lopez lack chemistry, and the heavy lifting of romance is left to more cinematographic elements. If anything, “Marry Me” is successful in its depiction of modern-day fame. Cameras relentlessly swarm the two lovers, their Instagram followers know important details about their lives before they do, and their relationships are founded on more than just mutual attraction. Certainly, megastars will find the story relatable, but “Marry Me” has little to offer to a broader audience besides a handful of catchy songs.