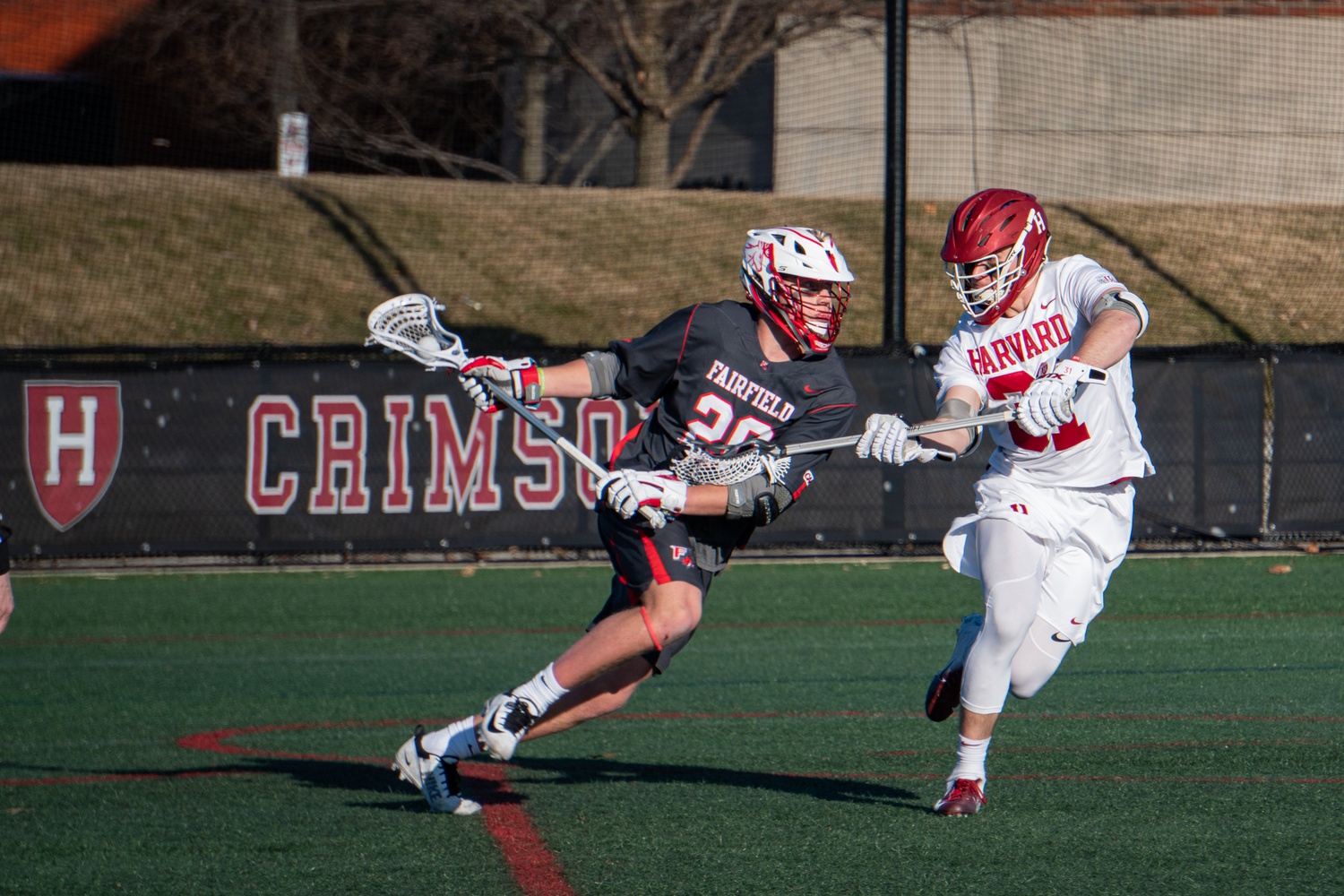 Harvard men's lacrosse took on Fairfield on March 7, 2020, in its last game, which resulted in a 15-12 victory. A year and 363 days later, the Crimson nearly replicated that result, winning 16-12. By Brendan J. Chapuis
By Katharine Forst, Crimson Staff Writer

Fairfield, CONN.––With an around the world shot sunk by senior attacker Austin Madronic propelling the Crimson to a 10-5 lead at the conclusion of the first half, Harvard took care of Fairfield 16-12 on the Stags’ home turf.

The Crimson played a cohesive game against Fairfield on Saturday, March 5. On both ends of the field, the team played unselfishly, sharing the ball and working together.

The defense had a little bit of trouble seeing the skip passes, and was late to rotate through its slide packages to the second adjacent. This left Fairfield players open both on the wings and on the doorstep. However, the team’s play picked up significantly by the end of the first quarter, and the defense began communicating much better. It started shutting down the cross-fan passes and forced outside shots that senior goalie Kyle Mullin easily tracked down.

“We picked up the energy. We guarded a little bit better in the second half which makes everything easier off ball. We really emphasized it because we got burned on it a little bit in the first half” he said.

Despite the victory, Harvard struggled with its clearing. The team had trouble getting the ball out of its defensive end for much of the first half. After the break, though, it began performing much better when it was patient with its clears. This patience was rewarded with a big goal by Martinson, who cleared the ball up-field for an open take, and goal.

“It’s about working together and continuing to learn from our mistakes… They hit us with the ten man ride a little bit, but I think once we settled down and had more composure we were able to figure it out and clear the ball better,” Bergstrom noted.

The Crimson looked particularly strong on the offensive end, with first-year middie Miles Botkiss notching five goals, and Madronic adding five of his own. Botkiss said that the team’s play was cohesive because they focused on dishing the ball whenever possible. Of the team’s 16 goals, 9 were assisted; the offense had great vision from all over the field.

“We focused on ourselves, we moved the ball for each other, and played together. That’s why a lot of our goals were assisted. We just played offense together,” Botkiss said.

Middies like junior Isaiah Dawson and first-year Andrew Perry had successful takes from up top. Perry scored on a low to high pass from behind thrown by first-year attacker Sam King, driving the ball home on a massive step-down shot. Dawson took it himself with a shifty move down the right alley.

“Today, more so than last week, we calmed down and played patiently. We moved the ball, it was very unselfish. We’ve been playing well all week, and so we used what we learned in practice and on the field,” King noted.

The Crimson will look to continue its momentum against Michigan on Saturday, March 12, when it will play the Wolverines in Ann Arbor at 4 p.m.