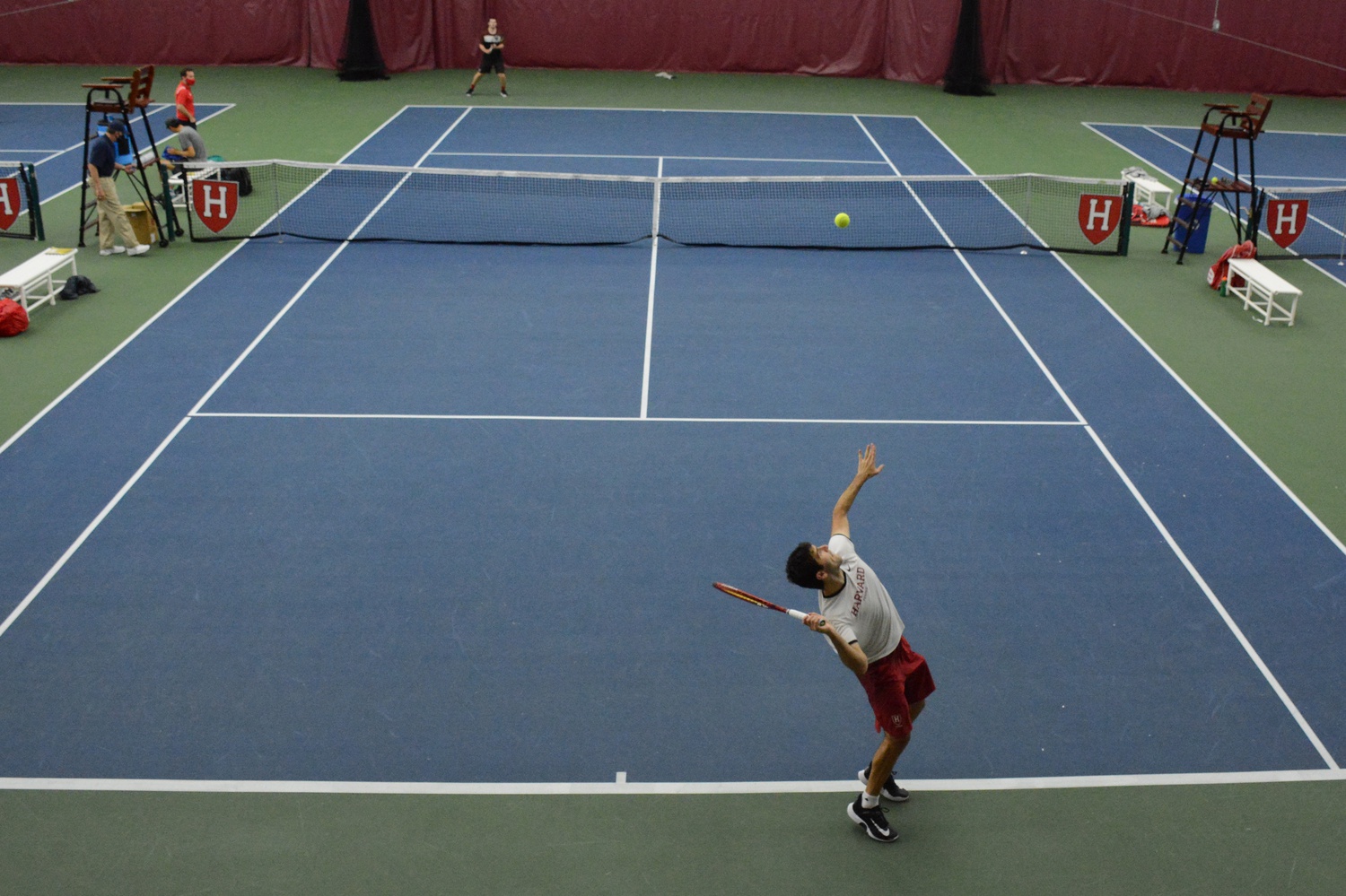 Harvard played in the Crimson Halloween Invite from Oct. 29-31 in Cambridge, M.A. This past weekend, the men's and women's teams took on Columbia and Cornell. By Owen A. Berger
By David Aley and Caroline Gage

“One thing that our team has really come a long way in this semester is with our confidence and belief in ourselves,” said first-year Holly Fischer. “So I think that even though we were down, everyone who was playing was fighting so hard and really leaving everything out on the court.”

The Harvard women’s and men’s tennis teams had grueling weekends against Ivy League opponents Columbia and Cornell, with the men on the road in New York and the women holding down home court in Cambridge. After long, hard-fought matches from both squads on Saturday and Sunday, the Crimson women and men walked away with two more victories each, well-poised for a strong end to regular season competitions.

On Saturday, Harvard (12-7, 3-0 Ivy League) set the tone for a successful weekend with a decisive 4-1 victory over No. 56 Columbia at the Murr Center in Cambridge, M.A., securing the Crimson’s fifth consecutive victory.

“Going into this weekend our team was focused and we were definitely all super motivated,” Fischer said. “We knew these would be two tough matches coming up.”

The preparation paid off instantly, as Harvard got off to a scorching start in doubles play, with the duo of first-year Angel You and sophomore Iveta Daujotaite finishing first with a 7-5 victory, followed by Fischer and first-year Maxi Duncan securing the point with a 6-4 victory.

“I really like playing with [Duncan] and I think our games compliment each other really well,” Fischer said. “We both like to play very aggressively so we had a clear idea of how we wanted to play against Columbia and what we wanted to do on the court.”

The Crimson found continued success against the Lions in singles play, with You and sophomore Sany Gawande taking down their Columbia opponents by scores of 6-0, 6-0, and 6-2, 6-2, respectively. On the fourth court, junior Mihaela Marculescu was defeated in straight sets, 6-2, 6-2, tightening up the match, leaving it up to Fischer, Duncan, and junior Sophia Ho to finish it off. After a 6-4 victory in the first set, Fischer was challenged in the second set, bringing the set to a score of 6-5 before the final few serves. Eventually, Fischer broke through and secured a 7-5 win, clinching the match for Harvard.

“Everyone on our team was really fighting for every point because we knew that the matches could go either way,” said Fischer. “After the final point I think we all kind of breathed a sigh of relief because the whole day was very intense.”

The Crimson saw continued success on Sunday against Cornell, finishing the day against the Big Red with their sixth consecutive victory by a 4-2 margin. Fischer and Duncan carried their momentum from the day before in doubles play with a dominating 6-0 performance against a duo from Columbia. Senior Rachel Lim and Marculescu followed up with a similarly convincing 6-2 win to capture the doubles point, once again putting the team up early.

In singles play, Harvard found themselves in a bit more trouble. Gawande secured a victory on the sixth court, 6-3, 6-2, but Ho and Fischer dropped their games by scores of 6-2, 6-0, and 6-2, 6-1, respectively. Fischer noted that despite these losses that tied up the match at 2-2, the Crimson women have learned over the course of the season to stay resilient and stick together until the end.

“Cornell is definitely a tricky team, and I think that even though the conditions were tough yesterday everyone was doing what they could do to find a way to get through their match which I think was ultimately reflected in the team’s win,” said Fischer.

Duncan followed Fischer’s tough defeat with a huge 6-2, 6-1 win on the second court, leaving first-year Rachel Arbitman and senior Rachel Eason to secure the win. Arbitman went the distance in a tense 7-6(7-1) first set, but came out firing in the second set with a statement 6-0 performance to clinch the match.

No. 16 Harvard started off the weekend with a decisive 4-1 win against No. 23 Columbia, their second win in the Ivy League this spring. This also marks the Crimson’s second victory over the Lions this season.

Senior captain Brian Shi recognized the importance of this win for the team.

“It’s always tough going up against Columbia, they’re such a great team,” he said. “In the past few years they’ve pretty much been our biggest rival, and the team to beat in the Ivy League.”

Harvard took the doubles point by securing wins in the top two matches. Shi and first-year Daniel Milavsky took on Columbia’s Theo Winegar and Max Westphal on Court 1, eventually winning the set 6-1. Meanwhile, sophomore Ronan Jachuck and junior Harris Walker fought Alex Kotzen and Henry Ruger of the Lions in a close 7-5 set. Both duos struggled to get the necessary break, going back and forth to the very end.

“It came down to just a couple of points at the end to get one break at 6-5 to close out the set and clinch the doubles point,” Jachuck explained. “We executed really well, and committed to playing our aggressive tennis.”

Singles play was similarly successful for the Crimson, with three straight-set victories. Walker defeated Max Westphal 6-2, 6-3 on Court 3, while Jachuck secured a 6-3, 6-4 win over Austen Huang. Shi fought to a tie-break in his first set, but came back with a vengeance in the second to win 7-6 (6), 6-0.

A combination of momentum from the first set and support from his teammates helped Shi maintain his lead. “I saw my team getting hyped and I used that to get over the finish line,” Shi recalled.

Following their win at Columbia, Harvard was back on the road to face Cornell. In a slightly closer matchup, the Crimson emerged victorious at 4-2, continuing their 3-0 Ivy League winning streak and bringing their record for the season to 13-4.

Once again, Harvard took the lead over their opponent in doubles, clinching the doubles point. Jachuck and Walker had an effective match on court two against Cornell’s Adit Sinha and Nathan Mao, serving out the set for a 6-3 win. On the third court, sophomore Henry von der Schulenburg and junior Steven Sun got a break and took the set 6-4 against Radu Papoe and Pietro Rimondini.

“[Walker] and I always want to play our matches on our terms,” Jachuck said. “We got an early break, and gave the break back, but we did feel that we were the ones making the plays.”

Singles play proved challenging, with the top half of Cornell’s lineup coming out swinging. Shi fell to Vladislav Melnic in straight sets, 4-6, 4-6, marking the end of his 13-match winning streak. Despite the loss, Shi wasn’t discouraged.

“I didn’t play as good of a level as I hoped I would and I know I can, but I’m not too upset about the match, because as a team we were able to come out with the win,” he shared.

Although Harvard lost in the top two matches, number three seed Walker defeated Cornell’s Radu Papoe 6-2, 7-6 (3), and Jachuck quickly beat Evan Bynoe 6-0, 6-1 in the fourth spot. This win over the Big Red leads the Crimson into the next phase of Ivy League competition as Harvard faces off against Princeton and Penn at home next weekend.

-Staff writer David Aley can be reached at david.aley@thecrimson.com.