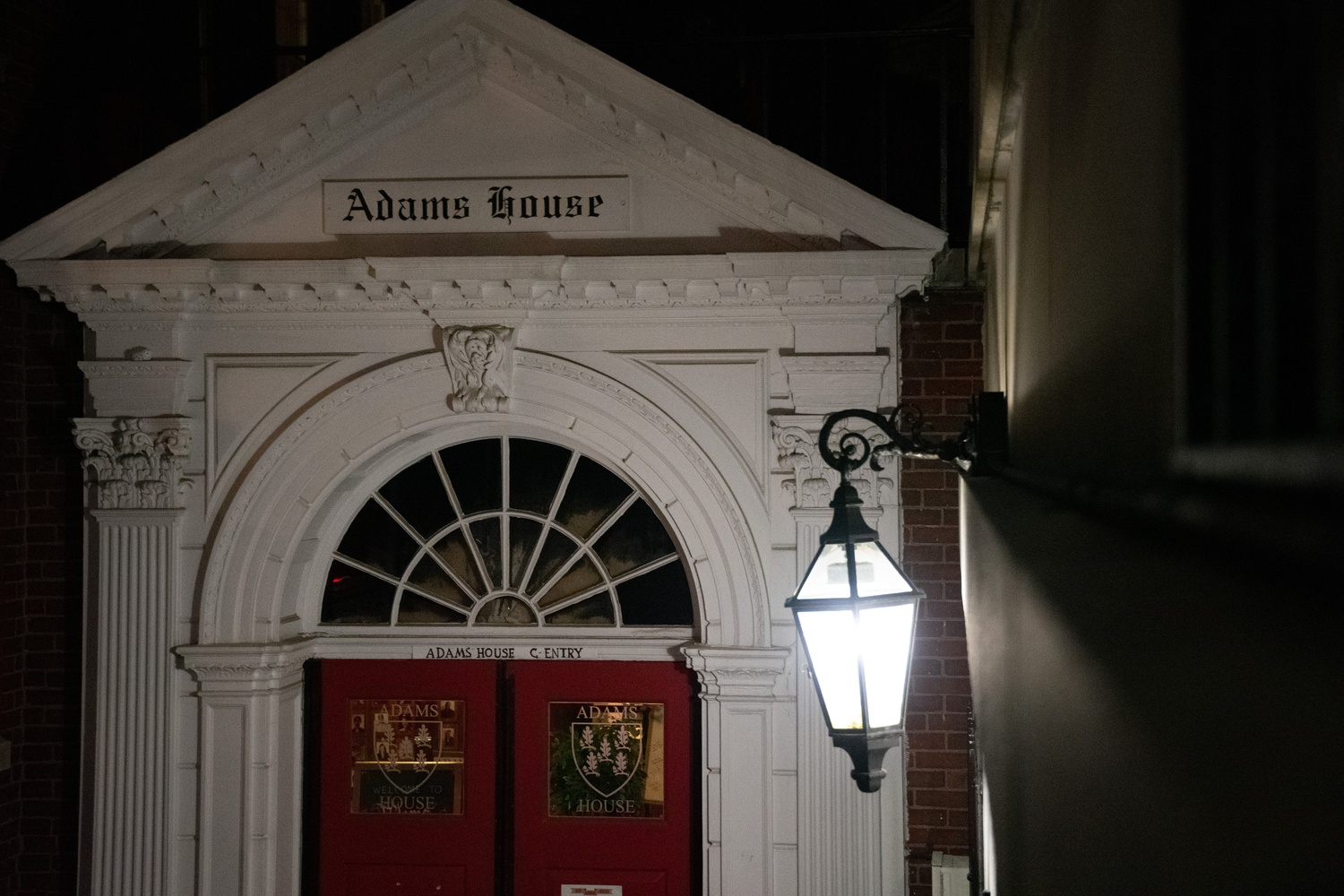 The entrance to Adams House, pictured at night. A few supernaturally-inclined residents have recently started the Adams Seance Society, dedicated to communicating with the spirits that may lurk in the House's walls. By Julian J. Giordano
Advertisement
Advertisement

A voice pierces the silence, inquiring if there are spirits there with them. They wait with eager ears. Suddenly, it comes — a tap on the walls — faint and indistinct, but enough to send the room into an uproar.
By Elyse D. Pham and Jem K. Williams

The Adams Seance Society goes by the acronym “ASS” — a name that “lends itself to a lot of fun,” says Vice President Charlotte R. Moses ’24. In spite of the club’s eerie subject matter, it’s often difficult to talk about ASS with a straight face. The puns are irresistible. A seance that failed to summon any spirits but cultivated a sense of community was an exercise in “building ASS up,” says Moses. Its members are called “ASScheeks.” Moses entered the society as a total skeptic and admits to “doing it for the meme.”

President Palis “Fresh” Pisuttisarun ’24, on the other hand, has always been an effusive and unrelenting spreader of the ASS gospel. They periodically stop our conversation to make their rounds of the Adams dining hall, trying to convince strangers to attend the upcoming seance. Of course, they don't think of themself as a naive believer. “You have to be discerning,” they say, legs bouncing under the table. “I think the thing about ASS that’s so interesting is that we’re always balancing that fine line between skepticism and an openness to the unknown.”

“Everything is silly, and that’s great,” says Moses, the calm counterpart to Pisuttisarun’s boundless energy. “But who thought we would ever actually have another seance? To be honest, I never thought we’d ever make contact with anyone. And I kind of think we might have heard a tap.”

By a tap, Moses means a disembodied, otherworldly tap — the tap of a Harvard spirit communicating through a ghostly portal and reaching the halls of Adams House. One tap for “yes,” two taps for “no.” At their first seance, the members didn’t hear taps for every question they asked, and sometimes the taps were easily attributable to the usual creaks and shudders of an old wooden building. But several of the taps were “loud and clear,” Pisuttisarun says.

As the acronym might betray, ASS began as a lighthearted joke between friends. The founding members, including Moses and Pisuttisarun, met last semester on the fifth floor of Fairfax Hall, where they each live with a different blocking group. As they grew closer, they developed a tradition of Sunday “circle time,” Pisuttisarun says.

“We would just sit around in a circle and talk, play games, stuff like that,” they say. “And then one day, I said, ‘Wow, the way we’re sitting in a circle, it feels just like we’re having a seance!’”

Of course, no one thought anything of it — there was no way that Pisuttisarun would seriously want to hold a seance, Moses says, recalling her thinking at the time. But a month-and-a-half later, her phone lit up with a surprise summons to a Tuesday seance. Pisuttisarun wasn’t joking after all.

They’d done some research into the mechanics of summoning spirits, because “it’s not everyday knowledge,” they say. In addition to finding spells and chants, they also looked into the stories of people who have died at Harvard — according to Pisuttisarin, spirits remain stuck wherever they die.

“We take safety very seriously at ASS,” Pisuttisarun explains. “We definitely don’t want to upset people, and we don’t want to summon any evil spirits, since that’s dangerous, of course. It can possess you and it can lead to anything ranging from paranoia to shock to death.”

With that cheerful disclaimer aside, the club has recently opened its spiritual gatherings to the entire Harvard community — or, as Pisuttisarun puts it, “getting ASS off the ground.”

At their inaugural open seance, Pisuttisarun pushes the door open, allowing its creak to ring out to the attentive audience, revealing the Adams House music room. The only light in the room flows from two windows, each marked at the top with a shield of patchwork stained glass. On the far wall stands a piano, half-covering the red brick which seals an imposing fireplace with the Veritas crest carved into its mantle. 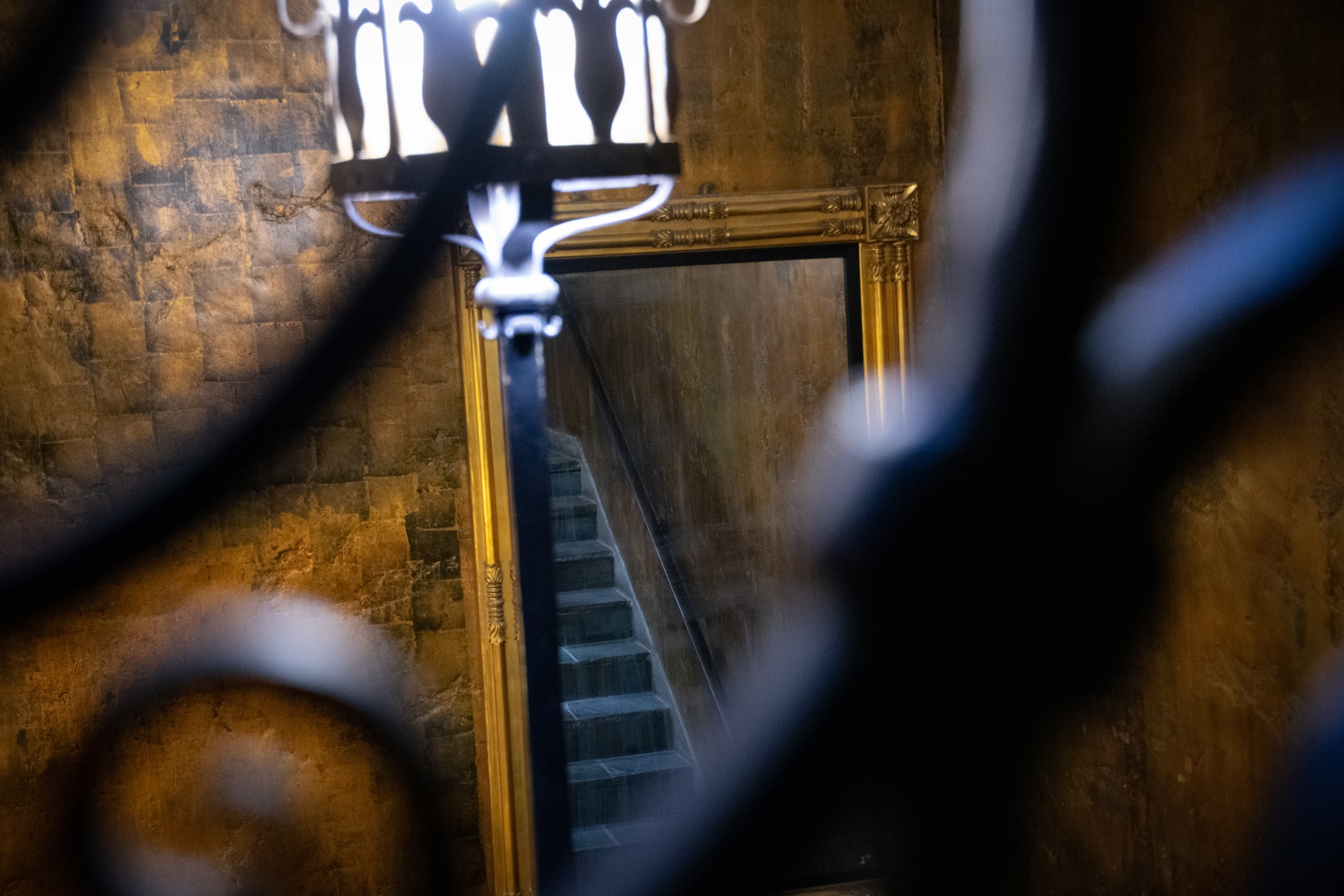 At the Adams Seance Society's first seance, the members posed questions to potential spirits, listening for taps as answers. According to the society's president, several of the taps were “loud and clear." By Julian J. Giordano

The group crams into the space and sits down in a circle, cross-legged on the cracked marble floors. Facial features merge with darkness, but voices cut through clear as day as one by one, they introduce themselves. They each answer an ice breaker — What were you in a past life? — with answers ranging from “a tree” to “a Victorian boy.” Food offerings, most of them stolen from Adams Brain Break, are arranged in the center, encircled by battery-operated flickering candles.

At Pisuttisarun’s cue, neighbors join hands as they detail the Seance Society’s practices. When they begin speaking of malevolent spirits, their demeanor changes. In a solemn voice, they warn that if anyone feels a malevolent presence, they should break the circle of hands to dissipate it.[

One member of the circle, after tossing in a bag of jelly beans, begins the chant:: “To all the ones that came before, knock upon the spiritual door.” Everyone closes their eyes, and the group repeats the incantation three times in unison. A heavy silence follows as each member prepares questions for the spirits.

A voice pierces the silence, inquiring if there are spirits there with them. They wait with eager ears. Suddenly, it comes — a tap on the walls — faint and indistinct, but enough to send the room into an uproar.

After a small period of silence, someone asks if the spirit had ever been in love. From somewhere within the walls, the sound of two taps rings through the room.

— Magazine writer Elyse D. Pham can be reached at elyse.pham@thecrimson.com.