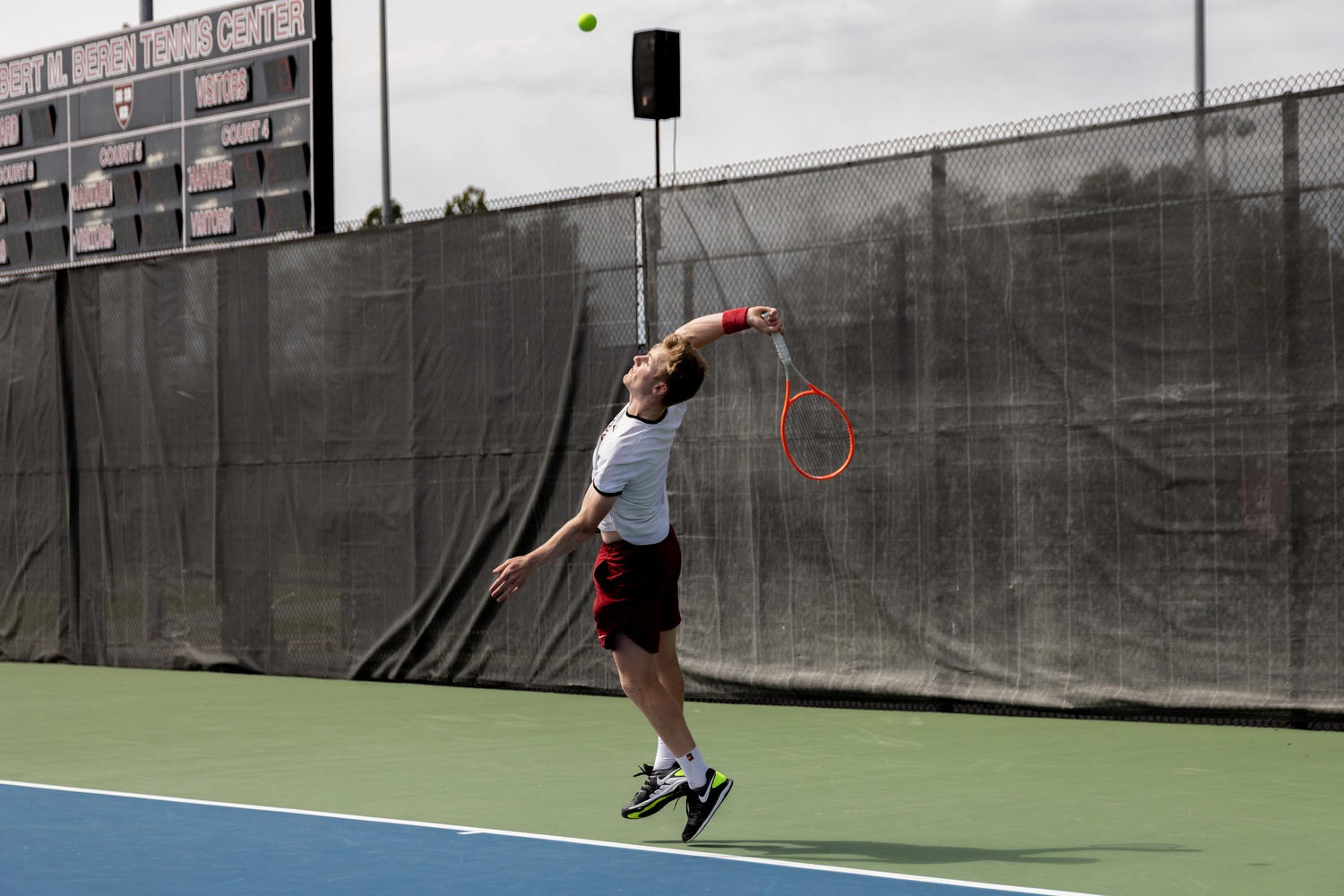 Harvard men's tennis faced off against Princeton on April 16, 2022. This past weekend, they won the Ivy League Championship in Cambridge, M.A. By Dylan J. Goodman
By Caroline Gage

No. 14 Harvard secured its 30th Ivy League title in an impressive 4-0 victory over Yale on Sunday, Apr. 24. The sweep concluded the Crimson’s undefeated conference record for the season and marks their first outright win since 2008.

“We came out and played really good tennis, and I’m really, really proud of what we’ve been able to achieve,” said senior captain Brian Shi, who played in the #2 position.

Doubles proved to be a deciding factor in the match, with Harvard winning two of three matches in tiebreakers to get the doubles point. At one point, Yale was leading on all three courts, but after seeing the loss on Court 2, the Crimson dug deeper to get the win. The duo of Shi and Milavsky on Court 1 defeated Cody Lin and Renaud Lefevre, 7-6 (7-4), taking it all the way to a tiebreaker. Two courts down, Steven Sun and Henry von der Schulenburg secured a similarly thrilling win over Michael Sun and Luke Neal, 7-6 (7-3).

“We [Shi and Milavsky] were also down early, but I knew once we got one break back the momentum was gonna be on our side,” Shi recalled after the match. “When a crowd is out there I think it’s really kind of impossible to not bring the energy, so honestly I think [the crowd’s energy] really kept us in the doubles match.”

Doubles strategy has been a focus of the coaching team throughout the season, and seeing as the Crimson took the doubles point in every conference match, the tactics are working. The Scott Mead ‘77 Head Coach for men’s tennis, Andrew Rueb ’95, has worked extensively with the team on doubles plays throughout the season.

“A point margin going into singles seems small, but it’s actually a big advantage, and I think that also puts a lot of pressure on Yale to be perfect,” Rueb explained.

The pressure worked: Yale was unable to win a single match against Harvard in singles play. Ronan Jachuck made quick work of his match on court 4, beating Aidan Reilly 6-0, 6-2. Next to finish was Steven Sun, whose competition against Walker Oberg resulted in a similarly decisive 6-2, 6-1 win.

“It takes a lot to win four singles matches against us,” Coach Rueb said. “It’s not only a talented team, but it’s also a really gritty team, and that’s what’s been separating this year from some others.”

After the victories on Courts 4 and 5, the Crimson found itself up 3-0 in the competition, needing just one more point to close it out. It all came down to Shi.

“In the back of my mind I was thinking ‘Oh wow, this may come down to me,’” Shi recounted. “Honestly I think in that moment I had a bit of nervous energy, but I tried to keep it one point at a time and just take my time, not get too excited and ahead of myself.”

Shi clinched the final match of the competition, which was also the team’s Senior Day. Shi easily kept his cool to win the final point necessary for the Ivy League title with a perfect 6-4, 6-0 win against Michael Sun. The victory closed out the regular season and highlighted the senior captain’s talents on the court.

“It was only fitting on senior day that Brian should be the one that clinches and gets us over the finish line,” Coach Rueb reflected after the match. “We will so miss Brian and his leadership and his warmth, and just watching him play.”

This sentiment is certainly echoed by the rest of the team, as evidenced by their support for Shi as he finished up the match. It was an emotional moment for the team, especially for Shi.

“It felt great to see all the guys right next to me, especially on that last point. They were standing there, hands over each others’ shoulders; to me it was a really special moment,” the senior captain said. “As soon as we won that point, all of the emotions came out from the entire season.”

While the regular season has ended, there is still work to be done: Harvard will now move on to the NCAA tournament. Because of their positioning in the top 16, they will host the first two rounds of the competition at home.

“Now we have a full week, 10 days or more, before our first NCAA match, so there’s some time there for us to rebound and make a push for this last half of the season here,” Coach Rueb said.

The NCAA Championships will take place from May 19-28. Regional championships, which the Crimson will host in Cambridge, start on Friday, May 6.