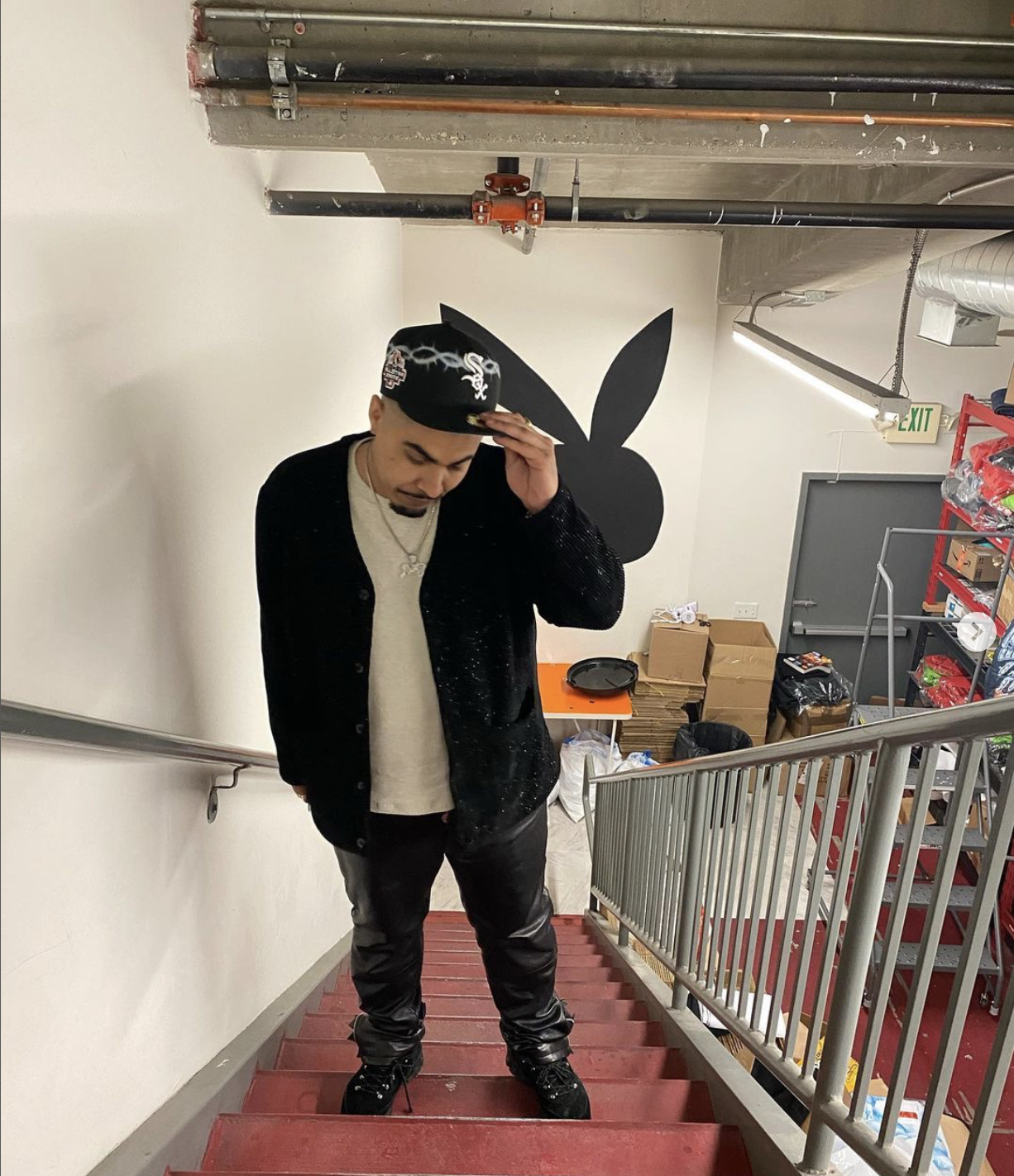 Blazzy is a streetwear designer from Southeast Los Angeles. By Courtesy of Blazzy
By Ryan S. Kim, Crimson Staff Writer

Blazzy is a Los Angeles based designer with an expert eye for cool trends. An uncanny ability to unite the worlds of pop culture, hip-hop, and fashion has made the West Coast design powerhouse one to watch.

The Los Angeles native’s aesthetic talents have landed him collaborations with the likes of Lil Wayne, The Weekend, FaZe Clan, Air Jordan, Uber Eats, and Vlone. The clothing and pop culture merchandise available from Blazzy’s own Nothing Personal brand — such as a 100-piece puzzle of the in-game map from Grand Theft Auto San Andreas — are highly sought-after and regularly sell out.

Hailing from the city of Paramount in Southeast Los Angeles, Blazzy first found his passion for design as a graffiti artist in high school. According to the designer in an interview with The Harvard Crimson, he began by spray painting art inspired by the gang tags that are commonly found on walls in Paramount. Where “tag banging” is for the purpose of marking gang territory, Blazzy’s graffiti was simply a method of self-expression.

“I started by just tagging on walls,” Blazzy said. “And then, I decided to start doing stencils, and it got to the point where all the gangbangers and all the gang members in my area didn't know what to make of my stuff. They were wondering if this was a gang as well, or if I'm just doing my own creative thing.”

Expanding beyond Paramount, Blazzy took his talents to street art shows on Melrose Avenue in Hollywood, where he was inspired by the work of OBEY clothing founder Shepard Fairy, who famously designed the 2008 Barack Obama “Hope” campaign poster. It wasn’t until after Obama had won the election that Blazzy — a huge fan of OBEY — learned that it was Fairy who designed the iconic image.

“I remember a friend asked me about an OBEY shirt I was wearing like, ‘Do you know who Shepard Fairey is, why are you wearing that shirt?” Blazzy said. “I didn’t know and was completely dumbfounded. He put me on and I was blown away. This was another side of street art and graffiti that I hadn't been exposed to yet.”

Like Fairy, Blazzy isn’t just looking to sell tee-shirts. His store is called Nothing Personal, but the passion that the designer brings to each effort is as personal as it gets. His goal is to spread a message through his artwork. For example, the “Say No to Fentanyl” design capsule released last November via Nothing Personal calls attention to the opioid epidemic devastating families and cities across the United States. 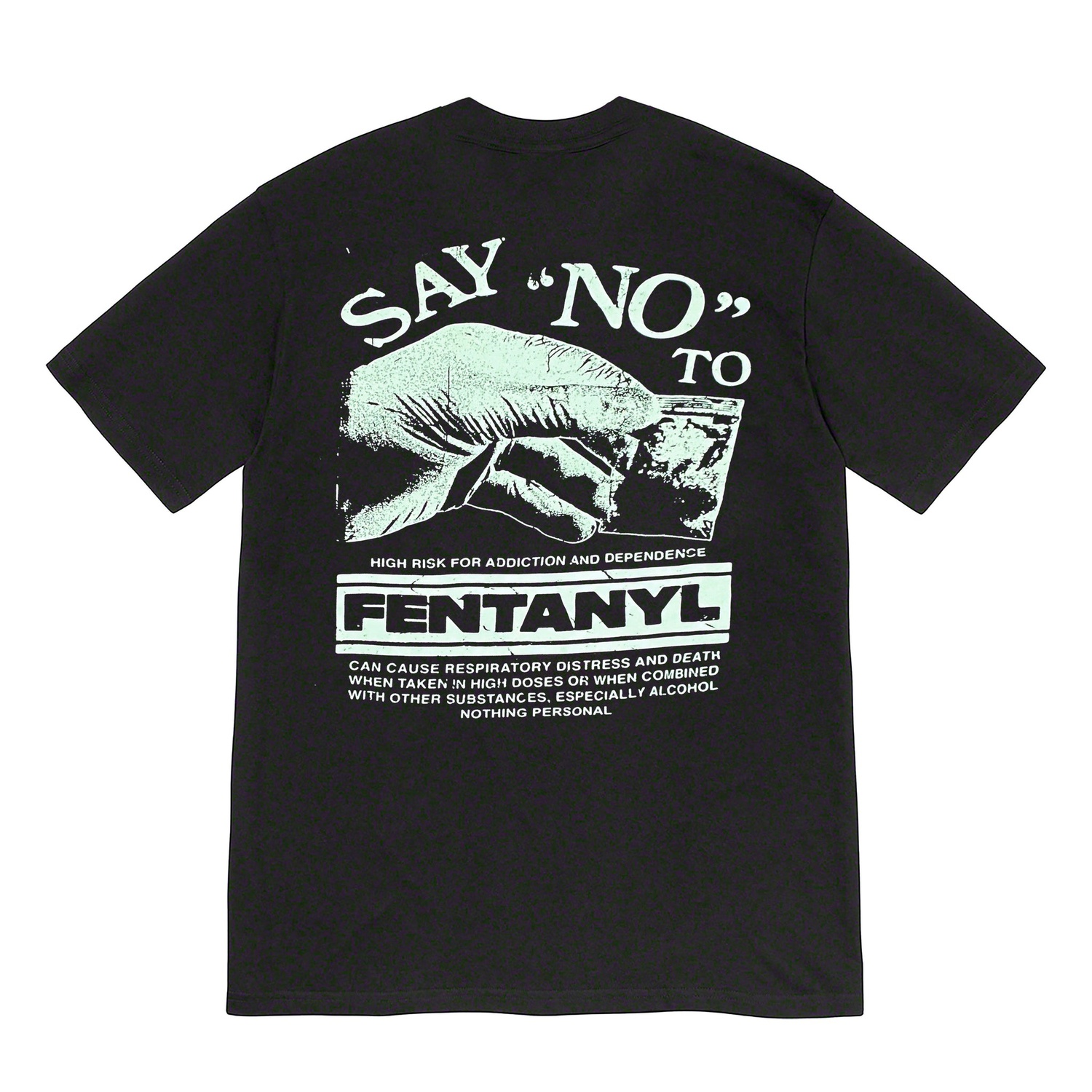 The back design of Blazzy's "Say No To Fentanyl" shirt. By Courtesy of Blazzy

At this point in his career, the designer shared that he only sells products that mean something to him. “I want to make sure that if I'm putting out a tee-shirt, it's something special,” Blazzy said. “The fentanyl shirt was the only tee-shirt I dropped last year, just for the fact that I wanted to make a statement. I want to release products that people can relate to and are going to find passion in.”

Another of Blazzy’s products is a police car-shaped candle that burns for up to 72 hours. It is listed under the acronym “A.C.A.N.D.L.E.” or “All Cops Are Negligent Dangerous Law-Breaking Enemies.” It is a response to the police murder of George Floyd and the subsequent 2020 summer protests that called out racialized police brutality in American cities. “The cop car candle just came from making a list of things that I would like to burn,” Blazzy said.

First picking up Photoshop during Gucci Mane’s mixtape era in the early 2010s, Blazzy is heavily inspired by the music he listens to. The designer originally went by the name “Sandblaster,” before shortening it to Blazzy in the fashion of Kanye West’s “Yeezy” moniker. According to Blazzy, he was especially inspired by the album artwork of eclectic NorCal artist Lil B.

“I just fell in love with all the mixtape art,” Blazzy said. “Especially with Lil B dropping the ‘Green Flame,’ the ‘Red Flame,’ ‘Obama BasedGod’ and all these tapes, I thought it was crazy that you could be part of music and not even do music necessarily.”

These days, Blazzy’s career is woven into the fabric of the L.A. hip-hop scene. The designer is a regular at No Jumper, a media company based out of the city that has strong ties to L.A. artists like Shoreline Mafia and the late Drakeo the Ruler. Blazzy shared that Stinc Team duo OTM are his current favorite rappers.

“I wouldn't be doing this if it wasn't for music,” he added of his art. “I love music, I'm so thankful that I'm part of the conversation at times. I think that streetwear and hip-hop go hand in hand, I really do.”

Blazzy got his professional start designing album covers for rappers like Chief Keef, before making the jump to merch design for artists like Lil Wayne. The LA designer was the mind behind the “Free Tay-K” merch tee that took the internet by storm after Texas rapper Tay-K cut off his ankle monitor and fled house arrest in 2017.

However, Blazzy credits the 2018 Weezy “Carter V” tee shirt he designed in collaboration with Chinatown Market as the product that gave him his start in the industry. 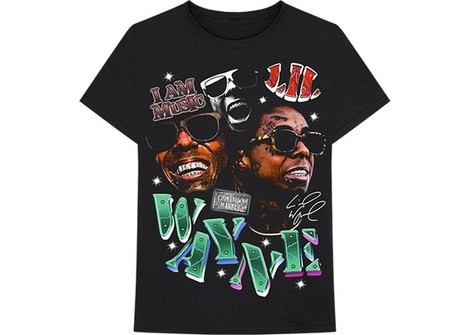 The high sales of Blazzy’s “Carter V” shirt art earned the designer a salaried position at Chinatown Market. Getting his start as a solo graffiti artist, Blazzy now has his own office and a team of people that work for him.

“I'm finding myself explaining who I am now a lot more than I was like, a year or two ago because it was all just streetwear people before but now it's like, ‘Blazzy, what the fuck do you do?’” the designer said. “It’s exciting to know I'm still reaching new people.”