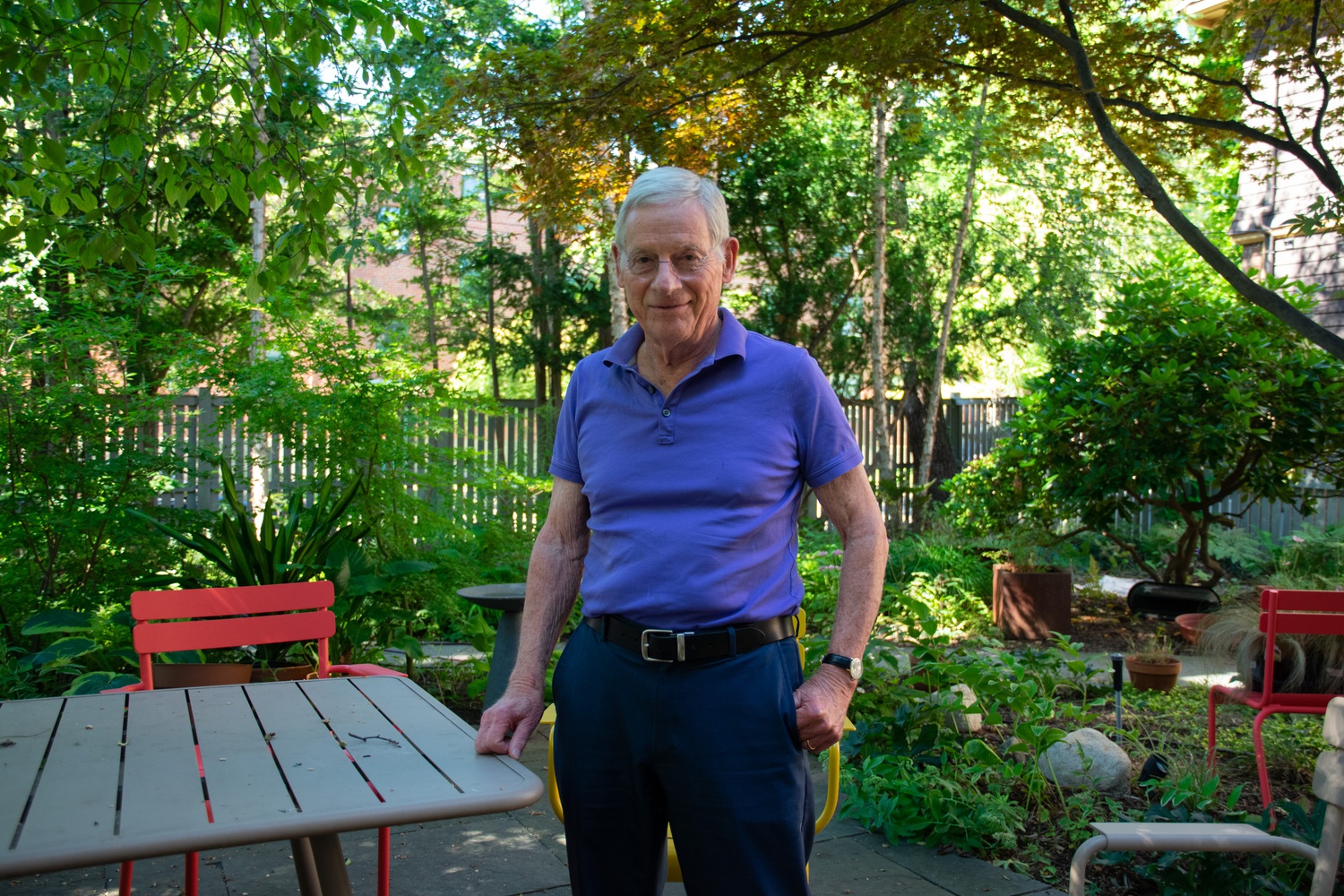 Harvey C. Mansfield has taught political philosophy at Harvard for over half a century. One of the few outspoken conservatives on the faculty, he has been a sharp critic of political polarization on campus. By Julian J. Giordano
Advertisement
Advertisement

One of the University’s most prominent conservative faculty members sat down with Fifteen Minutes to discuss political polarization on campus. “The Harvard Commencement is something like the Democratic National Convention,” he says. “And that’s a hell of a way to run a university.”
By Maliya V. Ellis

Harvey C. Mansfield received his undergraduate and PhD degrees in Government from Harvard. He has taught political philosophy since 1969.

Fifteen Minutes: You’re originally from New Haven. So why didn’t you go to Yale?

HCM: I don’t know. My father was teaching there at the time. I can’t give a good reason. But having chosen Harvard, I’m strictly deep-dyed crimson.

FM: How did you first become interested in political philosophy?

HCM: I was a Gov major and I took Government courses. The first political philosophy was not until I was a junior. I wanted to be a Soviet expert. That was my first thought. So as a freshman, I took Russian. And then I figured out that I didn’t want to spend my life reading Communist propaganda or memos or whatever, [and that] archives and political philosophy would be much more interesting, and I guess I found that to be the case.

FM: Today, you’re one of the most visible conservative faculty members on campus. Were you always a conservative, or have your political views shifted over time?

HCM: My political views shifted just about the time I graduated. I was a liberal through my undergraduate time, voted for Adlai Stevenson. I think that’s pretty much the last Democrat I voted for as president. The issue on which I changed was communism. I thought that the liberals were too weak on communism, in opposing it. So I was less interested in the domestic aspects of conservatism, and actually, that’s still the case with me. I’m mainly interested in foreign policy and keeping America strong and vigilant.

FM: On that subject, a recent survey in the Crimson found that 80 percent of surveyed faculty identify as liberal. Do you see that ideological imbalance as an issue on campus?

HCM: Yes, it’s a terrific issue. It’s an issue which is not accepted as an issue by most of my colleagues and by the university, generally. They don’t think it’s a problem that Harvard is mocked by half the country for the things which it does gratuitously, to provoke them. The Harvard Commencement is something like the Democratic National Convention. And that’s a hell of a way to run a university, to maintain its impartiality and its devotion to veritas, to truth, just to go out of your way to provoke people who happen to have different politics, instead of inviting them to come and even just give a talk. How can that be in Harvard’s interest?

As to hiring, I don’t think a conservative has been hired in the Faculty of Arts and Sciences in the last decade. And it’s probably been going on longer than that. Maybe there’s one or two, but if so, they stay hidden. Because if you’re conservative and want to get on with your colleagues, you have to indulge in self-censorship, and I think a number of students do that as well. But I can’t get my colleagues to think of this as a problem.

FM: What do you think Harvard could do to try to improve ideological diversity on campus?

HCM: It would be easy to simply have the president or the deans invite conservative speakers, have a lecture series. You should just confront the objectors and the protesters. You should take them on. I think most people are in favor of free speech, and it isn’t free if you’ve got only one side. So that’s something which could be done immediately, starting right now. Whereas hiring, that would take a very long time to correct.

And they could change the Commencement. One year you could have a liberal, and the next year a conservative. That would improve things mightily. I've said that to several presidents, and they usually respond, ‘Well, we want Commencement to be fun, and not to be a protest.’ But if you say that you surrender to the protesters.

FM: In the description for your Democracy and Inequality course this semester, you describe books like Plato’s “Republic” and Tocqueville’s “Democracy in America” as “beautiful books.” Why are these books still relevant, and how do you evaluate a work to know if it’s a classic?

HCM: Well, a classic book is a book that treats permanent problems, not passing ones. Permanent problems like democracy and inequality. And they’re beautiful books because every word in them counts. They’re, in some ways, easy to read, because it’s not crazy or irrational or confused. But they’re thought-provoking, so it can take a very long time to read a page, or you can go through quickly. It’s good to do both. And, of course, they’re beauties of style. Beauty of form and expression and thought. And it’s just the intelligence that makes a book worth reading long after you’ve died.

FM: Do you think your political views impact what type of students take your class?

HCM: Yes, they smoke me out. It’s funny. A few years ago, I gave a freshman seminar on Gulliver’s Travels, and it was given in the fall, so this was the first course they were taking at Harvard. Gradually it turned out, as the weeks passed on, that this was a pretty conservative bunch. They had somehow located me as a friendly voice before they got here, or as soon as they got here. Just talking about Gulliver’s Travels, why would that be conservative? It isn’t, really.

FM: Do you see that self-selection as a problem?

HCM: Sure, it’s a problem. It would be good if I could get more liberals. And I think about what I could say that would attract them that wouldn’t spoil my message or force me to say things that I don’t think are correct.

FM: I know you are conservative, but are you a Trump supporter?

HCM: No. I voted for him in 2020. I’m definitely not a Democrat. He did some things that Republicans like, and some things that they don’t — all his boorishness. So for the Democrats, they put those together. Whereas to a Republican like me, there were some good things that I liked, like his Supreme Court appointments, tax cut, the turn against China, things like that. But then, the January 6 thing, I crossed him off my list totally. I never want to see him again. Because that was what I feared and a lot of other people feared would happen during his presidency, but didn’t quite. I think he’s had a very bad influence on America and on the Republicans, and they need to get rid of him.

FM: Your 2006 book, “Manliness,” defended biological differences between the sexes and received a lot of pushback. Have your views on those differences changed since?

HCM: No, they haven’t. They’ve been confirmed, in my view. I think we should profit from the virtues of each of the two sexes. There’s a lot of overlap, so if I start listing these things, you can immediately think of many exceptions, like manliness. In fact, the first manly person that I mentioned in my book is Margaret Thatcher, just to show my good faith. But something like that prevails more in the male sex than with women. I think that’s important.

We’ve seen since the women’s movement that women do a perfectly good job as doctors, lawyers, professors, and so on. And so it’s good to exploit that kind of intellectual talent, which otherwise gets overlooked, not developed, when women just stay at home. But I think that the way in which women live and the way they think remains different. With their career, they’re always thinking about being a mother, too. And that’s the difficulty of it, because they require opposite traits. To be good at a career, you have to focus. To be good as a mother, you have to be open. That women have something like a maternal instinct I think is quite true and obvious and should be accepted. But to be a good mother is to be different from a man or a father, in many ways. You shouldn’t think of the two as just substitutable, or that the virtues of either can be dismissed as useless or harmful.

FM: I don’t know if you’re on Twitter, but some students on Twitter have complained about some off-color comments you’ve made in class that could be offensive. Is that something you try to do intentionally?

HCM: A little bit. I want to keep the parameters of free speech, so I try to test the borders sometimes. Certainly I am sexist. I say that plainly. I think there are differences in the sexes, and I think they ought to be respected, and to some extent laughed about. It’s good for men and women to tease each other. And it’s very bad for students as they do today to take offense so easily.

FM: For all your criticism of Harvard, you’ve been here since 1969. What do you like about Harvard that has stayed consistent throughout your time here?

HCM: The one thing that’s stayed pretty constant is the students I get in my courses. High quality and interested and lively, intelligent. The students are still that way despite the changes in sex and race. You know, if I couldn’t see, I wouldn’t notice a difference. That’s been a kind of success I would say of Harvard and Harvard admissions, the ability to attract the best students.

FM: In 2012, you told our magazine that you didn’t have plans to retire just yet. Is retirement on the horizon now?

HCM: This will probably be my last year, [but] I haven’t declared it or decided. I just turned 90. That’s pretty old.

FM: What’s the story behind your signature fedora?

HCM: I went to England on a Fulbright after I graduated. I loved the way the Englishmen dressed, so I got sort of an appetite for an American version, to dress up a little and also to wear a hat. It keeps you cool in summer and warm in winter, and it looks classy and sets you apart.

FM: What do you like to do on a day off?

HCM: I’m a most ardent fan of Harvard and Boston teams, and pretty much all the sports. I’m at every Harvard football game at home. Away, I only go to New Haven.

— Maliya V. Ellis is the Magazine Chair of the 149th Guard. She can be reached at maliya.ellis@thecrimson.com. Follow her on Twitter @EllisMaliya.