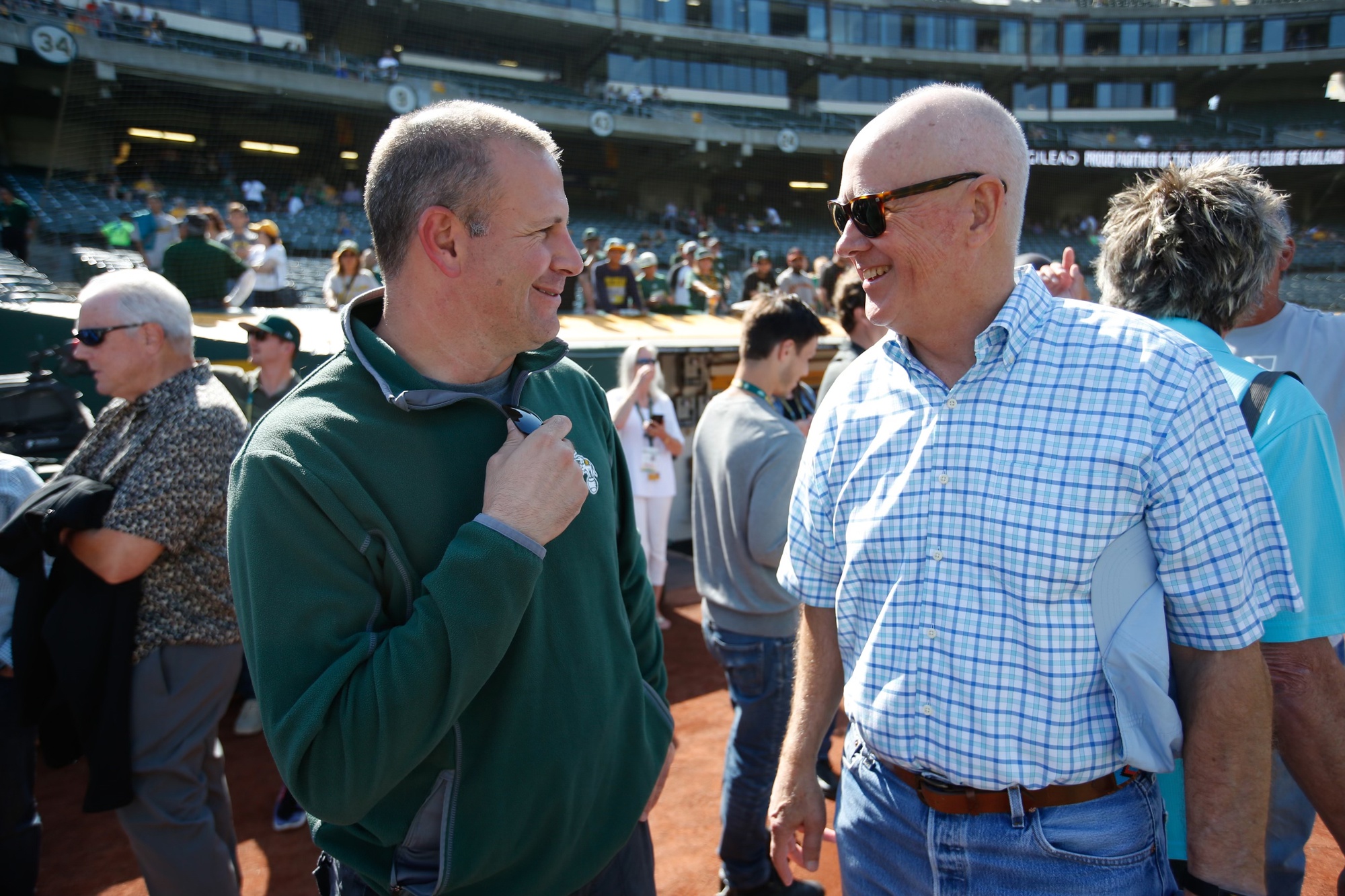 Former Harvard baseball captain and shortstop David Forst’s journey saw him transition from an exciting point in Harvard baseball’s success to being on the front lines of one of the most influential MLB front offices in recent memory.

Let’s take a trip back in time. The day is May 23, 1998, about a week and a half after Harvard baseball claimed an Ivy League Championship at Yale.

On this day, the Crimson traveled to Baton Rouge, L.A., to face California State University, Fullerton in the South II Regional round of the 1998 NCAA Division I Baseball Tournament. A win would push the Crimson into the regional final, where it would be one game away from clinching a spot in the College World Series for the first time in 24 years. But those aspirations faded quickly, as Cal State Fullerton demolished Harvard, with a final score of 11-3.

It was a tough way to end the season, but the program was the best it had been in decades. Coming off a third consecutive trip to NCAA regionals, the Crimson capped off what was its deepest postseason run since 1983.

For senior captain and shortstop David Forst ’98, the loss marked his last time playing for the Crimson. In his final season, Forst slashed a line of .406/.437/.624, earned a third team All- American selection, and was the common denominator for the Crimson’s recent success.

A year later, Forst attended the 1999 Boston Red Sox spring training camp, followed by stints in Independent League Baseball later that summer, with nothing materializing. At the end of the year, Forst’s playing career ended, but his career in the world of baseball was just beginning.

“I think playing baseball at that level sort of cemented the passion that I always had for the game,” Forst said.

Instead of pursuing his job search in other industries, he made a shift, just as any shortstop would, when the batter at the plate changed. But this time, instead of going from short to second, he took a slightly different route – from the playing field to the front office.

“I think we all dream about playing [professionally],” Forst said. “When someone else makes it clear [that you no longer can], then the next best thing is trying to make it your everyday life.”

In 2000, Forst joined the Oakland Athletics as a front office scouting executive and began a journey that would change the face of modern baseball. Under the guidance of fellow Harvard Alum and current Cleveland Browns Chief Strategy Officer Paul Depodesta and then-general manager Billy Beane, the Oakland A’s front office created the “Moneyball Approach” to baseball operations.

Moneyball is a method that incorporates sabermetrics – or a type of analysis that factors physical scouting, statistical analysis, and financial management – in baseball front office planning. The two latter aspects of sabermetrics became Oakland’s forte. By decreasing the importance of the “eye-test” and focusing on underutilized statistics, such as On Base Percentage (OBP) and walks (BBs), Oakland achieved immediate success, making the playoffs within the first two years of Moneyball’s implementation. 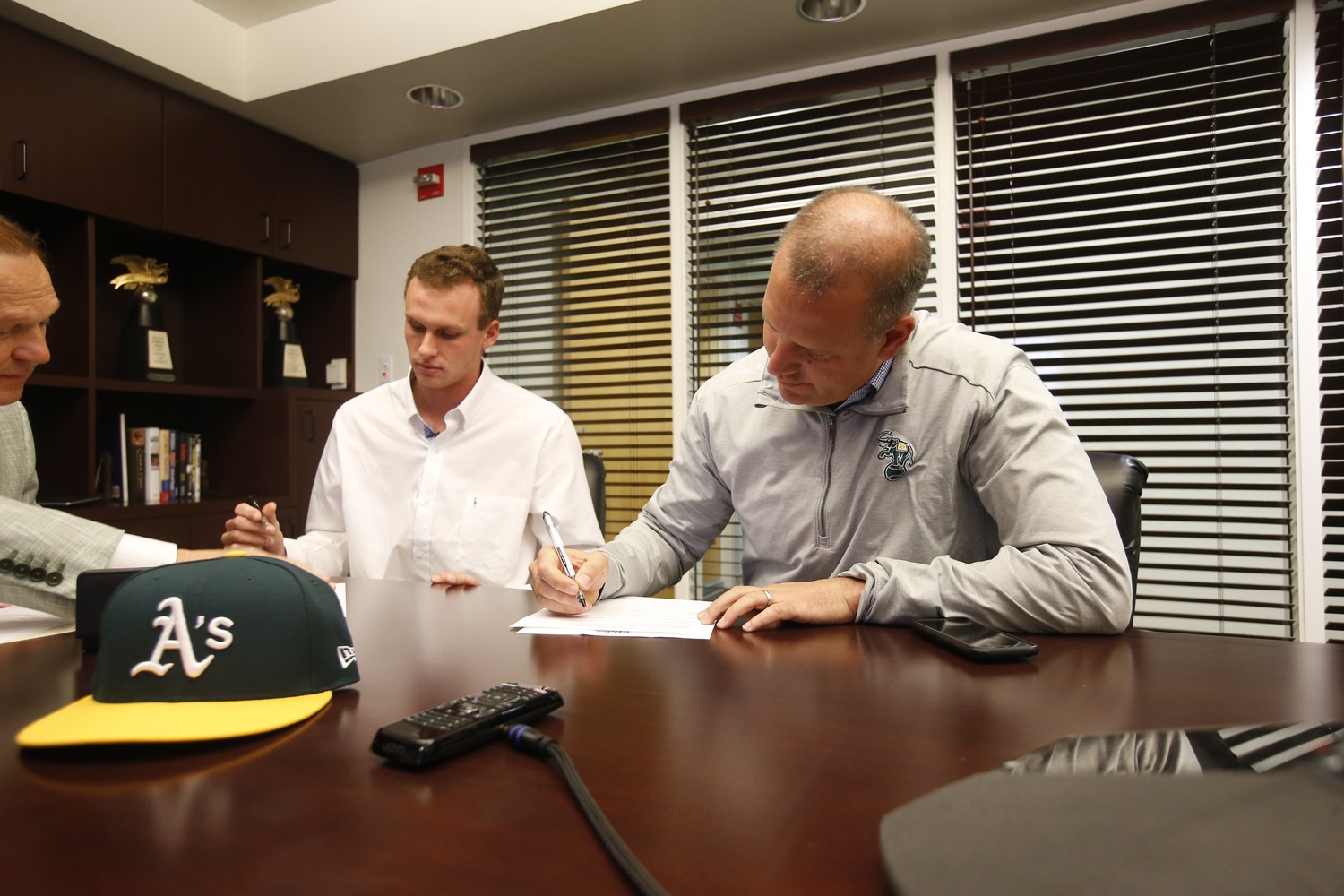 Forst joined the Athletics front office in 2000, as the "Moneyball" approach, featured in the book and film of the same name, was coming to life. By Courtesy of David Forst

Since 2000, Oakland has had the sixth winningest record in all of baseball. They did this all while having one of the lowest payrolls in the MLB. Moneyball’s system succeeded under tight fiscal constraints and became the blueprint for teams across the MLB.

“We were sort of considered different simply for considering college stats in evaluating players for the draft, and we're not talking advanced stats, either,” Forst recalled. “We were talking about on base percentage and walks. Whereas now, if you don't have exit [velocities] and launch angles and spin rates on just about everybody on your draft board, you're falling behind, so it is a totally different set of measurements and numbers that we're calling ‘analytics’ today than we were 20 years ago.”

Free-agency and the MLB draft — the two most important facets of the game related to roster construction — most heavily felt the impact of the league-wide adoption of sabermetrics.

Utilizing these metrics gave smaller market teams, which do not have the same spending luxuries as bigger market teams, the ability to excel in free agent signings on mid-level contracts, as well as finding a reliable, concrete drafting strategy. In many ways, the MLB draft, which scouts both high school and college athletes, is a black box, but sabermetrics provides a means to identify and acquire college players who were more likely to succeed in the MLB.

For Forst, it all started in a room with Beane and Depodesta.

“The luckiest thing that happened to me was getting to work with [Beane] and the fact that he brought me in on just about everything from day one,” Forst said. “We had a small group when I first started. It was basically [Beane], [Depodesta], and myself in the front office.”

The Athletics made the playoffs for the next four years, reaching the American League Division Series (ALDS) from 2000 to 2003.

In 2004, Forst was promoted to Assistant General Manager to Beane after Depodesta left Oakland to run baseball operations for the Los Angeles Dodgers.

For the next 11 years, Forst kept this title, acting as Beane’s second-in-command. Over that time, Beane deferred more leadership responsibilities to Forst, which positioned him perfectly to the transition into his role today as de-facto President of Baseball Operations.

“[Beane] really sort of shared leadership responsibilities with me, which was incredibly generous of him and also the best way for me to learn on the job for now being the leader of our baseball operation,” Forst said.

In 2015, Forst was promoted to General Manager of the Athletics, where he sat under Beane’s role as Vice President of Baseball Operations.

In November 2022, Beane stepped down from the day-to-day baseball operations scene and moved towards an advisory role, making Forst the de-facto head of Athletics operations.

Forst give much credit to Beane for guiding him throughout his career and for helping him reach this point.

In the time that it took Forst to ascend to the top of Oakland’s front office hierarchy, the baseball world completely changed as a result of the A’s strategies in the early 2000s. The introduction of technology and widespread adoption of statistical analysis revolutionized the way front offices operate.

The technological revolution also affects the game’s efficiency and time management. In recent years, many fans give America’s pastime labels of “boring” or “slow,” but the MLB is actively pushing to change these associations. In favor of this, Forst cites the pitch clock as an example of a positive change that only improves the game.

“Honestly, [the change that was needed] was the pitch clock, and now that we're doing it I'm thrilled,” Forst said. “A lot of us have talked for years about wanting to speed up the pace of play. That's a (positive). I'm really glad we're doing it.”

Minor league baseball serves as a testing ground for future changes, including the addition of base runners on second at the start of extra inning games and, potentially the biggest change of all, robotic umpires. Traditional umpires are subjects of frequent controversy, mainly due to arguments over strike zone calls, but are also considered a key part of the game and its history. Forst leans to the former and welcomes innovation in this regard as well.

“I think we have an obligation to our fans to adjust the product and make it as entertaining as possible,” Forst said. “I do think automatic balls and strikes will become part of that as well. I think there's so much emphasis now on the strike zone.”

Technology as a whole has attempted to make a rather subjective sport into a quantifiable, objective endeavor. Thus, the foundation the Oakland A’s laid in the early 2000s seeped into other aspects of the game and will continue to innovate baseball in the future.

Forst, who now leads the A’s into a rebuild for the first time in decades, will have his work cut out for him in winter meetings in San Diego. For the first time, he will have full reign over the A’s front office, with a difficult task at hand.

“Our goal now is to build up the major league team,” Forst said.

For a front office that set the precedent for these circumstances, the Athletics will get their first true test at a technologically-influenced rebuild.

– Staff writer Jack Canavan can be reached at jack.canavan@thecrimson.com