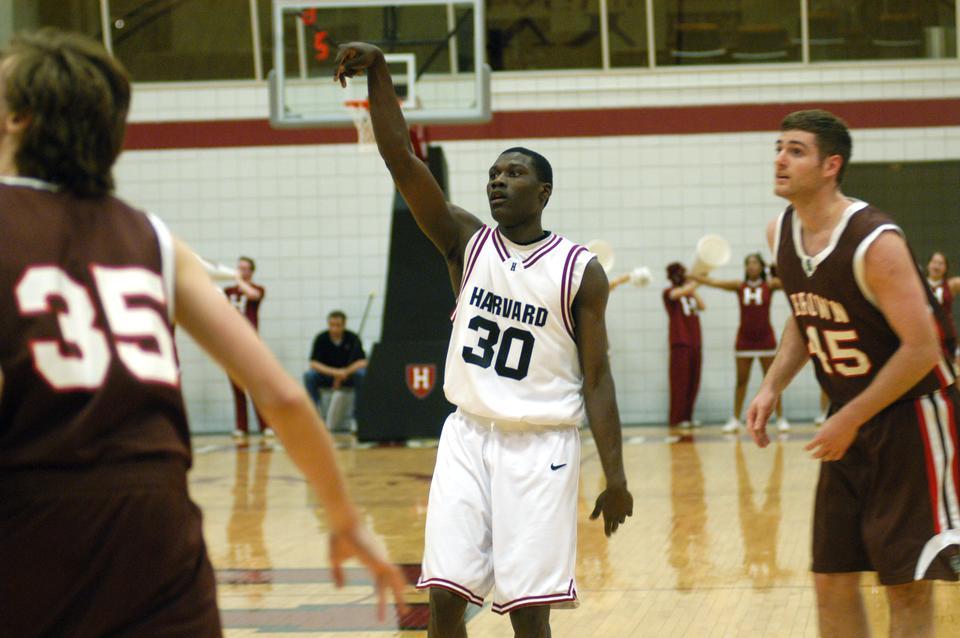 Sophomore Kyle Casey, back from a broken foot, will look to propel Harvard past Colorado at home. By Robert L. Ruffins
By Martin Kessler, Crimson Staff Writer

For the first time since 2007, a BCS-conference team will travel to Lavietes Pavilion when the Harvard men’s basketball team hosts Colorado tomorrow afternoon.

The Crimson (3-1) is looking to pick up a win over a top-conference opponent for the fourth straight season against a talented Buffaloes team (2-2) that returns its top three scorers from last year’s squad that finished eighth in the Big 12.

Colorado is led by a duo of elite guards in senior Cory Higgins and sophomore Alec Burks.

Higgins, the Buffaloes’ leading scorer last season, has not showed signs of slowing up in his senior year, averaging 18.8 points and 5.3 rebounds through four games.

Meanwhile, Burks—a projected first-round pick in this June’s NBA draft—has gotten off to an even hotter start, scoring 23 points per contest.

A 6’6” guard with the ability to get to the basket and stroke the ball from mid-range, Burks could provide some matchup problems for the Crimson. Harvard’s top perimeter defender—sophomore Brandyn Curry—is likely too small at 6’1” to match up with Burks, meaning the task will fall on either classmate Christian Webster or junior co-captain Oliver McNally.

Like Burks, Webster, a 6’5” wing, has had an impressive start to his sophomore campaign. Four days after netting a career-high 29 points at Mercer last Saturday, Webster nailed a game-winning three-pointer against Bryant to give the Crimson its third win of the season.

If Harvard hopes to come out on top tomorrow afternoon, it will have to rely on Webster’s offensive production.

Also crucial to the Crimson’s success will be its frontcourt.

Colorado’s two losses this season have come in games where the Buffalos were outrebounded. Junior co-captain Keith Wright and sophomore Kyle Casey—who is returning from a broken foot—will have the primary responsibility of winning the battle on the boards.

If the Crimson can control the glass, the squad has a chance to come away with its first victory against an opponent from the Big 12 in program history.

Under fourth-year head coach Tommy Amaker, the Crimson has had recent success against opponents from the power-six conferences, racking up a 3-5 record while picking up wins in each of the past three seasons.

In Amaker’s first season at the helm, the Crimson managed to pull out a 62-51 win against Michigan in front of a packed crowd at Lavietes Pavilion.

Harvard will get its first shot at extending its streak tomorrow afternoon, but if the Crimson falters, it will have three more chances to pick up a victory against an opponent from an elite conference before the season’s end.

Harvard will travel to Michigan (Big 10) on Dec. 4 and then meet Connecticut (Big East) in Hartford on Dec. 22.

Finally, the Crimson will look to make it three in a row against Boston College (ACC) on Jan 5.