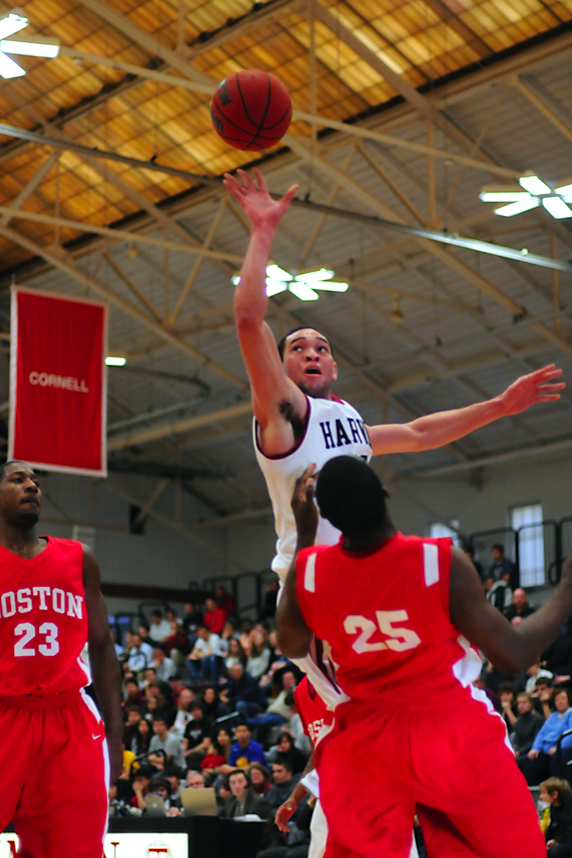 Sophomore Christian Webster, shown above in earlier play, and junior co-captain Keith Wright were both injured in Saturday's contest against GW. While they are both listed as day-to-day, their teammate, rookie Laurent Rivard, will be taking some time off to let his persistent ankle injuries heal.
By Timothy J. Walsh

The Harvard men’s basketball team took down George Washington last Saturday, 67-62, with its top two scorers ailing on the bench. Thankfully for the Crimson, it looks like junior co-captain Keith Wright and sophomore forward Christian Webster will not remain on the sideline for too long.

“We’re hopeful for Saturday,” said Harvard coach Tommy Amaker of each player’s return. “Right now, they both are going through the process of getting treatment and trying to rehab their injuries.”

After Webster scored eight points in 14 minutes in a homecoming of sorts (his father played for George Washington in the 1980s), the D.C. native took a shot to the hip that left him immobile. The injury, which is being described as a hip pointer, kept him out of the remainder of the contest.

Wright, who is averaging a team-best 14.5 points and 8.4 rebounds per game, was also banged up in Saturday’s contest. After a blow to the ribcage, the big man experienced trouble breathing and missed the final 15 minutes of the game.

“They’ve been out of practice thus far,” Amaker said. “[But] we’re hopeful that they’ll be able to play.”

The bigger concern for the Crimson might be one of the heroes from Saturday’s win: freshman Laurent Rivard. Though the forward mustered 16 points in the second half, he was battling an ankle injury that has relegated him to a walking boot off the court.

“He’s had an ankle and an Achilles issue all year,” Amaker said. “The only thing that’s going to be able to allow it to heal is to take complete time off.”

Given Rivard’s increasingly important role as a sixth man on the Crimson (the freshman has reached double figures in eight of his last 10 games), the possibility of a break is remote.

“He’s been nursing it all the way through,” Amaker said. “He’s a tough kid. He’s been able to play through pain, and we anticipate he’ll continue to do it.”