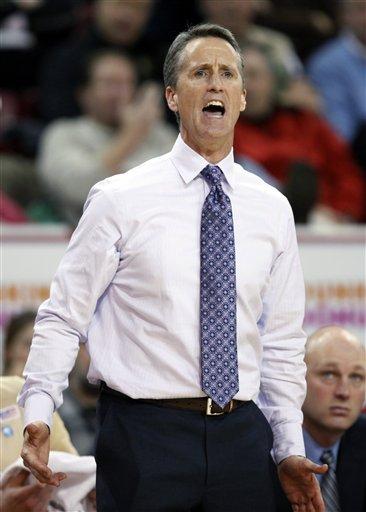 Former Cornell and current Boston College men's basketball coach Steve Donahue, shown above during Thursday night's matchup between Harvard and BC, shared his thoughts on the Crimson and its place in Ivy League history.
By Martin Kessler, Crimson Staff Writer

You would be hard-pressed to find someone who knows Ivy League basketball better than Steve Donahue. The second-year Boston College head coach spent 10 years as an assistant to Fran Dunphy at Penn from 1990 to 2000, and another 10 years as Cornell’s head coach, leading the Big Red to three Ivy League championships and a berth in the Sweet Sixteen in 2010. So after the Crimson’s 67-46 win over the Eagles last night, Donahue shared his thoughts on the Harvard men’s basketball team and its place in Ivy League history.

“There are a couple things that make [Harvard] really good, but defense is certainly one of them. In my years at Cornell, I thought we hurt them on the offensive end against their defense. In my last year, I think we had one game where we had [22] assists, [eight] turnovers, scored 86 points [against] the same kids that were out there tonight. I think that’s a lesson to be learned with younger players developing: in two years you get bigger; you get stronger. Just watching the Harvard guys communicate out there, how they know each other so well, and they have such confidence and trust in each other. [Harvard coach Tommy Amaker’s] done a fantastic job just developing that defense.

“The other thing that’s impressive with them is they start three guys that started three or four years in [Oliver] McNally, [Brandyn] Curry, and [Christian] Webster, and none of them average over [seven] points, and they’re content with winning. That’s when you get a dangerous team. Kids don’t care. When they’re open they shoot it. [If] they don’t, they move the basketball.”

In your last at Cornell, you might have had one of the best Ivy League teams of the past 20 years. How do you see this Harvard team comparing?

“It’s really hard for a lot of reasons. I grew up on Ivy League basketball in Philadelphia. I saw a No. 1 ranked Penn team in 1971. I saw a ’79 Penn team that went to the Final Four. My teams at Penn had three NBA players. The ’98 Princeton was ranked seventh in the country, one loss. And then obviously the runs Penn made in the 2000s and then our team [at Cornell]. What you realize is, when you can get it going at those places, the intelligence and the unselfishness that exists on those teams is what separates them. I think Harvard has that same formula. Hard to compare who is better or not, but that’s definitely something. Those kids share the heck out of the ball, they defend the whole time, [and] they don’t care how it gets done. That’s why they’re dangerous, and that’s why they are good."

You guys made only three three-pointers today. The previous season low was five. Was that you guys just missing shots, or was that something about Harvard’s perimeter defense?

“I think Harvard does a very good job of chasing you off the line. First, they switch a lot of things. That does help. It keeps guys in front. You don’t get miscommunication. They switch all one through four. The thing that’s hard is they’re so aggressive on ball screens. When you get the ball moving you’d think that they would give up an open three, but what they do is they chase you off that line. They fly at you.”