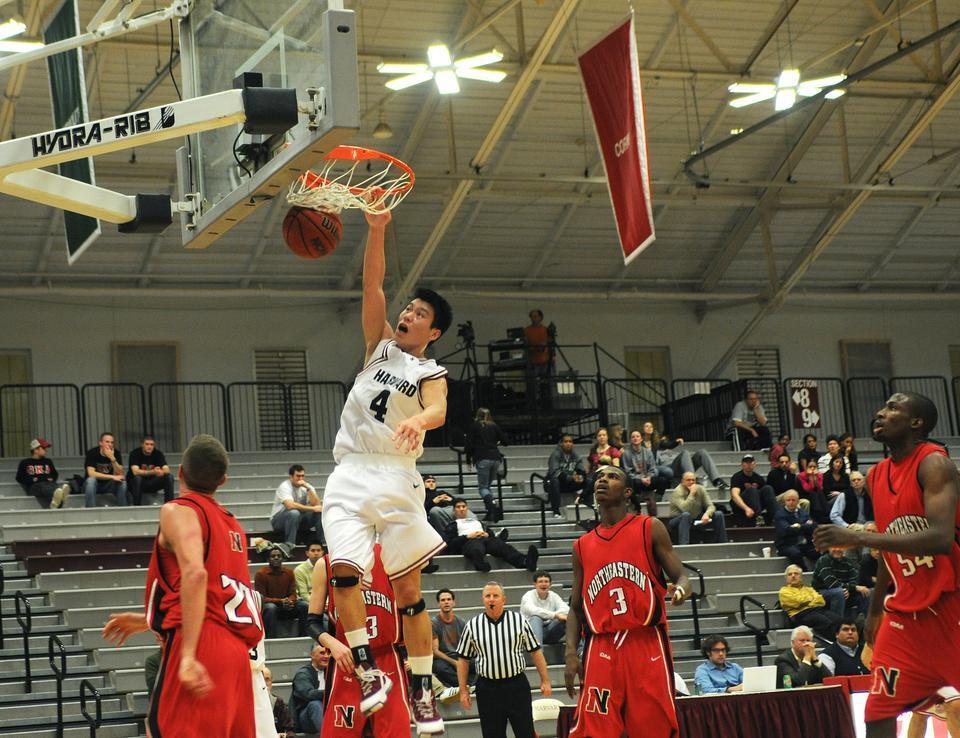 With 20+ points in three straight games for the Knicks, Jeremy Lin '10 has become a media darling and attracted national attention.
By Brian A. Campos, Crimson Staff Writer

We've heard all the nicknames and wordplay, but none captures the hype surrounding Jeremy Lin ’10 better than Lin-sanity. Sports fans around the nation—and especially in New York—have a huge case of it, and it's pretty clear why.

Before the season started, huge expectations were placed on a team that features two NBA All-Stars and a defending NBA champion center. The Knicks were supposed to vie for one of the top spots in the Eastern Conference and make a big run in the playoffs, but for the first 23 games, New York fans watched incredulously as their team moved into 10th place and lacked the chemistry needed to win it all. Critics blamed it all on the lack of a true point guard, and though rookie Iman Shumpert played well at the one spot in his first few starts, Shumpert was not consistent and exposed his tendency for playing as a combo guard.

New York coach Mike D'Antoni had already tried Toney Douglas, but he was clearly not the answer. D'Antoni also gave veteran Mike Bibby a try, but he couldn't get a fluid offense going. The Knicks then signed former All-Star Baron Davis, hoping that once back from a herniated disc injury, he could save the team from a losing season. New York also picked up Lin off of waivers in December to reinforce an inconsistent backcourt, but the second-year player was primarily kept on the bench, and in his limited time on the court, Lin didn’t do so well, to say the least.

Over a month passed since then—a period that saw Lin briefly go to the D-League—and Knicks fans had begun clamoring for D'Antoni's head and hoping for Davis to speed up his recovery. Last week, New York entered its only back-to-back-to-back series of the shortened season, and many analysts expected D'Antoni's head to roll if the Knicks did not grab at least one win from either the Boston Celtics, the Chicago Bulls, or the New Jersey Nets.

Two losses later, the Knicks hosted the Nets at Madison Square Garden, and D'Antoni needed to throw a Hail Mary. And so, D’Antoni gave Jeremy Lin a shot, and we have all been witnesses to Lin did to Deron Williams and the Nets, Devin Harris and the Utah Jazz, and John Wall and the Washington Wizards.

Lin may not have only saved D'Antoni's job for now but his as well. The former Harvard guard played well just in time for his contract to become guaranteed for the rest of the season. In an interview with Yahoo! Sports radio affiliate 95.7 The Game, Lin stated that the general manager told him Wednesday that his contract was guaranteed, admitting the news was "a sigh of relief." Lin did not disappoint later that night with a 23-point, 10-assist outing, despite the fact that the Knicks were still missing key players Carmelo Anthony (groin injury) and Amare Stoudemire (death in the family).

As Bill Simmons pointed out on Twitter earlier today, Lin is currently second in all of basketball in the player efficiency ratings, right behind none other than LeBron James. In his 12 games played, Lin is posting a PER of 26.83, .23 better than NBA All-Star Kevin Durant. With his improved play and the impressive stats, there are people already thinking about Lin’s future and how the Knicks should try to keep him.

Had D'Antoni not given Lin the opportunity, the former Crimson standout may have faced a similar fate as he did with the Golden State Warriors and Houston Rockets—both teams waived Lin to make space in hopes of signing a center. Now Rockets GM Daryl Morey is lamenting his decision to cut Lin, stating on Twitter that “we should have kept @jlin7. Did not know he was this good. Anyone who says they knew misleading U [sic].”

Another person who can’t be too happy is Wizards coach Randy Wittman, whose son, Ryan, used to play against Lin on the Cornell men’s basketball team. After the game last night, Ryan texted his father, joking how he and his Cornell teammates did a better job containing Lin than the multi-millionaires on the Washington team did.

While some are realizing their regret and pain, several others are rejoicing the emergence of the newest Knicks star. As described by The Post Game, the Asian-American community is excited to see the first Taiwanese-American player in the NBA thriving on one of the league’s biggest stages. The last time a player of Asian descent generated so much buzz came in 2002, when Yao Ming arrived in the NBA.

The NY Knicks Store is capitalizing on Lin’s breakout performances as well, sending out emails with the subject, “Pre-Order Your Jeremy Lin #17 Jerseys!” It’s a smart idea, especially since Knicks fans have chanted M-V-P to their new hero in the past two home games. Other T-shirt makers, like this one, also plan on reaping in the benefits.

Even though all these people and companies are happy with Lin’s success, no person can be happier than D’Antoni. He finally has a point guard who in three games has demonstrated that he can run the pick-and-roll, and that is what D’Antoni’s offensive system is all about. As The Back Page pointed out in December, Lin is efficient at scoring but can set up his teammates for the easy PNR. Center Tyson Chandler has found a new best friend in Lin, who is very good at sending passes Chandler’s way for the easy finish. The chemistry is so apparent that Madison Square Garden commentator and NBA Hall of Famer Walt “Clyde” Frazier always states how Chandler will be “taking [Lin] out to dinner soon.”

There is little doubt that Lin’s pick-and-roll should also work with Stoudemire, who is notorious for finishing those types of plays. What will be interesting to see is how Lin coexists with Anthony’s tendency to take over the ball and act as a forward-point guard. Apart from the two absentee stars, Lin has been playing well with the rest of his teammates, setting up open three-point opportunities to Steve Novak and helping Landy Fields, with whom Lin has developed a dorky handshake, take good shots.

Has D’Antoni found his new Steve Nash? It remains to be seen, though Nash himself is liking what he’s seeing. After three games, some, like Jalen Rose, are buying in to the hype, while others, like Stephen A. Smith, are still wary about the young point guard. But one thing is clear: Lin-sanity has hit the nation hard, and it’s showing no signs of letting up.