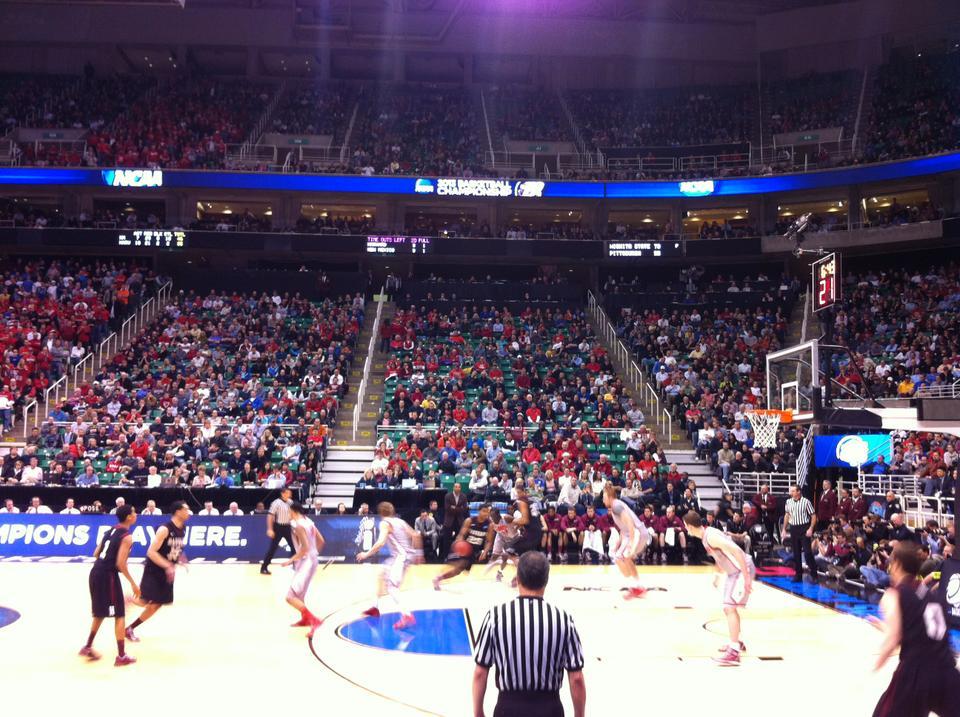 After a thrilling 68-62 victory of the University of New Mexico Lobos, the Harvard Crimson advance to take on the sixth-seeded Arizona Wildcats in the next round. Staff writer David Freed breaks down the matchup from all angles.

Before starting the analysis, here’s a quick primer on Arizona.

Arizona is a hard team to get a read on. The Wildcats won their first 14 games of the year, including a one-point home victory over the fifth-ranked Florida Gators and a nineteen-point victory over the Miami Hurricanes (unranked at the time). The Wildcats proceeded to slip up during Pac-12 play, losing seven of their next 18 games—including three times to UCLA.

The Wildcats boast a roster full of tournament experience. Xavier transfer Lyons was a part of two Sweet Sixteen teams at his former school. He leads the team in scoring and is second on the team in assists, but is erratic at best. Lyons shoots just 42 percent from the floor and 32 percent from three and turns the ball over almost as much as he dishes out assists (1.1 assist to turnover ratio). Hill is a carryover from the Arizona team that made the Elite Eight with Derrick Williams, and can play inside and out as a power forward.

After getting past New Mexico, however, Harvard will be excited to draw Arizona in the next round. Detailed below, the Wildcats’ weaknesses match up well with Harvard’s strengths and unlike first-round foe New Mexico, its strengths do not line up directly with the Crimson’s weaknesses.

Harvard and Arizona share only one common opponent—the California Golden Bears. The Crimson defeated Cal in Berkeley on December 29th, 67-62, while Arizona lost at home to the Golden Bears on February 10th, 77-69. The Wildcats’ loss to Cal was mostly due to the stellar play of two Golden Bears—guards Justin Cobbs and Allen Crabbe. Cobbs and Crabbe combined for 52 points, 10 rebounds, nine assists, and two steals against Arizona. The Wildcats allowed the Golden Bears to shoot 59 percent but were able to hold the Cal frontcourt to a combined 20 points and eight rebounds. On the offensive side of the ball, the ’Cats shot poorly from the field (39 percent) and Hill and Lyons were mostly to blame. The two combined for 29 points but needed 26 shots to do so.

Cal was the only nonconference win of note on Harvard’s schedule this year, and the Crimson beat the Golden Bears playing almost the exact same strategy that Arizona employed in its loss—let Crabbe and Cobbs get their points and stop everyone else. The two guards combined for 42 points and 11 rebounds against the Crimson, making 17 of 31 shots. However, the rest of the team managed only 20 points on 22 shots. Harvard took care of the ball well on offense (only eight turnovers) and made the Golden Bears pay from the foul line, making all but one of their 14 attempts. Although they shot a similar percentage to Arizona (37 percent), the Crimson pulled out the victory with clutch play late and solid games from junior Laurent Rivard (19 points, five threes) and sophomore Wesley Saunders (18 points).

There is little to gleam from the two games. Both teams played Cal in similar manners and did little to contain Cobbs and Crabbe. This isn’t indicative of either team’s struggles depending the perimeter—the Crimson’s defensive problems lay inside and Arizona took down guard-heavy Florida by keeping them scoreless in the last 2:35 of the game.

Unlike New Mexico—whose height and size most closely resembled Ivy rival Princeton—Harvard has played few teams like Arizona. The Wildcats bring a mix of unique experience and athleticism they used to blow away the slower Bruins in round one. Since most Ancient Eight teams beat you with backdoor cuts and perimeter shooting, Harvard has played few teams in conference to prepare itself for the Wildcats. The Memphis Tigers, which Harvard lost to on Jan. 19, are the only comparable team on Harvard’s schedule. Memphis has perhaps the most athletic roster in the country but—like Arizona—is not a particularly good three point-shooting team. In that game, Harvard knotted the contest up late, 50-all, before freshman Siyani Chambers fouled out and the Tigers ended the game on a 10-0 run. Harvard’s performance is indicative of its dependence on Chambers and its ability to keep up with an athletic team like the Tigers bodes well for Saturday.

On the other side of the ball, Arizona has never really played a team quite like Harvard. The Crimson plays four guards who all shoot better from three than Arizona shoots as a team (36.3 percent). Florida, the only comparably guard-heavy team the Wildcats played, is vastly different from Harvard in athleticism and style. Little to learn here.

Here is where Harvard’s hopes lie. Arizona allows opponents to shoot 36 percent from behind the arc. While they held Belmont—an excellent three-point shooting team—to under 30 percent in the first round, the Bruins were behind all game and launched threes from all parts of the court towards the end of regulation in an effort to make a comeback. Whereas New Mexico had the 21st best defense in the country according to Ken Pomeroy’s advanced metrics, Arizona’s is just 37th. For a Crimson squad that scored 68 points against the Lobos on just 42 shots, this is a good omen.

However, a lot of the round of 64 win was decided not with Harvard’s jump shots but the efforts of the Lobos shooters. Guards Hugh Greenwood, Kendall Williams, and Tony Snell combined to make only five of the 21 shots that they attempted and overall the Lobos made three of 14 three-point attempts. The Crimson shouldn’t rely on that happening with the Wildcats’ 18th-ranked offense. Sean Miller’s squad flashed solid ball movement against Belmont, going inside and out effectively. Center Kaleb Tarczewski had 12 points and eight rebounds and freed up Hill and Lyons on the perimeter (six threes made on 11 attempts between them).

ESPN’s Giant Killers model forecasts Harvard to have a 17.6 percent chance of beating the Wildcats come Saturday afternoon. The model’s concerns lie with Arizona’s ability to rebound the ball offensively, which will be exacerbated against the weak Harvard front line. The Crimson juggled three big men with three or four fouls for most of the second half against the Lobos and Smith and co. have a tendency to get into foul trouble, something they must avoid against the Wildcats. Johnson and Lyons will drive to the basket and challenge the Crimson inside time and time again. On the other side of the ball, Harvard will have to be even more efficient on the offensive side of the ball to keep up with the Wildcats. Although Arizona is inconsistent, it has shined in big moments this year (see its wins over the Gators and Hurricanes) and Harvard will need to mount another strong 40-minute performance to topple it Saturday. It’s main advantages lie with the three and Crimson fans will look to co-captains Rivard and senior Christian Webster to shine from deep again if Harvard is to make its inaugural Sweet Sixteen.