Give and Go: Football vs. Brown 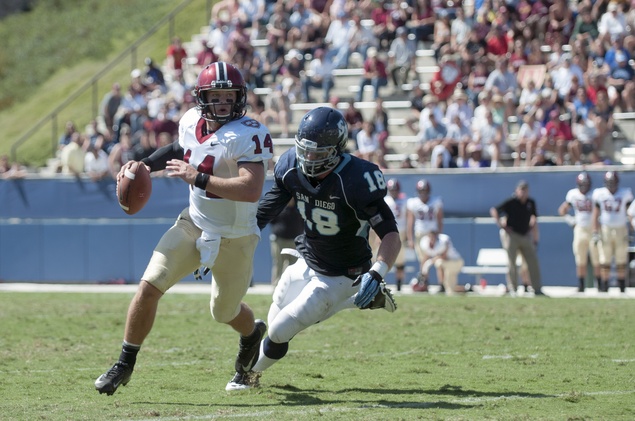 The Crimson looks to get off to a good start when Harvard opens Ivy League play against Brown this weekend. By Mark Kelsey
By Samantha Lin and David Steinbach, Crimson Staff Writers

In a weekly Back Page series, two of The Crimson's football beat writers give their take on the Harvard football team. The team has its eyes set on the home opener against Brown this Saturday night.

David Steinbach: Conner Hempel was probably envisioning a different beginning to his first career start as quarterback in the season opener against San Diego. Through the first two quarters of play, Hempel had only thrown for 39 yards.

Samantha Lin: But all that changed in the second half. Hempel ended the game with 345 yards in the air and four touchdowns, two to sophomore wideout Andrew Fischer. Hempel definitely didn’t play like it was his first start—I think his teammates and Coach Murphy having confidence in him helped him a ton.

DS: He looked like Colton Chapple out there at times, scrambling away from pressure and creating plays on the fly. That’s definitely a good sign for Harvard going forward.

SL: Did Hempel figure something out at halftime that helped him establish a rhythm with the receivers? The Crimson came out firing on all cylinders after halftime—it took the team all of two minutes to get from its own 36-yard line to the end zone, much of that thanks to Hempel. He passed for 26 yards on that drive and added another 28 with his legs before Stanton ran in for the score.

On the Harvard defense:

SL: Norman Hayes played a heck of a game Saturday—he had 0.5 sacks, a career-high 12 tackles, and the interception that clinched the victory for the Crimson. Monroe also impressed, notching eight tackles and breaking up four passes.

DS: Those numbers are all the more impressive considering the experience of the quarterback they faced, Mason Mills of USD. Last year, Mills set a school single-game record with his 38 completions against the Crimson.

SL: The defensive line also had a notable game—early in the second quarter, the Toreros had 1st and Goal at the 8, and the line held its ground, forcing Mills to make a bad throw to set up a field goal.

DS: That’s not to mention the two fumbles Zach Hodges recovered, one of which he ran back for the first touchdown of the game.

SL: Turnovers were key for both teams in that game—Harvard coughed the ball up twice as well, and a botched snap to the punter led to a turnover on downs.

DS: That aspect of the game will have to be cleaned up as the Crimson heads into its Saturday night showdown with Brown.

DS: This will be an interesting matchup because Brown finished a strong third in the Ivy League last year. The Crimson faced off with the Bears in the second game of the season in 2012, with Harvard prevailing in a 45-31 shootout.

SL: If Hempel’s offensive prowess continues, it might be yet another shootout—Brown’s returning a third-year starting quarterback in Patrick Donnelly, who torched Harvard’s secondary with 336 passing yards and three touchdowns last year.

DS: In that game, now-graduated running back Trevor Scales rushed for 136 yards and four touchdowns to carry the team. With no go-to playmaker having emerged out of the backfield so far this season, Harvard will likely need more of a balanced attack to move the ball this Saturday.

SL: The O-line did a good job of protecting Hempel on Saturday, but the real question will be whether they can open holes for Paul Stanton and Zach Boden, who at times struggled to find gaps. Playing at home should give the Crimson an edge, though—the team has won 13 straight at home and hasn’t lost to Brown in Harvard Stadium since 1998.