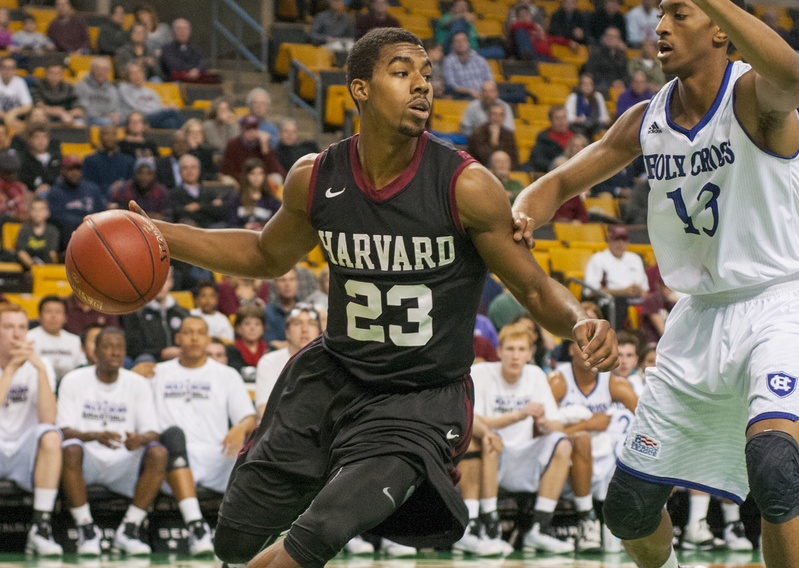 Harvard will need Wesley Saunders to provide his usual scoring punch after the senior wing struggled against Virginia on Monday.
By David Freed, Crimson Staff Writer

After a blowout of historic proportions, the Harvard men’s basketball team (7-2) looks to rebound Sunday (2 p.m. EST, PAC-12 Network) against the Arizona State Sun Devils (7-5) in its third chance for a marquee nonconference victory. Below, The Back Page takes a look at the three main things to keep your eye on as Harvard starts the second half of its nonconference schedule.

Bouncing Back: Harvard’s 76-27 loss to Virginia last time out was the Crimson’s second-worst of the Tommy Amaker era and by far its most putrid offensive performance of the season. Starting backcourt Wesley Saunders, Agunwa Okolie, and Siyani Chambers combined to go 0-24 from the field and combined for just five points in the game. Chambers had his worst game of his career, missing all 10 shots and not registering a single assist.

However, Amaker’s squad has historically been exceptionally resilient. The team last lost two consecutive games in March 2013, when back-to-back losses to Penn and Princeton had all but eliminated the Crimson from the conference race. A Princeton choke, in the form of back-to-back losses to Yale and Brown, gave Harvard the championship, and the Crimson memorably notched its first-ever NCAA Tournament win two weeks later. Expect Harvard to reverse course on Sunday.

Home Sweet Home: Although the Sun Devils made the tournament last year for the first time since James Harden patrolled Wells Fargo Arena, the team has regressed this year. Arizona State has lost five of its last nine contests and does not have a win over a top-100 KenPom squad. Despite a 6-1 record at home, the squad is a pedestrian 1-4 away from the friendly confines of Tempe—almost a perfect reflection of Harvard’s 6-0/1-2 home/away split. Over the last two years, the Sun Devils are 23-2 at home but have won just six of 21 contests on the road.

Wes Side Story: No player was more conspicuously absent in the loss to Virginia than Saunders, a fringe Wooden Award candidate who came into the contest averaging more than 20 points a game. Virginia coach Tony Bennett instructed his players to stay on the ground and not bite at any of Saunders’ myriad head and ball fakes in the lane, forcing the senior wing into his worst shooting night of the season. Sunday, Saunders may be matched up with Devils wing Shaquiell McKissic, who averages 10.5 points and 4.9 rebounds a game himself. McKissic, neither the foul shooter (54 percent) nor distributor (1.8 assists a game) that Saunders is, will pose problems for the stiff Harvard interior defense. If Saunders can contain him as he did UMass guard Derrick Gordon, while providing his usual scoring punch, Harvard will be able to bounce back.