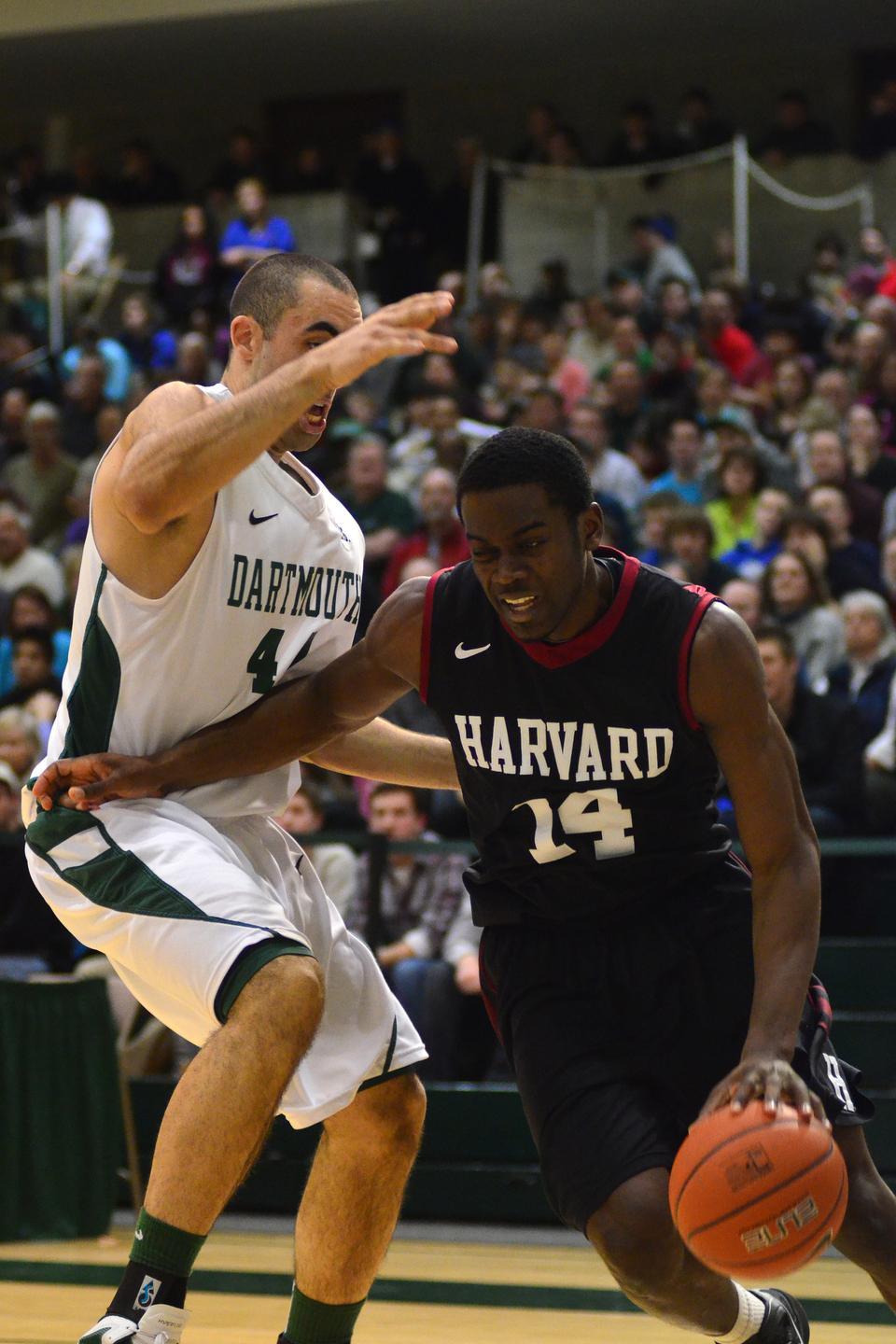 With the Crimson struggling offensively, the team will look to co-captain Steve Moundou-Missi to lead its defense against Grand Canyon.
By David Freed, Crimson Staff Writer

After consecutive losses, the Harvard men’s basketball team (7-3) continues its three-game road trip looking for just its second win in five road games against Grand Canyon (8:00 p.m., American Sports Network). Below, The Back Page takes a look at the three main things to keep your eye on as Harvard closes out its 2014 schedule.

Failing to Close: After taking a 49-point loss a week earlier, the Crimson’s 10-point loss to Arizona State Sunday represented an improvement, but the performance was less than stellar. After putting up 23 combined points in the first half, Harvard’s starting backcourt of co-captain Siyani Chambers and senior wing Wesley Saunders had just two points on nine shots in the second half. Chambers continued his season-long struggles from the field, making just three of eight shots to bring his field goal percentage to 31 percent on the year. Harvard, which trailed by just four points at halftime, had just 18 points in the second half against arguably the PAC-12s worst team. Grand Canyon is a couple steps below Arizona State, but after failing to score 30 points in each of its last four halves, Harvard will want to jump early on the soft Antelope defense.

A Notable Trade-Off: Chambers, however, is just one-half of a struggling pair of co-captains for the Crimson. Co-captain Steve Moundou-Missi, arguably the team’s most consistent performer last season behind Saunders, has seen his offense shrink this year as he has taken a larger defensive role. The senior forward is averaging career highs in rebounds (6.5 a game) and blocks (2.1 a contests) but is shooting just over 40 percent from the field on nearly eight shot attempts a game after making 52 percent or more of his shots his first three years. Neither Moundou-Missi nor Chambers has provided effective spacing with what were advertised as improved jump shots, allowing opponents to clog the lane to shut down Saunders—whose game is based on his ability to get into the lane. The two co-captains are the clear players to watch as the Crimson move through the last half of its nonconference schedule.

Rounding Back Into Form: Harvard’s two worst offensive outputs of the season have coincided not only with the program’s first back-to-back losses since March of 2013. A possible explanation for the team’s struggles is the lack of practice time. Harvard had 13 days off before playing UVA during finals period and another seven days off before Arizona State, during which time many players went home for holiday celebrations. Various players joined the team directly in Phoenix instead of traveling with the rest of the squad, and the lack of practice is a possible cause for why a team that scored in the 70s five times in its first eight games barely cracked a combined 70 in its last two outings. The team has no more than six days off between each game in January, and with increased practice time may come a return to offensive form.