Everyone Except Brown Can Win the Ivy Football Title 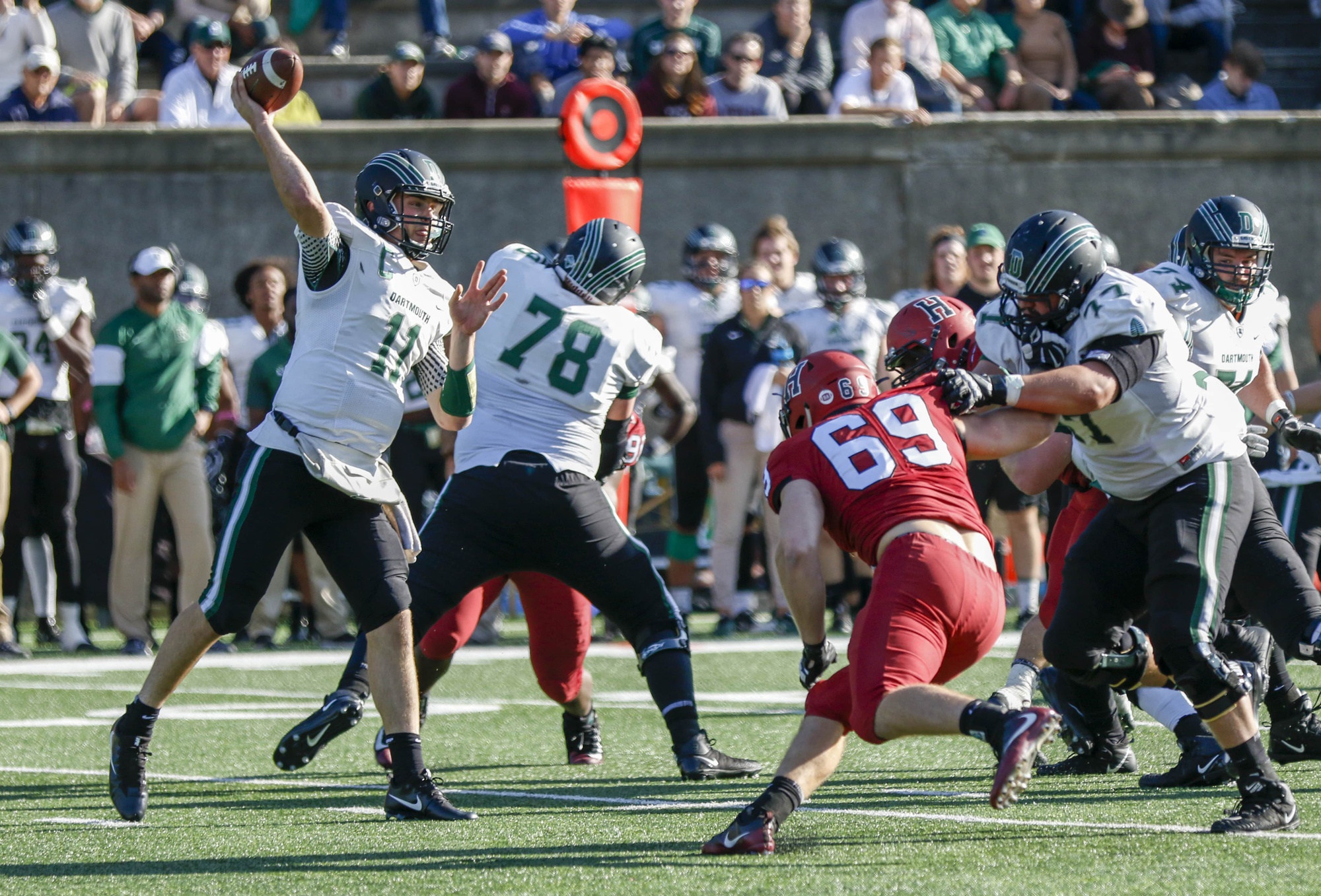 Dartmouth quarterback Jack Heneghan rears back for a throw against the Crimson.
By Amir Mamdani, Contributing Writer

To say that that the 2017 Ivy League Football season has not gone according to plan would be an understatement. Many pundits picked Cornell and Columbia to finish in the bottom of the league, but four games into conference play, the Empire State colleges find themselves tied for first with Yale. Meanwhile, traditional powerhouses Harvard, Princeton, and Penn find themselves in the middle and bottom half of the standings. With three weeks remaining, and with no tiebreaker for league champions, the Ancient Eight football title race is wide open, with seven of the eight teams still in contention.

Unfortunately for the Bears, their 0-4 league record has eliminated them from contention. But make no mistake—Brown still has an opportunity to have a say in the championship. With games against Yale in New Haven, Conn., Dartmouth at Fenway Park, and on the road at Columbia, the Bears can play spoiler down the stretch.

The Cinderella story of the 2017 season, Columbia is off to its hottest start since 1996. The Lions lost their first league game of the season against Yale on Saturday afternoon. This result narrowed Columbia’s margin of error as the team seeks its first league title since 1961, and only its second Ivy League championship. At 3-1, the Lions still control their own destiny, but huge matchups against Harvard and at Cornell loom ahead. Fortunately for the Lions, their final game of the season comes at home against cellar-dwelling Brown, giving Columbia arguably the most straightforward path to the championship.

After opening the season with a 49-24 loss at Yale, the Big Red rebounded, winning games against heavily favored Harvard, and Brown. A game-winning field goal in the dying seconds of Saturday night’s tilt at Princeton lifted Cornell to a shocking 3-1 league record and a share of first place, one of the biggest surprises of the 2017 season. With a date against Columbia in Ithaca looming two weeks out, the Big Red has control of its own fate. Winning out would mean at least a shared Ancient Eight crown, the program’s first since 1990.

The Big Green opened the season with two nail-biting wins over Penn and Yale and appeared primed for a run at the hardware. Unfortunately for Dartmouth, one-possession losses to Columbia and at Harvard have left the team in the middle of the Ivy League pack at 2-2. Like Princeton, the Big Green will have to win out and hope for a Lions loss. However, with two of its three games at home, and the third on the road at Brown, Dartmouth remains in the hunt.

A 52-17 home loss against Princeton two weeks ago deflated title hopes for the Crimson, but a 25-22 comeback against Dartmouth kept Harvard in the race for a share of its fourth championship in five years. The Crimson has a must-win matchup Saturday in New York City against Columbia. A win against the upstart Lions, followed by a victory over Penn, would keep Harvard’s title hopes alive entering the final weekend of the season. If Cornell were to lose a game to the Big Green, the Quakers, or Columbia, the Crimson would ride into New Haven with an opportunity to beat Yale to earn a share of the championship.

Home losses against Dartmouth and Yale, combined with a heartbreaking overtime defeat at Columbia, have stacked the deck against the one-win Quakers. Penn’s bumpy start to 2017 contrasts with recent years, as the Quakers have shared the title in the last two seasons. Technically, Penn can still earn part of the crown, but that situation would involve some ridiculous events, most notably Brown winning out. More likely, the Quakers will have an opportunity to affect the race by playing spoiler against Princeton and Cornell at home and Harvard on the road.

Princeton’s 52-17 win at Harvard two weeks ago appeared to poise the Tigers for a run at the championship. Last Saturday night, however, a heartbreaking 29-28 loss at home against Cornell left Princeton at 2-2. The Tigers’ road to a share of the title would likely require a 3-0 finish against Penn, Yale, and Dartmouth, supplemented with a Columbia loss.

A 28-27 road loss at Dartmouth is all that separates the Bulldogs from a 4-0 record. However, the Bulldogs rose to the occasion last week, soundly beating previously undefeated Columbia. Tied atop the standings at 3-1, wins against Brown and Princeton would set up a Harvard-Yale game with serious implications. If Yale were to defeat the Crimson in the 134th edition of The Game, the Elis would then secure a piece of the title. Yale last earned a share in 2006.