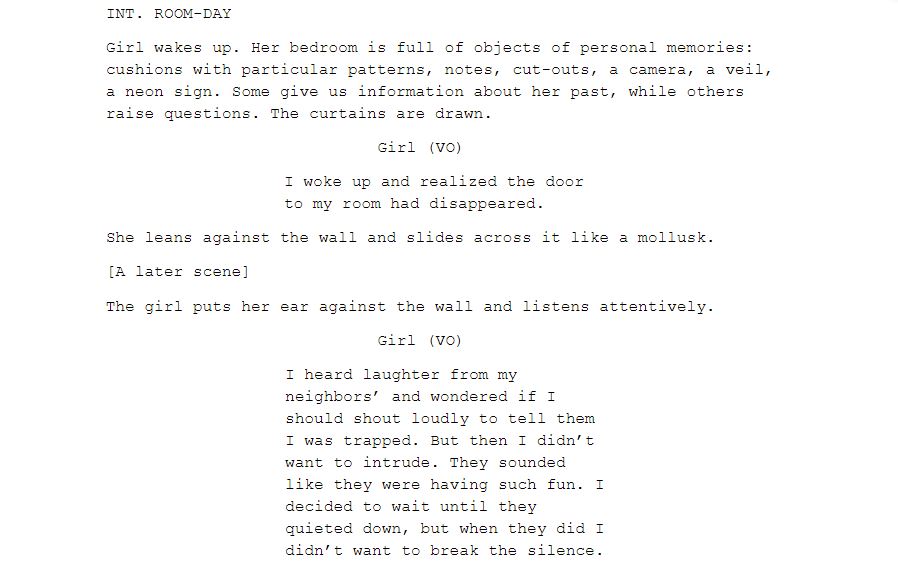 “Hey. I did some work on my screenplay. I was wondering if I could show it to you sometime,” I said.

“What about now? I’m eating sushi by myself.”

We met up at a café in the early afternoon.

“I like the script,” she said. “It’s very personal.” She skimmed through it again. “Maybe this could be an animation?”

I thought for a moment. “I didn’t think of that, but maybe it makes sense. The end might work well as an animation.”

“She looks outside the window, and imagines that if she jumps, she will be able to fly across the city. Then she realizes it is only an illusion and rejects the temptation to commit suicide. At that moment her bedroom door reappears and opens, and all the people she loves are outside clapping for her.”

“That’s a nice ending,” Kwan Yin said. “I think it’s the middle part that’s going to be hard. It can get too self-pitying and become a ‘look at me, I’m so sad’ story. It’s good to start with sentimentality, but then you need to transcend it, not indulge in it, if that makes sense.”

“For sure,” I said. I repeated her words in my mind.

“But it’s good. I’m always jealous of you young people who devote their lives to a single vision. I’m just drifting around. I’m interested in a lot of things, but I don’t have a passion.”

“What are some things you are interested in?” I said. I wanted to change the topic and stop talking about myself.

“Well, I did venture capitalism for quite a while. I’m very into charity work. I also thought for a moment that I could be a good museum curator.” She made quotation marks with her hands. “In your ‘art world.’”

“You said you’re jealous of people like me, but I am constantly jealous of people like you,” I said half-jokingly. “Entrepreneurs, NGO staff, or even dishonest politicians. These are people who live their lives to achieve some kind of goal. They use their time and energy to make an impact on the world. Me, I’m still struggling with the mere act of living.”

“They probably know less about life than you do,” she immediately dismissed me. “They just don’t think about it.”

We took a walk to a rock beach. There was a natural jetty jutting out into the ocean, breaking the waves into clouds of white spray. As we walked down it, I held her hand, but when we sat down at the end, she pulled hers away from mine. It was a windy day, and there was fog over the Pacific. We talked for a while, but then reached an unspoken understanding that we both preferred silence. I laid down and looked at her profile. She put some hair into her mouth.

“Go to this barbecue party with me tonight,” she said after a while, as if she were thinking out loud. “I’m not close with any of the people.”

When we left the beach I opened my mouth to say something, but then decided I should not. She noticed and asked me what it was.

“You were manipulating me,” I said. “You told me to come to the barbecue with you because you don’t know the people, but you seem to be very comfortable with strangers. You only said that so that I would think you needed me, and I would grow more attached,” I said finally.

“You doubt yourself too much,” she said calmly but resolutely. “Everybody has these doubts, but you give them too much credence. I have fear and confusion in my life too.”

The bus arrived just as she finished the sentence. She never said anything more.

—Staff writer Tianxing V. Lan's column, "3AM Cinema Club," is a serialized work of fiction set in Hong Kong which follows the protagonist as he works to write a screenplay.