AROUND THE IVIES: Columnist Wonders Why Drake Stopped Calling Him On His Cell Phone 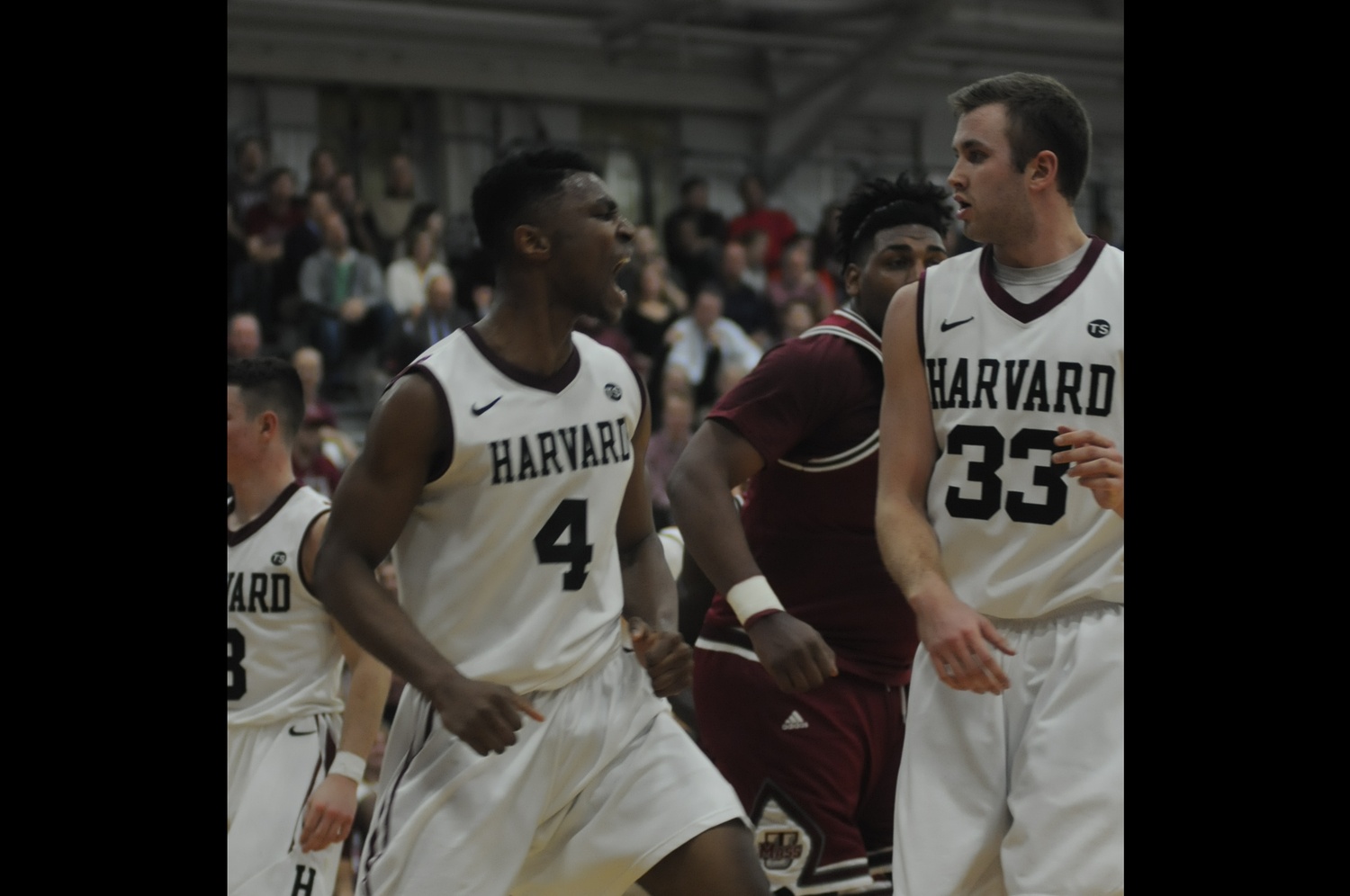 Junior forward Zena Edosomwan and the Crimson look to regain their footing in the Ancient Eight's 14 Game Tournament against Columbia and Cornell. By Eliza R. Pugh
By David Freed, Crimson Staff Writer

Last we parted, dear Around the Ivies reader, Harvard was on the edge of becoming the first school to win three straight first-round games as a double-digit seed in the NCAA Tournament. A week after winning a scintillating playoff in Philadelphia, the Crimson played their best game of the year in a dogfight against North Carolina.

A year away has turned the five-time defending champion into the hunted and not the Ivy favorite—a title shared by school rivals Princeton and Yale. For the second straight year, Harvard followed up a shaky Ivy opener against Dartmouth with a dispiriting loss to the Big Green, playing arguably its worst contest of the New Year in the defeat in Hanover. Valuable rotation pieces like captain Evan Cummins and freshmen Tommy McCarthy and Corey Johnson, who all starred at times during an up-and-down nonconference season, combined for just four points in the defeat.

The Crimson come into the league’s first weekend looking at a unique uphill climb. While Harvard lost its second game to Dartmouth a year ago, it had the reigning Ivy League Player of the Year and an experienced senior class that didn’t know the feeling of watching the NCAA tournament from home. While the experience narrative has been overstated this year—of Harvard’s core seven rotation players, just two are underclassmen—the Crimson are certainly greener than they have been since 2012.

Losing Siyani Chambers ’16 before the season to an ACL injury took a bad situation and made it more difficult—while freshman Tommy McCarthy has provided a reasonable Chambers facsimile on the offensive end, he doesn’t have the same polish as the three-year starter. The development of junior Zena Edosomwan has anchored a resurgent offense, but the streaky Crimson remain dependent on avoiding turnovers.

Adding to the challenge is the rise of the rest: with Harvard taking a step back, arguably five other programs took a step forward. Cornell and Penn have played mediocre basketball so far, a substantial improvement over past performance. Columbia gets senior Alex Rosenberg back from offseason injury to pair with star point guard Maodo Lo, headlining arguably Kyle Smith’s best squad in Morningside Heights. Yale sophomore Makai Mason—last seen absorbing a brutal blow to the head in the playoff—leads a resurgent Yale team that played Duke close for a half and surrounds reigning ILPOY Justin Sears with shooting and scoring at every position. Princeton’s cadre of excellent wings makes the wily Tigers a popular Ivy League dark-horse pick.

Amidst all of this upheaval, the first couple weekends of Ivy play will serve to separate the wheat from the chaff. Harvard has two eminently winnable games (at Penn, vs. Cornell) sandwiched around two of its toughest games of the season (vs. Columbia, at Princeton). Just two years ago, the Crimson lit the rest of the league on fire after a sluggish Florida Atlantic loss with a fury Kanye West’s Twitter account would be proud of. If it can channel that same desperation, a team that took Oklahoma and Kansas to the wire has the potential to catch lightning in a bottle and make an unlikely run to the title.

Without further ado, on to the action.

Casual fans looking to get informed about this matchup have a tough task ahead. The Princeton student paper has published just two articles about the Tigers since school ended, neglecting even to recap the Tigers’ tough loss to No. 7/8 Maryland. The Brown Daily Herald has seen Princeton’s three-bet and pushed its chips to the center of the table, with a blanket no-sports policy going back to December 4th. In the school year that has seen a former national champion paper go Tumblr-only for three weeks, this stunning tour de force in inertia takes the cake.

I must say, Howard, these young chaps must study quite hard.

Coming into the game on a rare one-game winning streak over Harvard, Cornell should have a chance to take over early behind its aggressive defensive play. The Big Red force turnovers in bunches, a bad matchup for a Crimson team that delivers them en masse.

Yet, it’s essentially a must-win early for the Crimson. Although Yale and Princeton tangle at Payne Whitney the following night, a defeat would put the Crimson two losses back of the league leader with Chairman Maodo coming to town.

What was an interestingly close game a year ago got even saltier a couple of weeks ago, when The Daily Pennsylvanian’s gossip column ran a piece about the rebirth of the masked bandit who leaves his feces strewn around campus. It’s said that all public crimes draw amateurs as imitators, yet until now the Poopetrator hadn’t drawn a public following. How’s that for dirty laundry.

In true Philadelphia spirit, the Pheces Phanatic hasn’t dealt well with the press. Called out by a fellow student, this fiend made sure that his fellow Quaker opened the door the following morning to a surprise Al Pacino might affectionately call “his little friend”.

I’ll watch my step this weekend.

I’d be remiss not to take a moment to honor the Columbia men’s football team. While it may appear presumptuous, and yes—even a tad holier-than-thou—to heap praise on a 2-8 football team, I note that prior to this season, Columbia had not scored a point on Harvard during Barack Obama’s second term.

In the depths of their despair, students the local paper theorized fascist campus administrators had begun using the team to artificially depress campus morale. It’s hard to feel so bad, however, when Columbia parents are notoriously careful to hire nannies to comfort their children through the rigors of college. As they say: there’s no disappointment on the football field a bedtime story can’t fix.

When Penn and Princeton ruled the Ivy League, the Killer P’s coming to town almost meant two schedule losses. Playing the league’s second-best team a night after playing its best drained teams and killed seasons; the back-to-back nature of the 14-Game Tournament only exacerbating the pain.

In a newly balanced conference, an interesting paradigm has emerged: each of the league’s four best teams travels with a lesser partner. How this will affect Saturday play, and whether we will see more upsets by lesser teams, is to be determined. However, on nights when the Ivy League can throw out two of its best matchups during prime time, fans can simply rejoice.

The League’s biannual Color War caps an interesting opening stretch for Dartmouth, which has an eminently sweep-able weekend at home against the Gentlemen’s C’s. With freshman Evan Boudreaux putting up All-Ivy numbers, the Big Green had a good look at sweeping Harvard in its first two contests. Dartmouth went 4-3 in the league last year at home, with all three losses by less than 10. Before playing at Jadwin, it gets Penn next weekend—as favorable of a three-game set as you get in the Ivies.

I’ll say this: taking your significant other to this game is a relationship white flag on the order of making Funyuns your one-year anniversary present.

Perhaps no team resents Harvard as much as Columbia. While Princeton and Yale have been the biggest challengers to Harvard during its five-year championship run, they’ve done so with varying measures of success. Yale was within a couple possessions of beating Harvard all three times last year and appears to be the only Ivy League team to be fully comfortable in Lavietes arena. Princeton was the last team to win the league and, until recently, could boast a quarter-century winning streak on its Northern rival.

Columbia? The Crimson has repeatedly torn the hearts out of Lions fans. The Lions shocked Harvard three years ago at home and had the Crimson on the ropes again a year later before a phantom call on senior Alex Rosenberg in the second overtime spurred Harvard to an 88-84 double-overtime win that changed the league narrative. The league’s trendiest early-season title pick coming into last year, Columbia lost Rosenberg to injury before the year started. Lo put the team on his back for long stretches of the season, but to no avail. After tearing Harvard up for 22 points in the first meeting—when a buzzer-beater from Chambers thwarted a frantic Lions rally—Lo had an empty 33 in the second as an angry Harvard team ran Columbia off their home floor in a game that wasn’t as close as the final 10-point margin made it seem.

The Lions have a good chance to come into this game 3-0 with Rosenberg and Lo healthy together for the first time. They’ve seen pundits anoint Princeton, Yale, and—at times—Harvard the best team in the Ivies, and they will savor their shot to make a statement on Harvard’s home floor.