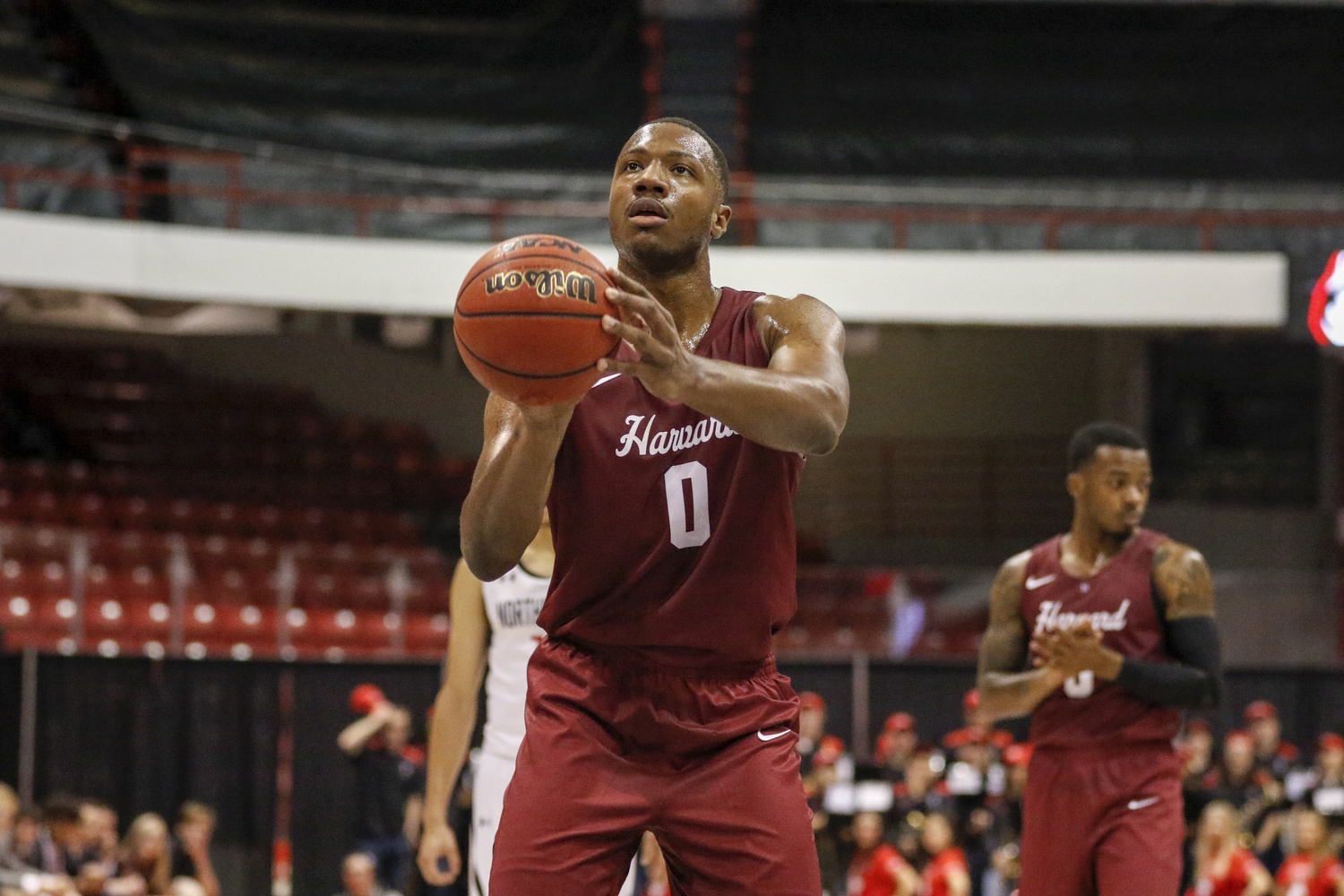 The Crimson finished 1-2 in the Orlando Invitational, with losses to No. 5 Maryland and USC. By Timothy R. O'Meara
By Henry Zhu, Crimson Staff Writer

The three-game Thanksgiving tournament in Orlando ended with a thud on Sunday night, as the Crimson languished to a 77-62 blowout loss to USC. Harvard scored just 19 points in a second half that was excruciatingly difficult to watch, outside of a few energetic concluding minutes from bench players hungry to send a message including Mason Forbes and Luka Sakota.

The Crimson fought back from what Coach Amaker characterized postgame as a “horrendous start” to momentarily take a 39-38 lead, but it upped its opponents for only the following 31 seconds before the Trojans broke away. Led by standout rookie Onyeka Okongwu’s dominant 27 points on the interior and four triples from familiar nemesis Quinton Adlesh (who nearly spoiled Harvard’s Ivy championship last season in his last shot as a Columbia senior), the Trojans were simply a team with more weapons and athleticism on both ends of the court.

In some ways, this game was a good metaphor of the Crimson’s performance in the tournament as a whole. In all three of its games (Texas A&M, No. 5 Maryland, USC), the Crimson put together stretches of brilliant team basketball against opponents with imposing physical size — the ball moved swiftly from side-to-side, kickouts were made to confident three-point shooters like Rio Haskett (who currently holds an impressive 48.3 percent clip from deep), Rob Baker, and Danilo Djuricic, and opportunities for individual prowess from X factors Noah Kirkwood, Chris Ledlum, and of course Bryce Aiken were plentiful due to strong floor spacing.

If all else failed, there was also the post-up play of Chris Lewis to rely on or Bryce hitting one of his signature deep, deep triples to put points on the board.

It was in these spurts — some longer than others — where the strong veteran cohesiveness and individual talents on the Crimson roster fully shone through to a national audience. Just take those initial 15 minutes against the Terps when Harvard led by as much as 11 as proof of the fact that the Crimson can play up against any team in this country, if not already evident.

But then there are the reminders that this team is still very much a work in progress and one that is trying to put all the puzzle pieces together. In frustrating stretches like the second half of the Trojans contest in which Harvard shot 26% from the field, the need for someone to hold a leaking ship steady and stifle the opponent’s streaky scorer, whether that be USC’s Okongwu or Maryland’s Anthony Cowan Jr., became ever so evident.

The tide felt like it turned in both of those games right around halftime, which either points to a better team playing up to par or a still-growing Harvard team trying to find a more consistent ‘counterpunch’. Especially with Seth Towns still sidelined, this team very much needs someone not named Bryce Aiken to shine through in times of adversity and be a more stable second and third option.

Of course, both losses this weekend were against teams that will likely send their star big (Terps’ Jalen Smith and USC’s Okongwu) to the NBA, in addition to wielding complementary frontcourt pieces that gave Harvard headaches on both ends of the court. Amaker experimented with various combinations of Lewis/Baker/Djuricic/Forbes/Welsh to match up against their athletic foes, but acknowledged following both games that those players were “too much for us”.

If Harvard is unlikely to see that type of interior talent in the Ivy League, this weekend at least was fruitful in providing a competitive environment to go head-to-head with some of the best bigs college basketball had to offer. For a program that typically schedules two or at-most three Power Five teams per season, this tournament offered a platform with not only the television eyeballs but the postseason-like feeling of a back-to-back, high-gear atmosphere even sunny Orlando on break cannot diminish. Plus there are the little things, such as having an abbreviated 25-minute warmup and a raucously hostile environment (against Maryland) that may come in handy come March.

The Crimson do not come back to Boston with three wins, but in some ways have achieved a consolatory alternative: examples on the court to show it can compete toe-to-toe with brand-name Power Five schools, and ample evidence that more work needs to be done to tie its talented pieces together into a dangerous force come Ivy League play.

Its next test, against a massively-improved UMass team on Saturday, will be an important opportunity to continue what it has built in Orlando. If the adrenaline rush of playing a nationally-ranked team this weekend wasn’t enough, the intensity of this in-state rivalry should surely suffice.