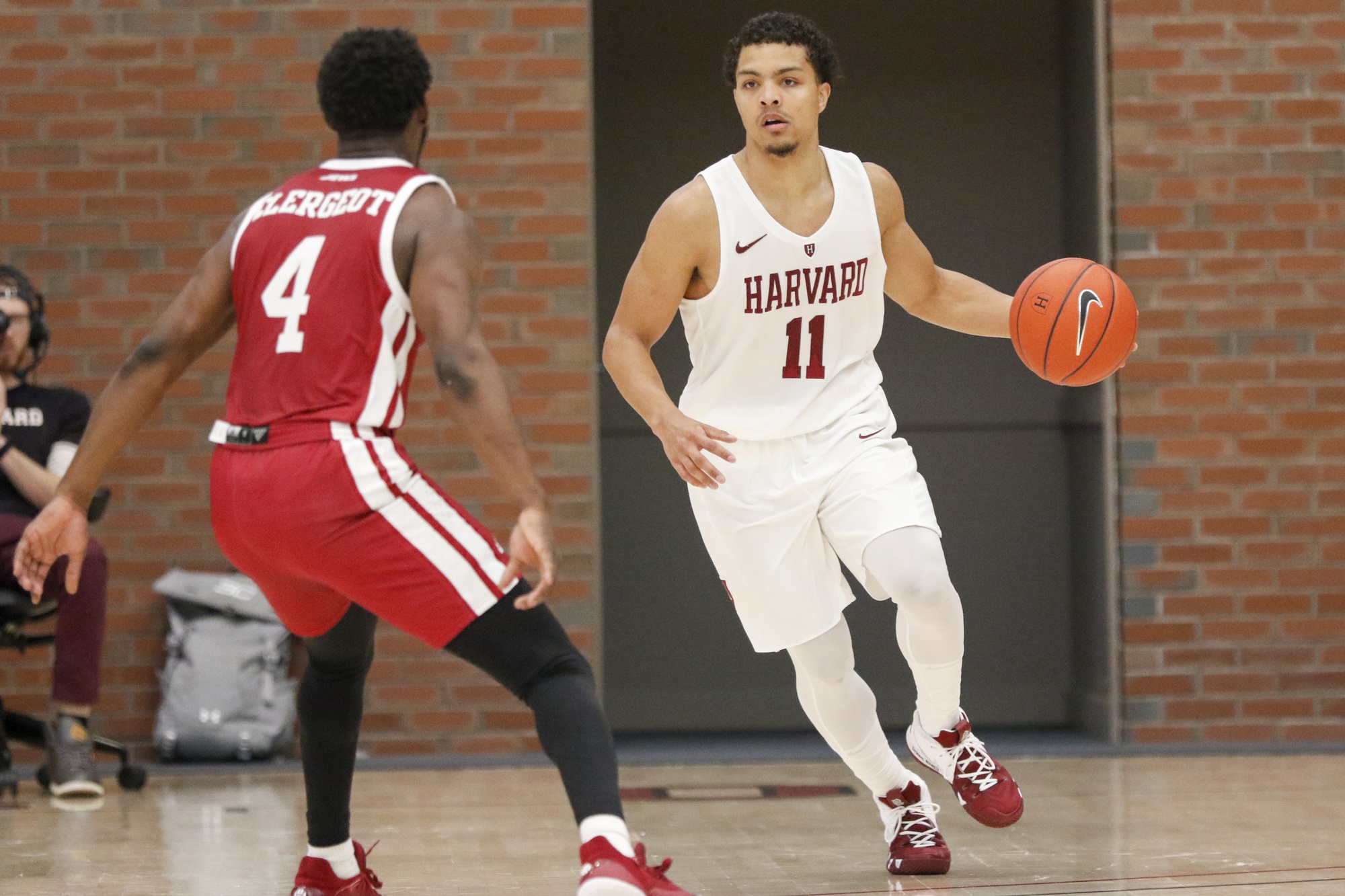 Amir Mamdani takes a look at every game in the Ivy League this weekend as the Crimson will return home and look to make up ground in the standings. By Timothy R. O'Meara
By Amir Mamdani, Crimson Staff Writer

This game has major implications for Ivy League standings. Brown and Penn enter the contest both at 4-2 in Ancient Eight play, so something will have to give. Brown is flying high after a 2-0 home weekend, including a dramatic last-second defeat over Harvard, but the team will travel to Philly to take on a Quakers squad that has won four straight Ivy League games after dropping both contests to local rival Princeton.

Ultimately, the Bears have served as Ivy League darlings thus far, but this weekend is where I see that run of play coming to a close. Brown is led by Brandon Anderson, but I forecast Penn’s Devon Goodman locking him down and outplaying the guard position, and I can’t really see anyone on Brown shutting down AJ Brodeur on the Palestra court. I like Penn here, to advance to 5-2 on its home floor.

This is a matchup between the two top teams in the Ivy League right now, as both the Bulldogs and Tigers enter Friday’s action at 5-1 in conference play. Mitch Henderson’s Princeton team has exceeded expectations thus far, and has only lost to Cornell on the road, effectively defending home court to a 3-0 tune. But Yale has been just as formidable on the road, and advanced statistics still place them within the top 50 teams in the country.

It’s a crucial game, that’ll be televised on ESPN News accordingly, but I’m taking the road Bulldogs despite the fact that they’ll probably be favored. Yale is in the top 15 in effective field goal percentage, both on the offensive side and defensive side, and I like its talent and James Jones’ ability to create favorable matchups for playmakers Azar Swain, Paul Atkinson, and Jordan Bruner. Too much talent to go against the Bulldogs, and I think this is the contest when Princeton and its hot shooting from beyond the arc come back down to earth.

This is a tough game to pick, as both sides have struggled mightily this season. Columbia and Dartmouth might already be out of Ivy Tournament contention, as the Lions are 1-5 while the Big Green are winless in six Ivy contests. Dartmouth isn’t as bad as its record, but the Big Green haven’t beaten a team ranked in the top 300 since November, which is as dark as it gets in the Ancient Eight.

That being said, home court does wonders in the Ivy League, and it’s hard to pick against the Big Green when it’s matched up against an unconvincing Columbia team. However, KenPom has Dartmouth laying six points, and that’s simply too many in a contest like this. Columbia has kept things close recently, losing to far more talented Princeton and Penn squads by single digits this past weekend, and I think they’ll come in playing with desperation. If the spread really does end up being this wide (which would surprise me), I’m taking the points.

The Pick: Columbia +6 (I would take Columbia until +2.5 at which point I’d flip to Dartmouth).

Finally! Harvard men’s basketball has a home game! The Crimson hasn’t seen the friendly confines of Lavietes Pavilion since January 18th, and oh what a welcome sight a trip from the New York schools should be for a Harvard team absolutely desperate for a 2-0 weekend. Currently at 3-3, the Crimson is on the outside looking in, taking on a Cornell team that finds itself at 2-4 after a surprise home win over Princeton.

Harvard fans will remember last year’s solo virtuoso performance by Matt Morgan, helping the Big Green to a shocking victory across the Charles River. Morgan has since graduated, and with his departure surely must go all hopes of a Big Red upset. That being said, I forecast the spread being too generous in Harvard’s favor—KenPom currently has it at 13 points. The Crimson has played a remarkable number of consecutive games decided by single digits (with the last four coming down to the last possession). However, I think this is the time for a statement game, so I’m taking Harvard to control Cornell and thrust the Crimson back into the playoff hunt.

The Pick: Harvard -11 (anything more and I would take Cornell + the points).

Everyone knows that the second night of an Ivy League back-to-back means absolutely anything can happen. But the Penn-Princeton trip is, by all intents and purposes, the most difficult road trip one can make in the Ivy League season, especially coming all the way from Providence. I think this is the weekend when Brown’s Cinderella season comes crashing down to an 0-2 road trip reality.

I like Princeton to rebound (from presumably losing to Yale the prior night), to salvage a 1-1 weekend at Jadwin Gymnasium. I think Richmond Aririguzoh will feast on Brown’s undersized big men, and Ethan Wright, Drew Friberg, and Jose Morales can exploit weak Bears’ perimeter defense to make it rain from three-point range. Brown Coach Mike Miller will rely heavily on Brandon Anderson and Tamenang Choh, but ultimately the Tigers should be too much to handle on the second half of an unenviable back-to-back for the Bears.

This is the marquee contest of this weekend’s slate of games, and the Palestra should be absolutely jumping on a Saturday night. After dispatching Brown the night before to boost its Ivy winning streak to five games, Penn should be brimming with confidence and primed to take on the cream of the Ivy League.

Yale is a team that leads the conference in offensive and defensive efficiency, but it’ll still be its second game in as many nights, and it's hard to pick against the home team. Factor in the fact that KenPom has Penn getting as many as four or five points right now, and I’m tempted to take the Quakers. I’m not sure who will win outright, but I see this one coming down to the final possession or two, as we’re more than familiar with on Ivy League Saturdays. For that reason, I’m taking the home team and the points.

Oof what a snoozer. If Yale-Penn is the handsome big brother of the weekend, Cornell at Dartmouth is the problem child that your parents keep hidden away from the rest of the family. The Big Red should be smarting from a beatdown at the hands of Harvard, and who knows if Dartmouth will have finally gotten off of the schneid or if the squad will be 0-7 at the hands of Columbia.

In any event, a trip from the New York schools is the remedy that a winless Big Green should need to finally find some success. For all of its deficiencies, Dartmouth is a top team at limiting second-chance points, and enough one-and-done Cornell possessions should lead to success for the hosts. If the spread gets too out of control, take the points, but anything at five or fewer and I’m going to take Dartmouth on the second night of its homestand.

Who remembers Columbia-Harvard last year? Three Overtimes, a SportsCenter Top 10 play for Bryce Aiken, and a dramatic win. Things are a little different this year. Aiken is out indefinitely, and the Crimson isn’t flying quite so high, but they should have enough firepower to take out the Lions.

This one will come down to just how many points that spread will be at, as KenPom currently has it at 14. Assuming it is that high, I’m going to have to take the points, with the knowledge that Harvard men’s basketball has some cruel, twisted, stressful obsession with close games. That being said, I feel obligated to confess I can’t see anything other than a 2-0 weekend for the Crimson in my crystal ball, I just don’t know if they can cover whatever inflated spread Vegas has in store.

Disclaimer: All picks are made based on Kenpom predicted lines, since official spreads are yet to be released.