Annenberg Must Cater to All 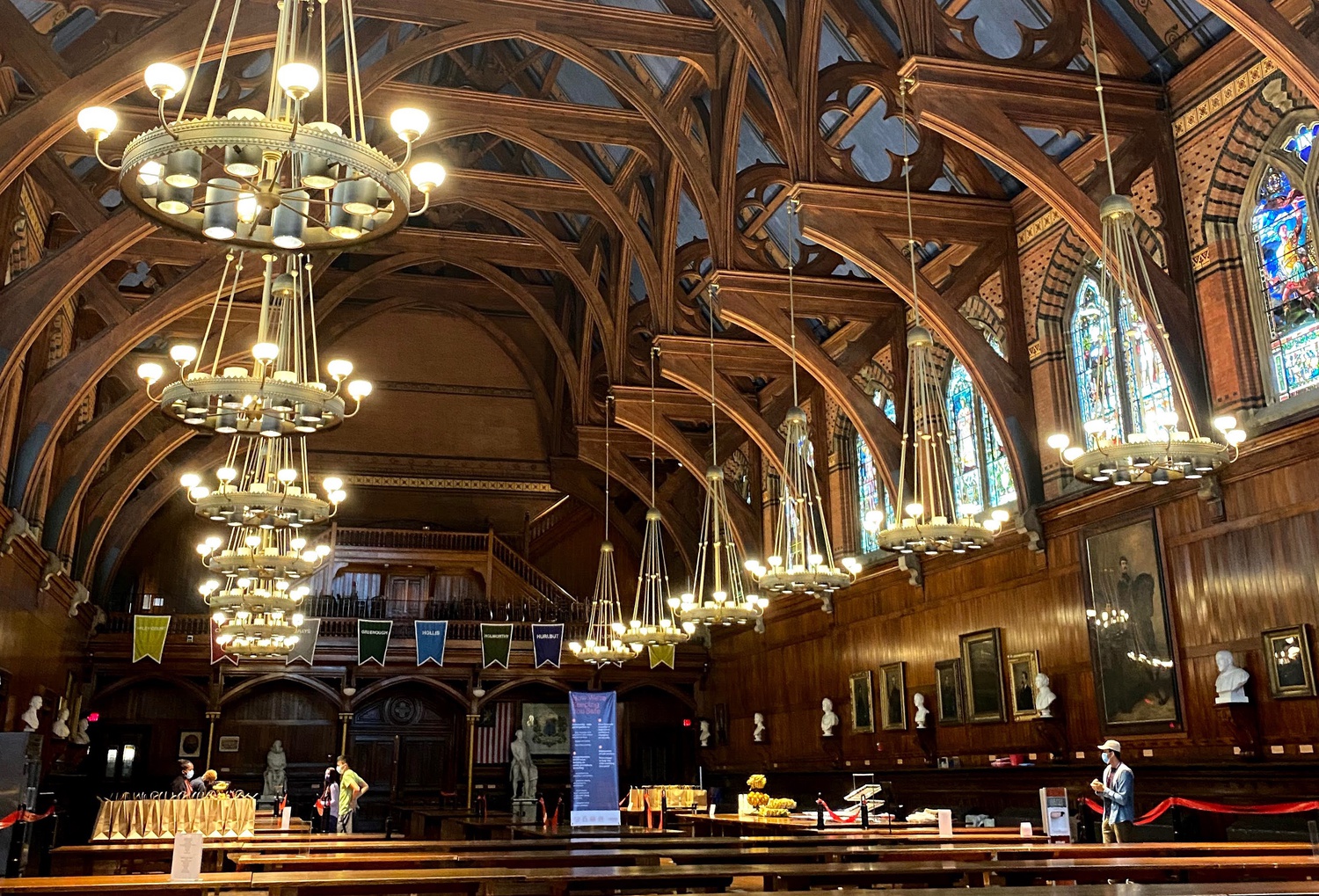 Walking into Annenberg for the first time transports you. Enveloped by exquisite stained glass and with the eyes of Shakespeare and Dante piercing down at you, the grandeur often associated with Harvard becomes unmistakably palpable. Originally conceived as a way to honor the Harvard graduates who fought for the Union in the Civil War, Annenberg became the freshman dining hall in 1994, serving about 3,400 meals a day as of 2009.

The freshman experience is forged in Annenberg, where students fresh from high school graduation share meals with their peers, forming bonds that span the duration of their time at Harvard. My class, the Class of 2024, missed out on this significant experience, having instead to contend with grab-and-go bagged meals during our first year on campus. Thankfully, Annenberg is now back to normal capacity and function for the Class of 2025 (and all other classes for breakfast only).

Though grabbing a meal at Annenberg is a mundane action in terms of the Harvard experience, the ordinary event of eating in the freshman dining hall is contrasted by the magnificent architecture of the building itself. This juxtaposition is a bit jarring, only adding to the character of Annenberg.

It’s already overwhelming to be a freshman at Harvard; eating in a dining hall frequently compared to Hogwarts only compounds this. As Matthew Nekritz ’25 described in an interview about Annenberg, “It’s the most beautiful place I’ve probably ever eaten. I mean, it’s just crazy how pretty it is.” Nekritz discussed how “you walk in and there’s always so many students in there and there’s just a very, very good energy of meeting people and talking, especially the first week of school.”

Food intrinsically connects us, as eating together is a community-driven activity. Students forge new relationships over meals, sometimes seeking shelter in company or in hot soup during the frigid Boston winter. We bring to the table fond memories of our own family dinners, cultural heritage passed down through hands assembling a dish or stirring a pot.

Because food has vital cultural and religious significance, many students have dietary needs specific to their cultural and religious beliefs. As Harvard is full of students from all corners of the globe with a multitude of backgrounds, it is important that this diversity is also reflected in equitable and easy access to food for students whose religion and culture necessitate adherence to certain diets. Many students belonging to different cultural communities have expressed dismay about the inability to access food that they are actually able to eat at Harvard.

For many students who keep Kosher, like Leah Baron ’25, finding a full meal in Annenberg can be a challenge. Baron explained to me that she has “only eaten in Annenberg for a meal once,” and that the Kosher options that Annenberg provides are “generally a little bit lacking, in the sense that there just really aren’t a lot of them.” Though Baron described breakfast as feasible to eat in Annenberg because there are options such as cereal, fruit, and yogurt, lunch and dinner are more of a challenge. She told me how Annenberg only offers “a couple of frozen meals, like American cheese and sliced deli meats and frozen pizza bagels” for people who keep Kosher — which don’t really constitute a whole, fulfilling meal.

Devangana Rana ’25, who is a vegetarian, also described to me how the options available to her are not fulfilling: “I go for dinner around six, and I get hungry by like nine or eight-thirty.” She continued on to say that “the options for meals are sometimes limited,” and on some days they “just don’t look appealing.” Rana also added that a couple of her friends who eat a Halal diet “sometimes don’t find it very appealing either.”

As Fahim Ahmed ’25, who tries to maintain a Halal diet, told me that “there have been occasions where there’s very limited options there, sometimes there isn’t even any Halal meat options, and I think that makes it kind of difficult to stick to trying to eat Halal.” Ahmed contends however that for the most part, “they’ve been pretty decent about it.”

If food connects us, then difficulty in accessing food has the potential to disconnect us. Moreover, students should get what they pay for — Harvard requires all students to be on the same dining plan, but students who are forced to find meals elsewhere in places not covered by the meal plan are simply not getting their money’s worth.

The foundational experience of eating in Annenberg is bonding with peers over shared food. If students have issues accessing food that they can actually eat, then that chips away at the dining hall’s community-building function here at Harvard. Annenberg and all other dining halls must have fulfilling, adequate meal options for all students — including those with particular dietary needs.

Connecting with others over meals informs not only much of the Harvard experience, but much of the human experience. Everyone deserves to have nutritious and easily accessible food available to them, enabling them to better integrate into the communities they are a part of.