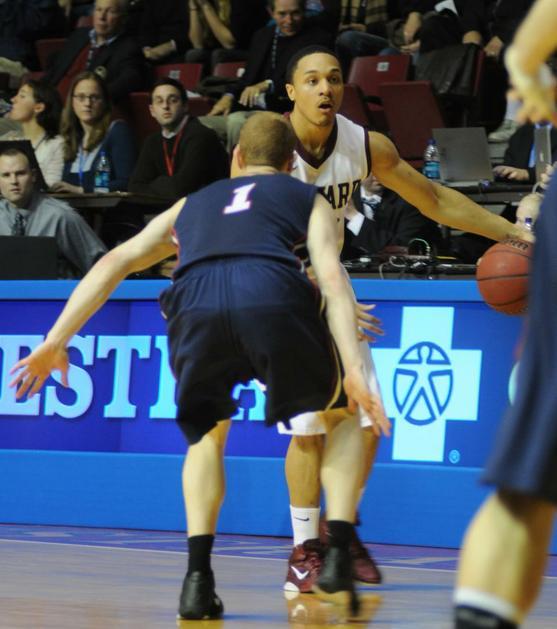 Sophomore Brandyn Curry, who has played all 22 games this year, is a key component of the team looking for its first ever Ivy League Championship.
By Scott A. Sherman, Crimson Staff Writer

It’s the midpoint of the Ivy League basketball season, which means that everyone has had the chance to play everybody else. We’ve seen some great games, some surprising upsets, and we’re down to two contenders for the title in Princeton and Harvard.

The main thing I’ve learned from watching every team play thus far is that the league is significantly more competitive top-to-bottom than in years past. There have been more close games and fewer blowouts, and the Tigers and Crimson have both respectively had some trouble with league bottom-feeders Cornell and Dartmouth.

There are also a lot more good players, but fewer great players, in the conference this season. Last year, the Ancient Eight was star-heavy, highlighted by Cornell’s Big Three, the Crimson’s Jeremy Lin ’10, Yale’s Alex Zampier, and Brown’s Matt Mullery, all of whom dominated their teams’ offenses. This year, the scoring is more balanced on nearly every squad, and because there are more good offensive players, the games have been more competitive.

There’s the Tigers, for example, whose four leading scorers are all within one point of one another. Harvard has six players who could easily lead the team in scoring on any given night.

Last season, five players averaged over 16.2 points a game; this year, no player has averaged that many. There’s no clear frontrunner for Ivy League Player of the Year or Rookie of the Year right now, both of which likely be determined by teams’ performances in the second half of their conference schedules.

Let’s take a look at what we’ve learned about each squad at the season’s midpoint. And with the Oscars right around the corner, let’s put the Ivy League scene in Hollywood terms.

Brown is “True Grit,” as each has one impressive rookie—Sean McGonagill for the Bears and Hailee Steinfeld on screen—being the major highlight of both.

Columbia is “127 Hours.” Both are centered around one key figure (James Franco in the film, Noruwa Agho on the court), but neither has enough supporting talent to push it to that next level.

Cornell is “Black Swan.” Chris Wroblewski and Natalie Portman provide the star power, and Errick Peck and Mila Kunis are solid in supporting roles. In both, a new coach is trying to continue the successes of the past few seasons, but unfortunately for Thomas Leroy and Bill Courtney, the plot of each story is based around the new talent not being as good as its predecessor.

Dartmouth is “Toy Story 3.” Both team and movie involve college students playing as if they were little kids.

Penn is “Inception.” Filled with stars, but mind-bogglingly confusing. The Quakers arguably have the most talent in the conference and a quartet of Zach Rosen, Jack Eggleston, Tyler Bernadini, and Miles Cartwright that's probably the best in the league, but they’re also by far the most inconsistent team. To play the way they did against Harvard and Princeton—two games they should have won in overtime—and then to lose at Cornell and Columbia the following weekend makes absolutely no sense.

Princeton is “The Fighter.” With four go-to performers (Ian Hummer, Kareem Maddox, Dan Mavraides, and Doug Davis on the court, or Mark Wahlberg, Christian Bale, Melissa Leo, and Amy Adams in the film), the Tigers—like Mickey Ward—won’t blow you away, but they’ll hang with you just long enough to pull out the win in the end.  They're the best team in the conference right now, just like “The Fighter” was, in my opinion, the best picture of the year.

Yale is “The King’s Speech.” Both feature one star (Greg Mangano for the Bulldogs, and Colin Firth for the Britons) and came out of nowhere in terms of pundits’ preseason predictions to become solid competitors.

It’s too bad for Yale that Michael Sands left the team before the start of the season; pairing him with Mangano in the frontcourt with Austin Morgan and Porter Braswell in the backcourt would probably have had the Bulldogs up there with the Tigers and Crimson right now—the team’s size would have been tough to beat.

Finally, of course, there’s Harvard, which is “The Social Network,” and not for the obvious reasons. Both may not win the title this year, but highlighted by young talent, they will probably be the story people talk most about in years to come.

In both cases, the team stayed strong after losing one of its key components—Eduardo Saverin and Lin. Harvard isn’t blowing out teams at home like it did last year, but that’s likely because its opponents have gotten better. So as strange as it seems that the Crimson could improve after losing one of the best players in franchise history, the improvement of co-captain Keith Wright and the addition of freshman Laurent Rivard may have helped it do just that.

Wright has developed from a guy who would merely hit his open lay-ups when Lin was double-teamed into a player with consistent post moves and a reliable outside jumper. Rivard, meanwhile, has singlehandedly brought the team back into two games it would have otherwise had no business being in—at Michigan and at Princeton—with his eye-opening three-ball ability.

As good as Lin was, the offense at times tended to revolve around him too much last year. This season, the ball movement has been much better in Tommy Amaker’s more balanced inside-out scheme.

No matter what happens this season, with no seniors and the Ivy’s best recruiting class by a mile, the Crimson–which is probably a Kyle Casey injury away from being 20-2 right now–should be the best team in the conference for years to come.

With a veteran backcourt in will-be senior Oliver McNally and will-be junior Brandyn Curry, an interior post threat in Wright, and great shooters in Rivard and Christian Webster, the team will have all the components you look for in a team capable of making a Cornell-esque tournament run next year.

But let’s not get too far ahead of ourselves. We’ll gladly take the Golden Globe for now.