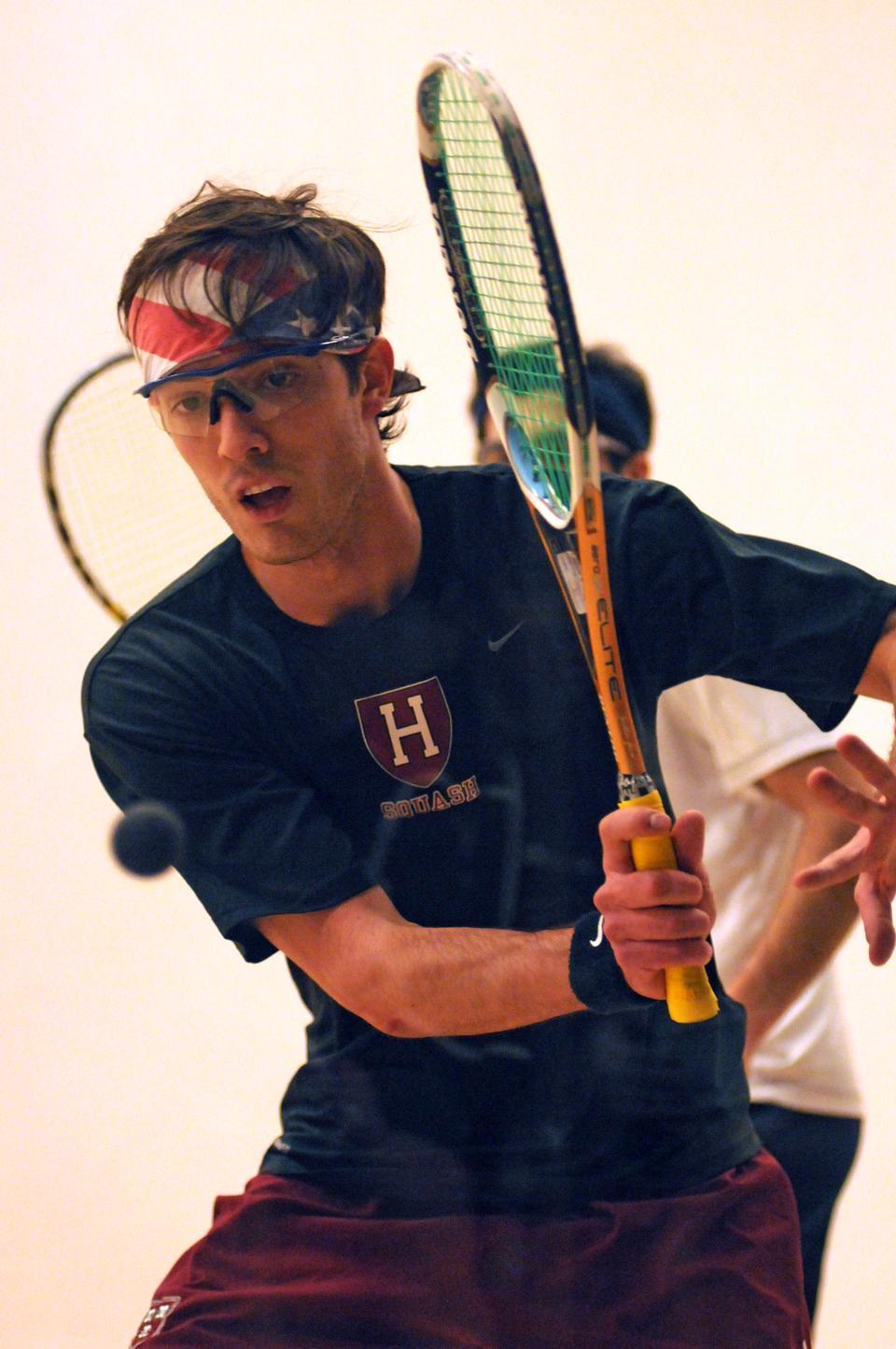 In the final team match of his collegiate career, Harvard captain Reed Endresen led his team to a win over Cornell. Endresen, playing No. 2 for the Crimson, defeated the Big Red’s Alex Domenick in five sets.
By Catherine E. Coppinger, Crimson Staff Writer

There are days when the Harvard fan base seems nonexistent or perhaps just busy in Lamont. But when the Collegiate Squash Association National Team Championships took over Barnaby Courts last weekend, Sunday was not one of them.

In hopes of seeing the Crimson men’s squash team take on Cornell in the fifth-place match of the Potter Cup, what I stumbled upon instead was the last individual match of the national finals, which promised to break No. 1 Trinity and No. 2 Yale from a 4-4 stalemate.

The energy surrounding this contest was infectious, the intensity tangible. A Trinity alum standing near me in the mob which spilled out of the seating area expressed the pressure on Bantams’ senior Chris Binnie most accurately. “I mean, no big deal, it’s only 13 years on the line,” he laughed.

Drawn in by the crowd, I tried to find a place to watch before the fifth-place match began. Those on the outskirts could barely glimpse an occasional racket or the top of a head, but each sighting, however small, was cause for great excitement. Toward the back of the courts, the match was being shown on a TV screen with almost as many bodies bundled around it.

I wedged myself into the stands for a less obstructed view of the action.

The crowd was on its feet, alternating between tense silence and raucous cheering. Because of the nature of the squash viewing area, the end of every point sounded the same, with Bulldog and Bantam supporters interwoven on the bleachers in tangled rivalry.

After Yale sophomore Richard Dodd closed the gap a bit, his Trinity counterpart hit one into the corner and out of reach. 10-7 Binnie. With the next point, the senior sealed the deal, and Barnaby Courts erupted. In one swift motion, Binnie turned to salute the crowd of alumni, friends, family, and foes with a single, triumphant fist pump.

It gave me goose bumps. The day’s history lesson was complete and, as fans, we were a part of it: Trinity had won its 13th straight national crown.

The response to the Bantams’ winning streak—currently 244 matches, making it the longest in collegiate sports history—was visibly polarizing on Sunday afternoon. When bystanders came from various consolation matches to check the score, the news was either met with rejoice or with a groan, but always with extreme emotion.

Several fans wore “Fear the Chicken” shirts, which seemed to dare you to laugh. But how could you, really, as the Trinity capped off yet another undefeated year? After the match, Bantams young and old celebrated as Trinity players donned hats embroidered simply with the number 13.

It isn’t often that we get to see the top eight teams in the nation in any sport battle on our campus, and all of this happened right in our backyard.

Perhaps because it was a home contest or perhaps for some other reason, the area surrounding the fifth place contest between Harvard and Cornell was nearly as packed as that of the title match.

In the back courts where Harvard’s match took place, there were no scoreboards visible, making it impossible to follow along unless you were keeping track of points in your head. Though annoying at times, this added to the cohesive atmosphere for fans, as complete immersion in the contest was necessary.

For the second time on Sunday, the crowd was electric. In what could have been the biggest moment of the day, captain Reed Endresen earned a five-game win at the No. 2 spot to lead the Crimson to an eventual 5-4 victory over the Big Red.

As the senior outlasted his opponent, a deep chant of “Reed-o, Reed-o!” began to fill the Murr Center. As the game’s final ball escaped the reach of Cornell junior Alex Domenick, the crowd erupted into cheers once again.

There was something special about the fans standing, both literally and metaphorically, behind their team. As I pondered this, a Trinity player in a euphoric delirium stumbled into me and almost knocked the trophy he was carrying to the floor. I quickly snapped out of my momentary reflection.

The Harvard team remained in the Murr Center’s glass court to celebrate long after the other teams had boarded their respective buses.

It is a rare day like this that makes me most proud to be a Crimson sports fan.