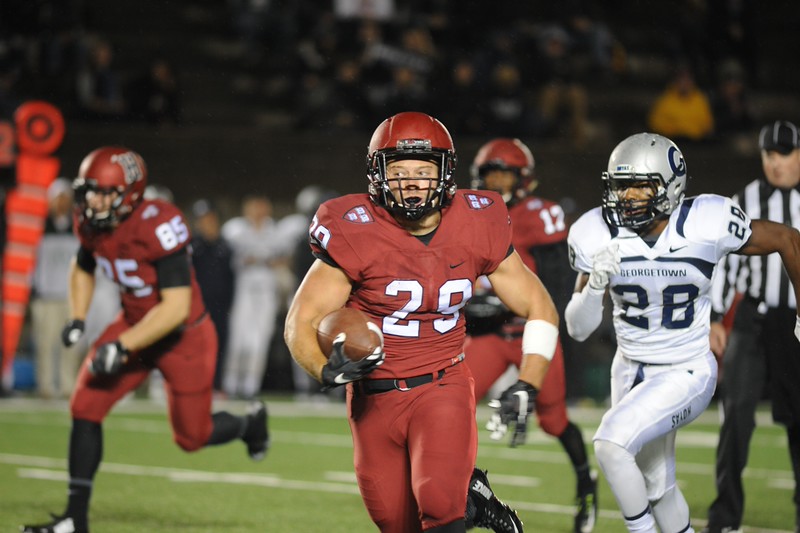 Senior running back Paul Stanton, shown on Oct. 2nd against Georgetown, had 113 yards and two touchdowns on fifteen carries in the contest. Harvard outscored the Hoyas by a score of 45-0. By Matthew W DeShaw
By David Steinbach, Crimson Staff Writer

“The bottom line is, the preseason’s over.”

So said Harvard coach Tim Murphy in his press conference last Friday night, after his team cruised to a 45-0 victory over visiting Georgetown. Six days earlier, the Crimson trounced a sloppy Brown squad in its Ivy League opener. The week before that, Harvard claimed a 31-point win over Rhode Island.

The Crimson football schedule is typically backloaded, meaning that the team has yet to face its toughest opponents. Those showdowns—Princeton, Dartmouth, Penn, Yale—will come later like a string of punches that must be absorbed, with little time to catch your breath.

Accordingly, the lopsided stat lines from these early games can be deceiving. No one thought that Rhode Island and Georgetown could hang with the explosive Harvard offense or wear down its staunch defense. A host of unforced errors doomed Brown to defeat seemingly just moments after the game began.

But if Murphy is right—that the “preseason” really is over—it’s as good a time as any to take stock of the 2015 Harvard football team.

What jumps out immediately is the high-powered offense centered around quarterback Scott Hosch. The senior may have guided Harvard to six wins last year, but there remained plenty of questions surrounding the position as late as preseason. After all, the team didn’t even name a starter until Hosch’s competitor went down with an injury in the days leading up to the opener.

But through three games, Hosch seems to exude a newfound confidence that likely results from a combination of game experience, skill development, and increased familiarity with the playbook.

Last week, with the pocket collapsing around him, Hosch assessed the situation, slipped through incoming defenders, and dashed nine yards for a first down. In 2014, the outcome of that play may have been a throw into traffic or a sack.

Another staple of the 2015 Crimson offense has been balance, especially in the aerial attack. No member of the Crimson has amassed more than 78 yards receiving in a game this season.

That’s not at all to say that the passing game has struggled. To the contrary, it’s a testament to Hosch relying on a host of targets to advance the ball downfield.

In the first contest of the year, five different receivers racked up at least 50 yards, and four different individuals caught touchdowns.

As of now, it’s been smooth sailing for the Crimson on offense. But here’s one factoid that may very well become relevant: Since 2010, only once has Harvard had a quarterback play a season from start to finish.

Indeed, the Crimson offense will at some point be thrown a wrench. Whatever they may be, new challenges and unexpected obstacles will arise. The success of the 2015 season may very well depend on how the team responds.

On the other side of the ball, the veteran Crimson defense may be even better than advertised. Last season, the Harvard defense surrendered an average of 11.7 points in its first three games. That unit went on to become the top-ranked scoring defense in the FCS.

This year, anchored by a senior linebacker corps headlined by captain Matt Koran, Harvard has allowed just 12.3 points per game. While such a stat is impressive in itself, it bears emphasizing that most of the 27 points Brown scored came against the Crimson’s second-string defense. Harvard’s performance thus far may be even more dominant than the numbers suggest.

Of course, caution is necessary here, too. The Crimson hasn’t yet faced an offense with the firepower that some Ivy opponents will feature. As is the case for the offense, the true tests for the defense are still to come.

So what can we say about the 2015 edition of Harvard football? The team seems to have performed as well as it could have in its opening trio of games. A lineup of able veterans is healthy and hungry.

But much remains to be seen.

Harvard has so far played clean football; it hasn’t lost a fumble or even allowed a sack. But the team hasn’t yet suited up in driving rain that nearly doomed Princeton against Columbia last weekend.

Likewise, the Crimson may have scored more than 40 points in each game so far. But it hasn’t faced a defense that can match up physically with its talented offensive line.

And Harvard certainly handled Rhode Island, Brown, and Georgetown with ease. But teams like Dartmouth, Yale, and Princeton present different challenges entirely. These opponents will come in motivated and prepared, ready to knock off the champs.

The preseason is over. Expect answers to many of these unresolved questions soon.­