Fish Will Fly Between Harvard Men's Hockey and Cornell

When the No. 9 Crimson and No. 14 Big Red go toe to toe Friday night, a 54-year tradition will take center stage 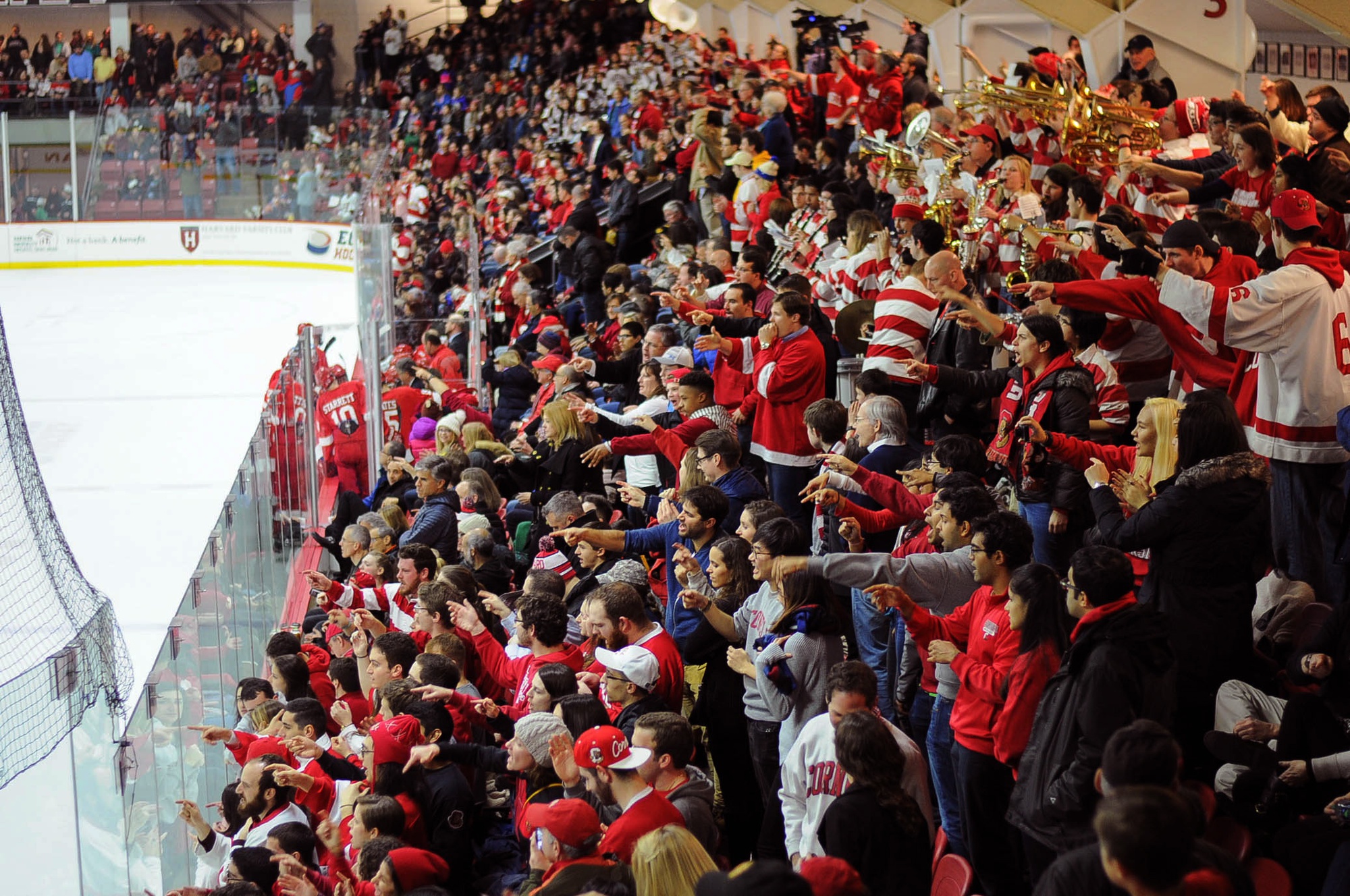 Cornell fans often refer to the Bright-Landry Hockey Center as "Lynah East" because of their tendency to pack Harvard's house with more fans than the Crimson can, as shown here a year ago. But Friday night at the real Lynah Rink in Ithaca, there'll be a complete sea of red. By Y. Kit Wu
By Jake Meagher, Crimson Staff Writer

Each time the Harvard men’s hockey team sets course for Ithaca, New York, it’s safe to presume a proclamation from the Cornell Athletic Department is on the way.

“In advance of the game, fans are reminded that there is a zero-tolerance policy in place regarding bringing fish into Lynah Rink,” reads the AD’s statement from Thursday, one day prior to the university’s sold-out bout with the Crimson.

This ‘tough talk,’ presumably nothing more than a legal requisite, never ceases to amuse. Because anyone who knows a thing or two about Cornell hockey—Ithaca’s seafood suppliers in particular—knows exactly what to expect when Harvard comes to town.

It’s a tradition that dates back to 1963 and one that required a bit of provocation. But at the very least, that provocation provides a clear answer to (a slight variation of) the age-old paradox: What came first? The chicken or the fish?

Spoiler. It’s the chicken. At a Harvard home game 54 years ago, Crimson fans changed the course of hockey history, heaving dead poultry onto the ice in what was believed to be a dig at Cornell’s College of Agriculture and Life Sciences.

Little did those rabble-rousers realize, they had triggered a war. Because the Big Red took the bait.

Beginning with a rematch less than a month after the incitement, every Harvard-Cornell contest held at Lynah since 1963 has famously featured the fish-flinging that has come to define one of college hockey’s oldest rivalries.

The goal of the Lynah faithful? Direct hits. Just prior to puck drop, all members of the student section—more accurately, the souls brave enough to smuggle seafood through the gates—rise to their feet when the enemy shows its face. Putting their precision and accuracy to the test, they then take aim at each member of the Crimson.

Yet, a plain text interpretation of Cornell’s latest advisory—one that’s been regurgitated for years—would suggest otherwise.

“The throwing of any object onto the ice before, during or after the game, or any other disruptive behavior, will not be tolerated and will result in ejection from the rink.”

Of course no one expects toleration from the administration, per se, but let’s be realistic. No one’s getting tossed—not for this anyway. In fact, a true fan would probably warn that you’re more likely to receive the boot for not following in the footsteps of the Faithful.

Besides, Cornell fans throw objects onto the ice before almost every game. Traditionally, members of the student section bring newspapers to peruse while the visiting team is being introduced by Cornell’s public address announcer. Once the introductions finish, the papers are tossed, but the hurlers are not.

Now, I’ll be honest. I don’t know how much there is to read out in Ithaca. So I’ll go out on a limb and say the bulk of these newspapers might be copies of The Cornell Daily Sun, the university’s independently run student publication.

Normally that fact would be superfluous, but this year, there’s a twist. On Wednesday, The Daily Sun ran a story revealing that Cornell’s aforementioned public address announcer, Arthur Mintz, is no advocate of the team’s rivalry with Harvard nor the fanfare that comes with it, much less the fish-flinging.

Therefore, if the Cornell crowd began gathering materials early enough this week, a heavy dose of irony could be in store for Friday night. As soon as Mintz finishes his Harvard introductions, there’s a chance the newspapers explaining his condemnation of flying fish could simultaneously find their way onto the ice right alongside—yep, you guessed it.

But irony aside, the truth of the matter is that Mintz is a member of the minority on this subject. And it’s not by accident. There’s simply no denying that the rivalry between the Crimson and the Big Red is good for Cornell, good for Harvard, and good for college hockey.

For one, these games give people a game to circle on their calendars. That goes for players, coaches, and fans alike. Heck, even announcers. As recently as 2012, NBC’s star broadcast team of Mike ‘Doc’ Emrick and Pierre McGuire was on hand to call the clash of these teams far above Cayuga’s waters.

Furthermore, things tend to get so wild inside Lynah that back in 2006, Cornell coach Mike Schafer, once a player for the Big Red, compared the “electricity” in the building when Harvard’s in town to that of what you might see when Duke and North Carolina go toe to toe on the hardwood. An article in The Crimson from 1988 made a similar claim, stating that “a Harvard-Cornell hockey game is as big and as boisterous as a Michigan-Ohio State football contest.”

Given where hockey currently stands on the totem pole of popularity within the world of college athletics, these statements may seem a tad ludicrous on the surface. But believe me: if you’re fishing for one college hockey game worth seeing and one venue worth seeing it at, it’s Harvard-Cornell at Lynah Rink.