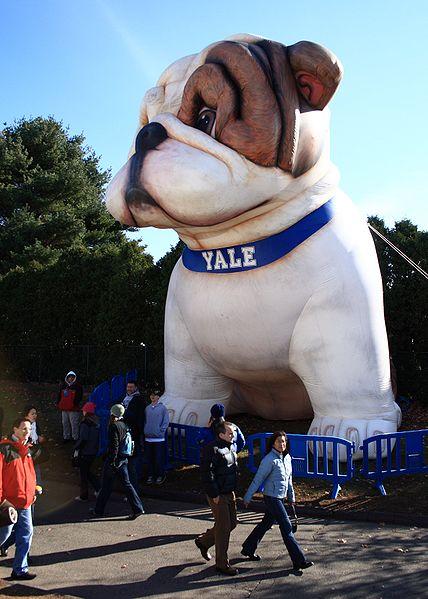 That bulldog. What a geek. By Courtesy Wikimedia commons

Harvard students weren't the only visitors on Yale’s campus last weekend. Fox Sports Network sent an intrepid reporter to the annual Harvard-Yale game and produced what strives to be a racy video segment documenting the academic (but somehow sexy?) prowess of Harvard and Yale students.

The video is much appropriately titled "Geeks Gone Wild," predictably using the Harvard-Yale tailgate as a platform from which to expose all that is intellectually flamboyant about the two schools.

Upon asking several Harvard and Yale students various questions, most of them were revealed to be—according to whomever edited the footage—“geeks,” embellished with stringent red frames. Find out why Fox Sports thinks you're a geek, after the jump.

In their defense, the students answered some pretty loaded questions. For example: "What was your high school GPA?” and “What were you involved in during high school?"

Not surprisingly, all the answers, or at least the ones shown in the final edited video, were a 4.3 or above. One student boasted a 4.49, and another rattled off an impressive list of extracurriculars such as working at the food bank, captaining a cross country and track team, being all-state in those sports, and single-handedly working to save the African continent.

Other students also demonstrated some impressive skills. One individual rattled off Pi for quite some time, and yet another solved a Rubik’s cube in the midst of a raging tailgate. Typical.

The reporter seemed to have learned a thing or two from the students, spending 99 percent of the time at the tailgate rather than at The Game.

Check out the link, “geek."