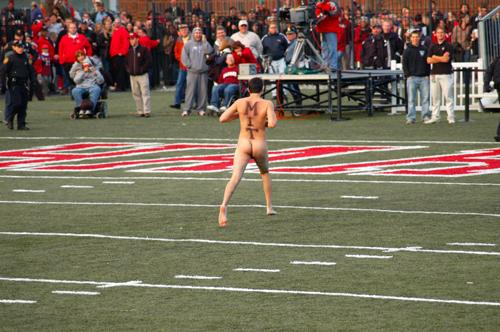 No, the party did not take place on the field. And no, there were no MIT guys there (we assume).

As some of us found out before (and during) The Game last Saturday, tailgates at Harvard look like tamed pets compared to the wild beasts of tailgates that are thrown at Yale. Back in Cambridge, as hungover students recounted their weekend debauchery, the buzz around campus was that a certain Yale party made Harvard ragers look quite tame as well.  This party was a naked party. Yep, naked. As in no clothes.

Find out how raunchy (or classy?  This is the Ivy League, after all) it got after the jump.

The party took place in a Yale a cappella house. Upon arriving, guests were given plastic bags to put their clothes in and then welcomed inside wearing only a newfound sense of liberation and their birthday suits. According to students who attended the party, it was a surprisingly non-sexual party atmosphere, with “more civilized conversation and good eye contact than at most regular parties,” according to a sophomore in Currier House. The main difference was that there was no dancing, which probably would have changed the gathering’s classification from a party to an orgy. In order to feel more comfortable in their own bare skin, partygoers sipped on a purplish drink that was “basically just pure vodka.”

The crowd reportedly consisted of about 100 people, mainly white, with a moderate ratio skew toward males (some things are the same at Harvard and Yale). It seems like this was not a one-time exposure either. The Currier sophomore said that “girls acted surprised when I told them it was the first time I’d been to a naked party.”

Apparently the crowd, which received positive reviews from those in attendance, was an attractive one. There was one fellow who was a bit too excited to be there, though: as a senior in Kirkland House told us, “the guy with the boner was asked to go into the backyard until he calmed down.”