Have We Found the Next Regina Spektor? 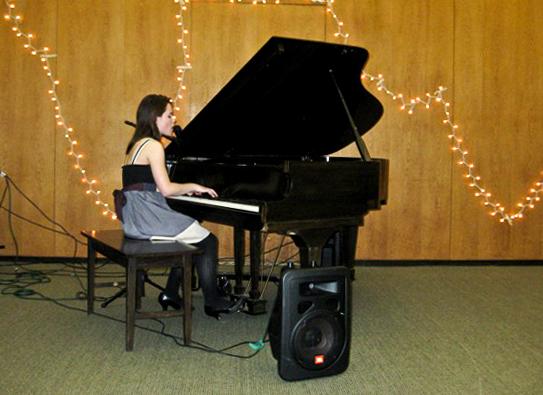 She writes, she plays, she sings...and she has her own CD? Okay, we're impressed.

While most of her peers were racing to finish Expos papers or studying for exams, Jasmine Y. Miller '13 (deemed "baby Regina Spektor" at the Freshman Talent Show that she won) was promoting her singing career at a CD release party in the SOCH Penthouse.

Strings of twinkly lights and a strategic re-orientation of the blue plush couches to face the piano gave the normally fluorescent-lit Penthouse a classy, jazz club vibe.

All the songs on her first CD, entitled "Color Me," were written by Miller, who describes her sound as "jazz-pop." At the release party, she performed songs from the CD, including "Yellow Umbrella," "To Adam," and "Color Me," but also treated the audience to a new song called "Grow a Pair."

Miller's manager Julia Mitelman '13, whom she met through the Freshman Arts Program, helped coordinate the event and introduced Miller's performance.  As she gave a long explanation of what Miller would be singing, Miller playfully cut her off to inform the crowd that Mitelman was just stalling for time while her friend got the video camera running.

In response, Mitelman joked, "It's too early in your career for you to be mean to your manager."

Miller, who treats her singing career as an extracurricular, said she writes songs about things that happen to her and her friends. "Sometimes a phrase just strikes me and I go with it," she said. "I usually come up with words and melodies when I'm in the shower or doing dishes or something, and then when enough words are there I go to a practice room and actually make a song."

You can check out Miller's work (our fave is "Color Me") on her Facebook and Myspace pages. (We also kind of like her unusual covers of 90s pop music.) Her recordings will be availabe on iTunes come January, but you can get her CD here now.