Emma Watson Spotted at The Pudding (Not the theater...) 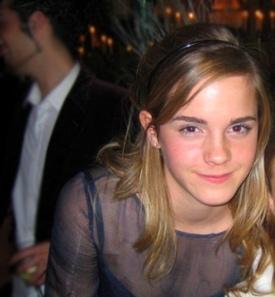 Is she politicking for "Woman of the Year" from the other Pudding?

Emma Watson, British actress best known for her role as Hermione Granger in the “Harry Potter” movies, was spotted last night at the Hasty Pudding.

Watson, who attends Brown, briefly spoke to Antonia N. Silver ’13. “She was nice and really quiet. She asked me about the finals clubs at Harvard,” said Silver.

According to Silver, Watson was quite popular with the Pudding set—partygoers practically stalked her.

“Emma came upstairs and sat down in the room in which my friend and I were sitting. People then swarmed into the room, and, as my friend and I went back downstairs, there was a queue of people trying to get upstairs to see her,” she said.

Silver added that Watson, who wore very little makeup and donned an off-the-shoulder sweater, looks just as put together in real life and as she does on screen.