The Latest in Furniture Trends 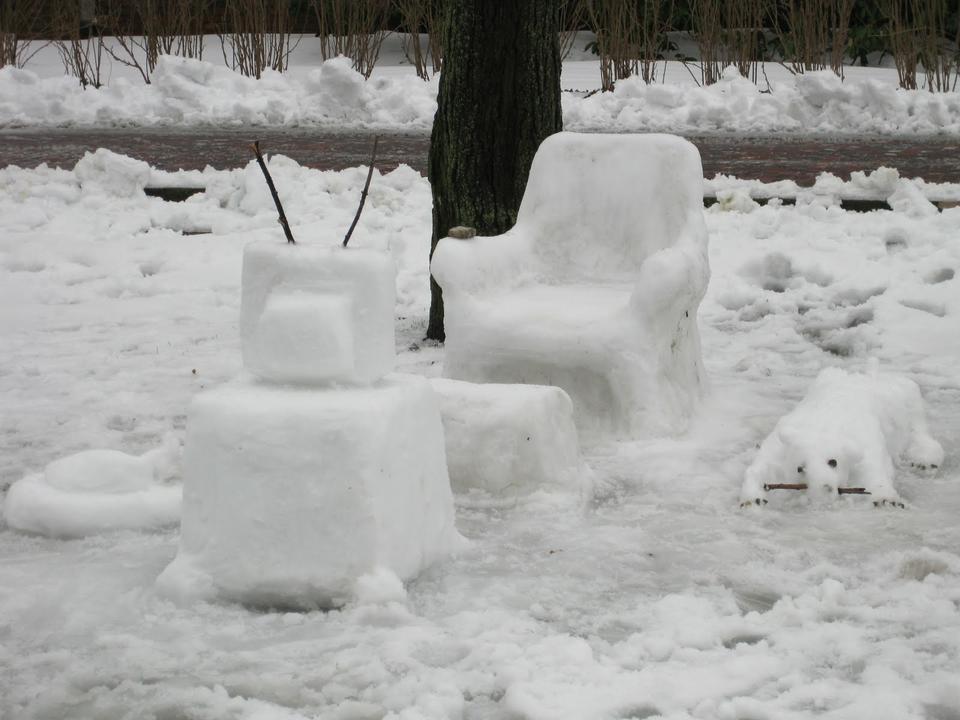 Honey, bring out the TV dinner!

If you walked by Quincy Yard this past week, you might have noticed an arm chair, a footstool, and a television set sitting under a tree.

No, this was not another attempt by President Faust to promote community in a yard space. And no, this wasn't your standard upholstery, the kind that makes you itchy all over. These particular pieces of furniture—along with the lazy cat and the sleeping dog lying around them—were made of snow.

Inspired by the desolate silence around Quincy as seniors fervently typed away at their theses in their rooms during January term, Ann E. Kurrasch '07, a Quincy house elf, decided to "cheer the place up a little bit."

"I wanted to make the students smile," Kurrasch said, "or at least look twice."

Sure enough, Kurrasch's snow sculptures got more than just looks.

What started off as just an armchair and a footstool last Saturday (she wanted to make a couch at first, but the snow wouldn't hold), turned into a full-fledged living room by Monday, with a television, a television stand, a cat, and a dog. Kurrasch said she has even received e-mails from people who've sat in the chair and put their feet on the footstool. Many people, including the mail carrier, stopped and smiled as they walked past, and even the man who was shoveling the snow in the yard kept coming back to check on her progress, Kurrasch said.

Each sculpture was created by rolling and stacking snow balls into large piles and sculpting them into the desired shapes. The entire living room took four hours to make. Ideally, Kurrasch said, she would have used a trowel—perfect for digging up snow, packing it down, and carving out details. But she didn't have a trowel handy this time, so she used a rock instead—appropriately, it was shaped liked a trowel.

But making odd and creative things is not new to Kurrasch. Her blog—About Happiness: Collected info about things I like: bakin' stuff, makin' stuff, and doin' things—houses a collection of her various innovative and artsy projects, from growing moss in a light bulb to sculpting a penguin cake.

Speaking of penguins, Kurrasch said she has plans to add a penguin sculpture (in honor of the Quincy House mascot) and some sofas to her outdoor living room before this winter is over. She also said that she encourages others to try their hand at snow-sculpting, so we at Flyby will certainly be on the lookout for more artworks around campus.