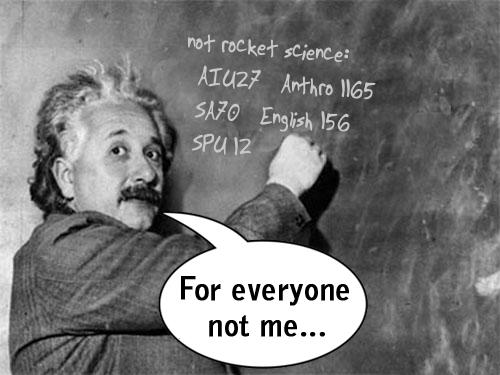 Having trouble picking a class to fill up that final slot? This third installment of our shopping week feature showcases interesting classes that aren't that hard and don't require a lot of work.

But first, the day's gossip:

We heard that the Economics 1630: "Economics of Sports and Entertainment" class was packed to almost outside the front door. However, the professor was very old and whispered when he talked, so every time the door opened, no one in the room could hear him.

In Literature and Arts B-85: "American Musicals and American Culture," which we recommended yesterday, the class watched several videos of the song "I'm Just Wild about Harry" performed by different people throughout the early decades of the 20th century. The final video was of Daffy Duck singing a Looney Tunes rendition of "I'm Just Wild about Hymie." Hymie, of course, was a kangaroo. Who knew?

In Science of the Physical Universe 12: "Natural Disasters," which we recommend below, students were told to close their eyes as the professor turned the lights off and played a loud recording. As the intensity of the sound grew, the students, we were told, felt as if they were shaking. When the lights came back on, students were shown a photo of the disaster in Haiti and told that the noise was what they would have experienced had they been physically there at the time, and that scene was what they would have seen had they been alive to open their eyes afterward. Whoa.

And now, your easy fourths, along with their Q scores:

1. Aesthetic and Interpretive Understanding 27: "Childhood: Its History, Philosophy, and Literature"

Take a break from those big, thick books, and revisit childhood favorites from Hans Christian Andersen to Roald Dahl. This course proves that you're never too old for a fairy tale bedtime story. Difficulty 2.6, Workload 1.8 | T., Th. 1. Link.

This course makes you ask and answer the question, "Wait, what did (s)he say?" Find out what old people (really old people, like ancient people) said, what they meant, and why we care about what they said. Difficulty 1.8, Workload 1.2 | T., Th. 1. Link.

An earthquake just hit Haiti. Learn about why these and other natural disasters occur, because no one, not even you can prevent natural disasters. Difficulty 2.9, Workload 1.9 | T., Th. 1-2:30. Link.

5. English 156: "Crime and Horror in Victorian Literature and Culture"

You've probably already read Wuthering Heights and A Tale of Two Cities, so this class should be a breeze. The course promises to "map the nineteenth-century British obsession with crime and horror, with phenomena that rattle one’s sense of self." Take it if you are ready to be rattled. Difficulty 2.5, Workload 1.8 | T., Th. 12. Link.