SNL Does "The Social Network" 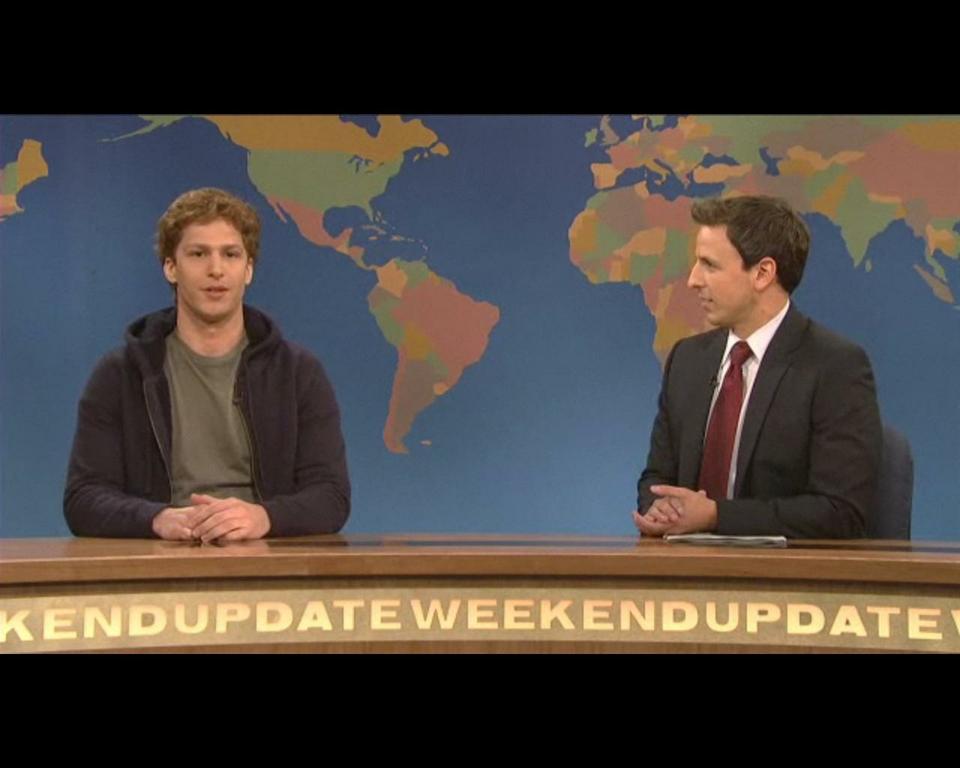 Saturday Night Live had quite the Facebook frenzy this weekend. Along with a skit entitled “Mom’s on Facebook," this Saturday’s edition of “Weekend Update” featured a guest appearance from Mark E. Zuckerberg—or rather his SNL portrayer, Andy Samberg.

Sporting his habitually callous pout, angled eyebrows, and signature drawstring sweatshirt, Zuckerberg (henceforth referring to the faux SNL counterpart) was grilled by co-anchor Seth Meyer on a wide array of predictable topics surrounding “The Social Network.” Zuckerberg rolls off the various blows delivered by Meyer, but with a little less ingenuity than we might have imagined.

For example, when Meyer inquires in the skit as to whether Zuckerberg had seen the film, the latter’s response is: “What? Don’t be ridiculous, I’m 26, I stole it online.” Like we couldn’t have guessed that.

As the parody continues, Meyer presses Zuckerberg to recognize the “inaccuracies” of the film.

Seth: “Is it true you invented Facebook just to meet girls?”

Zuckerberg: “Gee, let me think...of course I did! Why does anyone do anything? I invented Facebook, Seth. I didn’t invent ‘getting successful to meet girls’...Please, you don’t think that Aaron Sorkin doesn’t mention ‘The West Wing’ on dates?”

Seth: “Now the movie claims you had only one friend in college.”

Artfully dodging his Oprah appearance and sly donation of $100 million to Newark public schools, Zuckerberg admits to a little post-movie image boosting. But we can’t argue with his rationale: “Why does it matter? It was 100 million dollars, that’s Hoverboard money!”

Taking the end of the skit to reveal his only regret about Facebook (Poking) and that he was unfairly cast (“I mean Sean Parker gets Justin frickin’ Timberlake and I get Jessie Eisenberg?”), Zuckerberg manages to leave the interview on his own terms.

Real life Zuckerberg responded to "Weekend Update" by sharing the video on his Facebook page (how cliché). Looks like he’s taking “bad publicity is better than no publicity” to heart. Lets hope this is one of the last installments of the public’s obsession with "The Social Network."