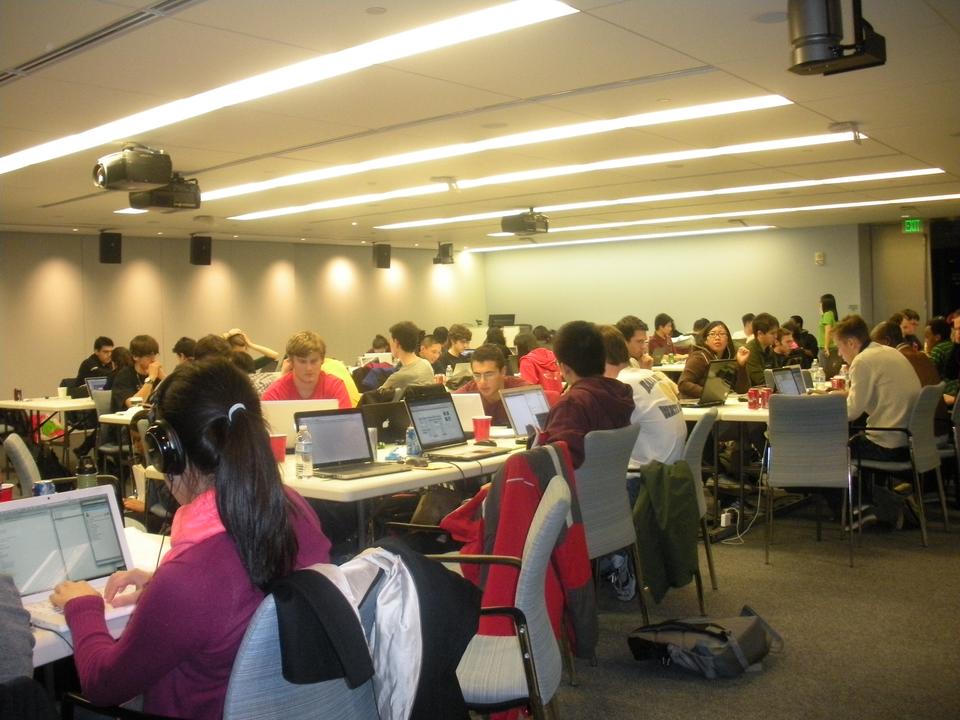 7:40 p.m.: CS50 sets out from campus. "I’ve never seen so many nerds on one bus," says one student as the shuttles leave Lamont Library.

7:56 p.m.: The shuttles arrive at the NERD. Students crowd into the elevators. They enter a wide-open room, and check in with staffers wearing "Property of CS50" sweatshirts. They crowd around a table stacked with Red Bulls and other caffeinated drinks: fuel for the all-nighter.

8:14 p.m.: "Let’s get some chairs over here," says course instructor David J. Malan '99 over the sounds of chaos, people running all around, and the Red Hot Chili Peppers in the background. Malan dashes from place to place, faintly perspiring. Many have already gotten to work. As they check in, they are asked to identify some milestones they hope to achieve. "I’m hoping to get the entire back end of our site up tonight," says Alice Xiang '13. She is designing a version of "Chat Roulette" for Harvard students. She hopes that it will be "less sketchy" than the original.

8:58 p.m.: Malan formally welcomes everyone to the event. "Coming up at 2 a.m. will be Chinese food. At 5 a.m., we will depart for IHOP if you are still vaguely awake."

9:17 p.m.: The work has begun in earnest. "I’m just trying to figure out how it all works," says Kyle S. Solan '14. He’s enjoying some free food and working on a phone application to provide information about dining hall menus, events, and campus news. The mood is becoming increasingly serious in the main hall. It’s starting to seem more and more like "The Social Network."

10:13 p.m.: People are beginning to feel right at home. One student lounges with a pizza slice in hand and nine Butterfinger wrappers scattered around him on the floor.

11:04 p.m.: Most are still hard at work, headphones in, but some have succumbed to temptation. Tony Ho '14 is taking a break from his work to play some StarCraft II. Others are playing Rock Band in the lounge. The night is young.

Sadly, this Flyby correspondent had to be back on campus before midnight, but the students of CS50 got a lot of work done on their projects before my midnight departure. Stay tuned for their final results and our video coverage of the CS50 Project Fair on Dec. 10.