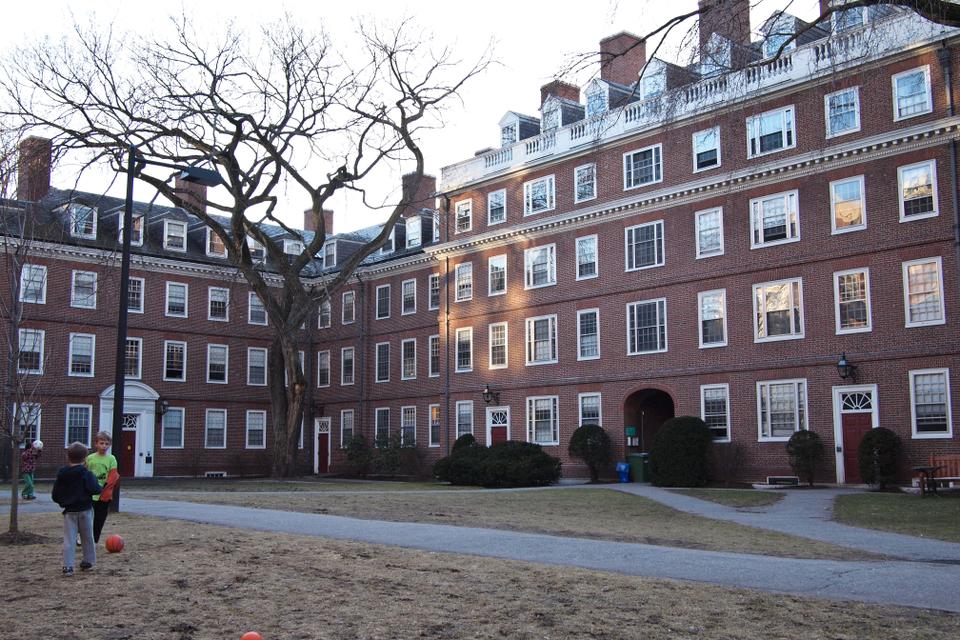 Dining Hall: The Quincy d-hall is arguably the most popular on campus, due to its proximity to the yard and the lack of restrictions on upperclass outsiders. Residents have grown accustomed to arriving at meals unable to find a seat or recognize half of the present diners. But during off-hours or Thursday community dinners, the d-hall—which resembles a ski lodge complete with floor to ceiling windows—is a homey and comfortable place to meet up with friends for a meal or to tackle that p-set. And despite their disproportionately high workload, the d-hall staff manages to stay friendly and become an integral part of the house community. The mural at the back of the room is, however, unfortunate. And by unfortunate we mean ugly and confusing.

Common Spaces: Quincy boasts a variety of common areas, although many are perpetually booked by outside student groups. The Junior Common Room is a popular location for both studying and gatherings to watch major events on the plasma screen TV. The Quincy Grille, open until 2 a.m. during the week and 4 a.m. on weekends, is an always popular and convenient choice for late night munchies—and they accept Board Plus. The Grille, which also has a TV, can sometimes be crowded, but the wait makes those mozzarella sticks taste that much better. And the ping-pong table, a relatively new addition to the lobby, is a popular after-dinner hangout spot for rookies and hardcore players alike.

Score: -50 for never getting to see the inside of the Spindell Room since it’s always booked, +350 since Quincyites have the right to kick out intruding student groups in the JCR

Rooms: Quincy sophomores, like their counterparts in many other houses, are not immune from lackluster housing conditions. Those not placed in DeWolfe will find themselves living in cramped doubles and triples in Old Quincy, often complete with awkward walkthroughs. But most residents’ suffering will be rewarded with n+1 duplex suites in New Quincy in their junior and senior years. Senior quads feature immense common rooms that are ideal for parties and many of which are furnished with bars left behind by previous occupants. You’ll also save a lot of money on pest control. This FlyBy correspondent has yet to see a single roach or mouse during her time in Quincy. Finally, New Quincy contains all the necessary amenities (most notably the dining hall), so living there means you will never have to go outside again.

Score: -400 since it gets reeeeeaaalllly cold in New Quincy during the winter, +30,000 for the good odds that you are in n+1 as a junior.

House spirit: Quincy’s house spirit takes a more friendly and laid back approach than many other houses do. Spirit never reaches the “ZOMG QUINCY IS SOOOO MUCH MORE AWSUMMM THAN YOU” level of obnoxiousness attained by other houses (Mather we're looking at you), but Quincy residents are still proud of their home. House Masters Lee and Deb Gehrke are actively involved in student life and often can be seen dining with students, opening up their apartment for Rock Band, or destroying students at ping-pong. Stein clubs are not Quincy’s strongest point, but there are events such as Field Day, the newly implemented talent show, and Assassins every spring that bring the house together for carefree fun. The House e-mail list, which once regularly featured arguments about dining hall restrictions, has been sadly quiet for the last year. Although banning freshmen from the dining hall has contributed to the peace within the house, this FlyBy correspondent admits to being somewhat bored with the lack of controversy on the House list.

Location: Quincy’s Plympton Street location isn’t far from anyplace you might need to go—except the Quad or beyond the Science Center, but those are far for everyone. You might be disappointed to be deprived a river view from your bedroom, but you’ll see the light when you realize that the Yard, Eliot, and Mather are simultaneously only five minutes away.

Score: +125 for not needing a shuttle to get to class, -50 because the airport still requires a taxi (or the T)

Quirks: The Qube library, which juts out of New Quincy and is supported on stilts, hosts its sizeable comic book collection—although you will need to ask to see it. There is also a gigantic stuffed white—gorilla, or something, we at FlyBy aren’t quite sure—that migrates around the library. Also, Quincy’s mascot, voted into existence only a few years ago, is the penguin.

Committee Rank: 7 out of 12, you're the best of the bottom half.