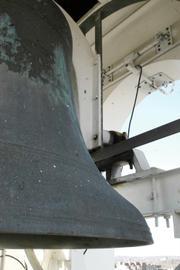 An iconic University relic had finally cracked under pressure. The Memorial Church bell, known by most freshmen as the "8:40 bell," is out of commission. But the question remains: was this a natural death or a murder?

In the days before the Memorial Bell cracked, freshmen campaigning for spots in the college's Undergraduate Council were arguing for its very removal. With suspicious slogans such as "kill the 8:40 bell," there is reason to question whether these Yard representatives had anything to do with the bell's demise.

Some of these UC reps claim that this was never their intention.

"I never committed to killing the 8:40 bell," said Elm Yard Representative Ting-Ting Liu '15.  "I'm not that violent, I promise!"

Others, however, are less than upset about the loss of the morning bell.

Harvard students, especially freshmen, no longer have a default alarm clock on weekday mornings. Many have actually celebrated the bell's death and reveled in the extra time to attach their faces to their pillows before class.

"If the bell didn't crack, I probably would have dressed up in my black Spiderman outfit and hired a bunch of students from one of the Harvard Engineering groups to bring it down and lay it on the head of the John Harvard Statue," said Oak Yard Representative Alexander J. Spencer '15.

Luckily for those students who are suffering from bell withdrawal, a plan is in the works. Although no long-term decision has been reached regarding the future of the bell, Memorial Church Epps Fellow Nathaniel P. Katz shared that "in the next week or two, a speaker will be installed in the bell tower that will toll at the same times the actual bell rang in the past."

Sorry, folks. Get all the late-morning sleep you can now because next week, the bell will be back.