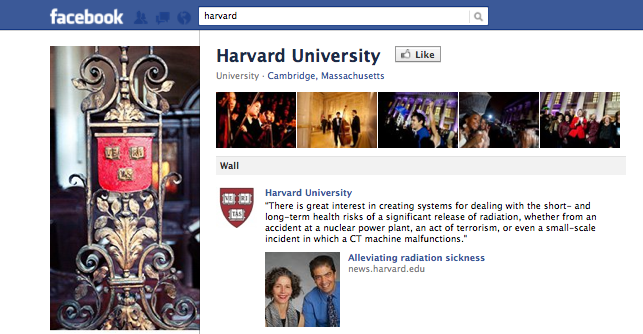 Harvard is finally getting a gift back from the social media community for which it was the birthplace—earlier this week the University became the first to receive one million likes on Facebook.

If virtual thumbs-up are a good indication of popularity, Harvard is blowing its peer institutions out of the water. According to "All Facebook, The Unofficial Facebook Resource," Louisiana State University has the second greatest number of likes: 534,637.

Drawing from the most common languages of Harvard's Facebook audience to express their gratitude, University President Drew G. Faust and Provost Alan Garber posted a special thank you video on Monday to celebrate the milestone.

"I view all of these social platforms as ways to not only present University content but also to allow people to engage," said Perry Hewitt, chief digital officer for Harvard Public Affairs and Communications and Alumni Affairs and Development. "The main thing is really saying that we as a University understand that it's really important to reach people where they are."

Harvard's Facebook page is updated twice a day on weekdays and once a day over the weekend, according to Hewitt. A web content production team pays close attention to comments and user feedback to tailor the content that is posted.

Harvard still has a ways to go to match the current Facebook page Leader—Texas Hold'em Poker has more than 53 million likes—but we are at least more popular online than our neighbors in New Haven.