Niall Ferguson, Hero of the One-Percent? 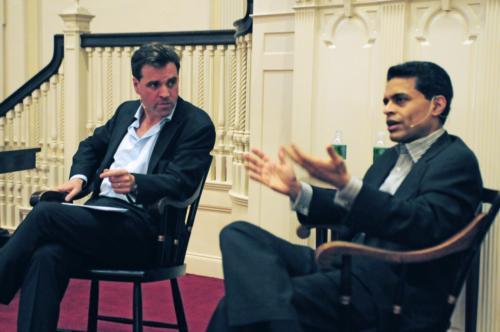 Fareed Zakaria, editor of Newsweek International, advocated a new foreign policy strategy for the U.S. at First Parish Church in the Square on Thursday.

Earlier this week on CNN’s Fareed Zakaria Global Public Square (GPS), Harvard's Lawrence A. Tisch Professor of History Niall Ferguson debated with the director of Columbia's Earth Institute and former Harvard economics professor Jeffery Sachs '76. The point of contention was the cause of inequality in the U.S. and the interests of the Occupy Movement.

Sachs sided with "the 99%" saying that "The top one percent not only ran away with the prize economically in the last 30 years, but also took the power, manipulated it, twisted it, broke the law."

Ferguson immediately responded by saying "it's important to avoid criminalizing one percent of the population … there's no question that major financial institutions have been fined and rightly so. But to turn that into an indictment of three million people seems to me … actually rather reckless."

For Ferguson the cause of inequality is not unregulated greed on Wall Street. He explained, "I think there's a legitimate argument that the biggest obstacle to social mobility in this country right now is not the fat cats of Wall Street, whom I do not rush to defend, but the teachers unions, who make it almost impossible to improve public school in cities like New York where we are today." Ferguson's argument essentially posits that because globalization is outsourcing unskilled labor to other countries, the U.S. must improve education in order to increase the number of skilled workers in the U.S. and restore the country to a more egalitarian prosperity.

In Ferguson's Oct. 25 article "Yes, Wall Street Helps the Poor," he elaborates that the remedy to education is "is to promote the kind of diversity and competition that already make the American university system the world's best. And one highly effective way of doing this is by setting up more charter schools—publicly funded but independently run and union-free." The so-called "one-percent' he says actually has helped in this cause. He references meeting a "ballroom full of New York hedge-fund managers" that were holding "a Texas Hold ’Em tournament to raise money for the Success Charter Network."

It was possibly a dubious decision for Ferguson to talk about education in terms of gambling. Similarly it was certainly ambitious for him to personally denounce Sachs during the GPS debate accusing him of having "overstepped the mark … ceased to be an academic and became a demagogue."

So yet again Ferguson has proven to be the United States' favorite social antagonist. He advocated for the Iraq War even when U.S. popular consensus felt otherwise. He championed the wonders of capitalism and market privatization in the wake of the 2009 financial collapse. And now he is decries the Occupy Movement as it gains nationwide support.

It's all right, Niall. No matter what side you take in the Occupy Movement, Harvard students still love you 100 percent. And it's definitely because of your accent.

Tags
Harvard in the WorldCelebritiesProtests