Tell Us How You Really Feel: Students Rate Occupy Harvard in Stats Survey 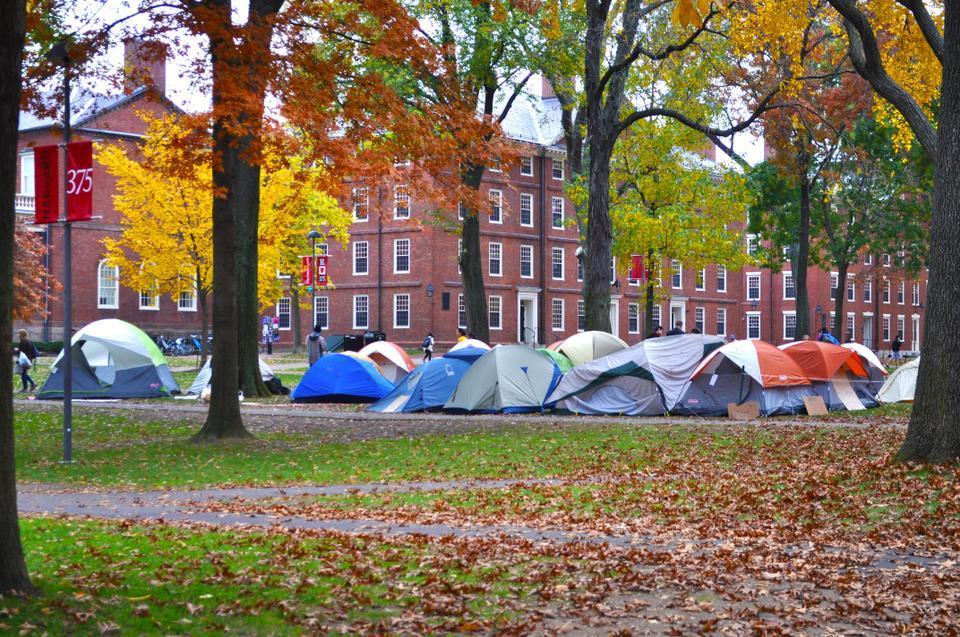 There is an eerie silence around the colorful tents and fall leaves at the Occupy Harvard movement in Harvard Yard on Thursday morning.

It has been more than a month since the tents of Occupy Harvard first appeared in the Yard, and after weeks of flashing IDs and secretly pining for the return of statue-loving tourists, students are now voicing their thoughts on the Occupy Harvard movement in a new survey. According to the results, it appears that the student body hasn't taken too kindly to our resident campers.

The survey was conducted by a group of three Statistics 104 students as their research project for the class. They collected responses from 1,035 undergraduates and asked them to rate their impression of Occupy Harvard on a scale of 0-10 (0 being strongly negative, 10 being strongly positive).

They found that the average rating of Occupy Harvard was 2.84 out of 10. Freshmen, who had the highest rate of response among the classes, rated the movement slightly lower, at 2.67, while the upperclassmen average was 2.98.

"It's a pretty divisive issue on campus. Everyone's talking about [Occupy Harvard] in the dining halls and in classes, and there's a lot of talk going around about how people feel about it," said group member Michael C. George '14, who is also a Crimson news editor. He said he hoped the survey would provide a more quantitative look at students' sentiments toward the movement.

"I wasn't expecting it to be as negative as it was," said group member Anna R. Veverica '13 of the overall campus attitude toward Occupy Harvard. She said she was also surprised that students' attitudes toward Occupy Harvard were significantly more negative than their views of the Occupy movement in general, which earned an average rating of 4.76 among freshmen and 5.08 among upperclassmen.

The surveyors found that ideology seemed to play a very significant role in students' responses. Those who identified as conservative, leaning conservative, or moderate gave Occupy Harvard a rating of 1.66 while the average rating of liberals and those leaning liberal was 3.83. George said that conservatives seemed to be very unified against Occupy Harvard, while liberal responses were more varied.

Economics, government, math, and science concentrators were also more likely to have a negative impression of Occupy Harvard, and frequency at which students had to show their IDs to guards was correlated with a more negative rating.

Factors that did not prove to be significant determinants of students' views were whether or not they voted in the 2010 elections, their distance from the Yard, how many classes they had in the Yard, whether they were international, their financial aid status, and whether they had read Occupy Harvard's "Statement of Principles."

The survey group said that although nonresponse bias did affect the results of the survey to some extent, as people with strong opinions on the issue were more likely to respond, they still hypothesize that the ratings gathered from the dataset are indicative of the general attitudes of Harvard students.

In response to the possibility of nonresponse bias, the surveyors sought to increase response rates in Pennypacker and Quincy, in hopes that comparing the general responses to a subset with less nonresponse bias would give insight into the effect of the bias.

They used tabling, personalized e-mails, and gift card incentives to drive up response rate, and found that the results from those residences were very similar to those of the entire dataset. "Our tests show that the mean of our 1,000-plus person sample was very similar to the subsets from Quincy and Pennypacker," George said. "So we think that they should be a pretty accurate representation of feelings on campus."

Still, George emphasized that only around one-sixth of the undergraduate student body participated. "While we can speculate about the Harvard population as a whole, this result only speaks for the students who responded," George wrote in an email.